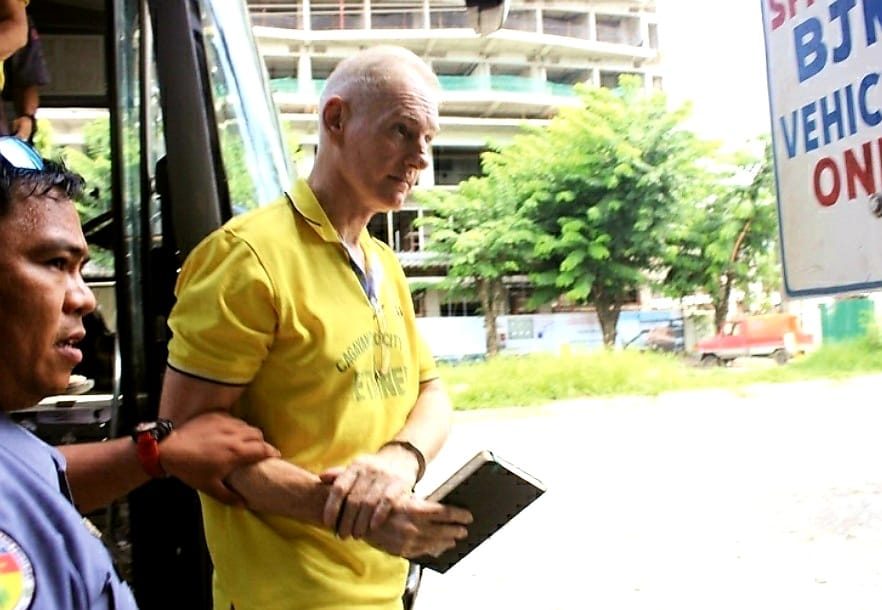 NOTORIOUS. Australian pedophile Peter Scully gets escorted to court shortly before his 2018 conviction and life imprisonment sentence in Cagayan de Oro. Another judge sentences him to another 129 years of imprisonment on November 3, 2022.

It is the second conviction of the 59-year-old pedophile from Melbourne since 2018.

Judge Ali Joseph Ryan Lloren of the Regional Trial Court Branch 37 of Misamis Oriental found the Australian guilty of attempted human trafficking, syndicated child pornography, child abuse, rape, and photo and video voyeurism, all of which were included in 60 cases filed against him in Cagayan de Oro City.

Scully was convicted, along with his Filipina girlfriend Lovely Margallo, who was sentenced to 126 years of imprisonment in a November 3 decision.

Judge Lloren also found two others – Alexander Lao and Maria Durotiya Chia – guilty of being accomplices and meted them a jail sentence of nine years each.

Regional State Prosecutor Merlynn Uy said on Monday, November 7, that it was the last batch of cases against Scully and his Filipino accomplices.

They enticed several children from poor families to his house in Barangay Bulua in Cagayan de Oro where he held and abused them on separate occasions from 2011 to 2014.

Two of the victims who escaped from Scully’s Bulua home in 2014 were street children who were held, chained at times, sexually abused, and made to dig what would have been their graves.

Their escape prompted the National Bureau of Investigation (NBI) to arrest Scully in Malaybalay City in Bukidnon in 2015.

The investigation led authorities to a Surigao City apartment where they exhumed the remains of a child in a kitchen.

That same year, Scully was also sentenced to a maximum 45-year imprisonment for five counts of rape.