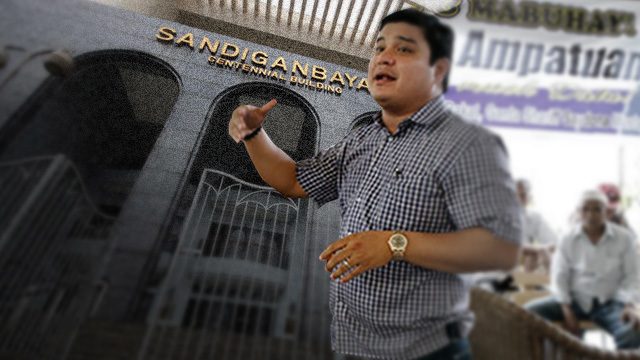 GENERAL SANTOS, Philippines – Former Maguindanao governor Sajid Ampatuan may have been acquitted in the Maguindanao Massacre case, but not in the graft and falsification cases filed against him for what he did when he was Maguindanao’s governor.

The anti-graft court Sandiganbayan found the former governor guilty of graft and falsification of public documents and sentenced him to more than a century in prison.

In a 79-page decision promulgated on Friday, January 13, the Sandiganbayan 5th Division meted the penalty on Ampatuan and five other co-accused.

The court also ordered the forfeiture of Ampatuan’s retirement benefits.

Ampatuan’s brother Andal Jr. was acquitted by the court “for failure of the prosecution to prove beyond reasonable doubt” his guilt in all the graft cases.

The former governor’s other co-accused in the falsification of public documents case – Yahiya Kandong, Omar Camsa, Anthony Kasan, Akmad Salim, Jaypee Piang – were sentenced in varying degrees, except for John Estelito Dollosa and Osmena Bandilla who remain at large.

Kandong was found guilty of two counts of falsification and was sentenced to six years imprisonment and a fine of P5,000 for each count.

Camsa, Kasan, Salim, and Piang were each meted a six-year jail term and each fined P5,000.

In 2010, state auditors conducted a special audit on the utilization of funds and implementation of projects in Maguindanao covering January 2008 to September 2009.

COA auditors found, among others, that some projects were deficient and not implemented.

Government auditors also found that fuel requirements of the projects were supplied by the Shariff Aguak Petron fuel station without the benefit of public bidding as required by law.

Auditors also found out that official receipts of fuel were consecutively issued, making it appear that the provincial government was the major, if not the sole client, of the supplier from February 2009 to November 2009.

Sajid is a member of the Ampatuan family, once the most dominant political clan in Maguindanao.

Members of the family were linked to the infamous Maguindanao Massacre on November 23, 2009. The massacre resulted in the deaths of 58 people, including 32 journalists, making it among the worst cases of election-related violence in the country. It is also the single worst attack on media workers on record.

Sajid, however, was acquitted, leaving his brothers to be sentenced to reclusion perpetua without parole in the Maguindanao Massacre case. His current whereabouts remain unknown. – Rappler.com