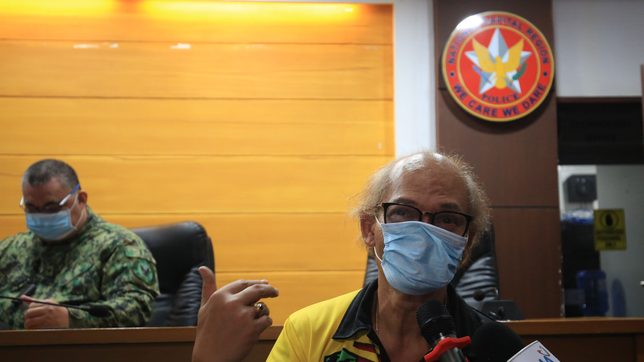 NABBED. Former congressman Ruben Ecleo Jr is presented to the media for a brief press conference at the NCRPO head office inside th Camp Bagong Diwa in Taguig City following his arrest in Pampanga on Thursday, July 30.

Metro Manila police arrested former Dinagat Island congressman Ruben Ecleo Jr  in San Fernando, Pampanga on Thursday, July 30, ending a 9-year search for the fugitive who had been in hiding since 2011.

According to the police report, the 60-year-old Ecleo used the alias “Manuel Riberal” while in hiding. Police arrested him through an alias arrest warrant issued by Sandiganbayan Associate Justice Efren dela Cruz, in relation to his graft cases.

He was arrested Thursday at a gated housing enclave in Pampanga, where he had been living under another his alias.

Prior to his arrest, Ecleo was classified as the number one most wanted person in the arrest reward list of the Department of the Interior and Local Government (DILG). Then President Benigno Aquino III had offered a P2-million reward for information leading to his arrest.

Ecleo was presented in a press conference at the headquarters of the National Capital Region Police Office (NCRPO) headquarters, Camp Bagong Diwa, in Taguig on Thursday afternoon.

Ecleo was previously convicted by a Cebu regional trial court for killing his wife, Alona. He was head of a group called the Philippine Benevolent Missionaries Association when his wife’s remains were found in a bin bag at the bottom of a ravine in Cebu in 2002.

He was arrested months later in a police raid on his home on the island of Dinagat, during which 17 people were killed.

Ecleo was bailed in 2004 and won a House of Representatives seat in 2010 — held up as an example of an infamous culture of impunity in the country, where the rich and powerful are rarely held to account.

In 2012, a year after he stopped attending the trial, a Cebu court convicted him of parricide and sentenced him to 30 years in prison.  In 2012, he was dropped from the rolls of the House of Representatives.

The Sandiganbayan sentenced him to 18 to 31 years of imprisonment after finding him guilty of illegally disbursing funds for 3 construction projects undertaken between 1991 to 1994 during his term as mayor of San Jose in Surigao del Norte. – With reports from Agence France-Presse/Rappler.com