A protest outside the Legislative Building of the Provincial Capitol while waiting for the Sangguniang Panlalawigan Session on September 27, 2021.

The ordinance stood in defiance to the Dumaguete City local government’s plan to pursue the controversial 174-hectare “Smart City” reclamation project, which will affect 4 MPAs in the city.

The “Smart City” reclamation project met widespread opposition from residents, scientists, civil and environmental groups, the church, and even neighboring local government units for the potential irreversible damage to the marine ecosystem, a major source of livelihood and income for Negros Oriental.

The provincial board members voted 12-0 to pass the ordinance in a session on Monday, September 27. The unanimous vote was way beyond the two-thirds majority required to override Degamo’s veto.

On August 23, the SP passed an ordinance that would integrate all 46 of the province’s MPAs into one network. All offshore and foreshore reclamation will be prohibited in these areas. 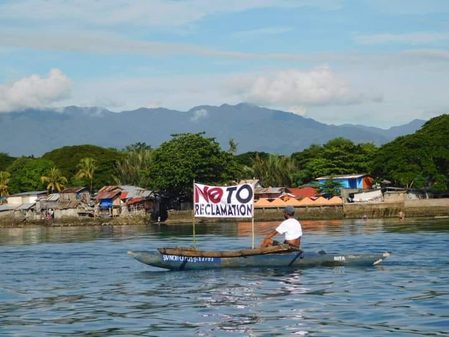 Degamo vetoed the ordinance on Tuesday, September 21. According to the governor, the ordinance would “overstep” the Office of the President’s powers to allow or disallow a reclamation project as stated in Executive Order No. 74.

“Even the Sangguniang Panlalawigan’s laudable crusade to insulate the precious gems of nature from the destructive acts of man is not a justification to allow it to exercise what it does not have or what properly belongs to a higher authority,” Degamo said in his veto message to the SP.

However, Degamo said that the veto did not mean that he was in favor of Dumaguete’s “Smart City” reclamation plan.

Golda Benjamin, a lawyer and leading advocate against Dumaguete’s “Smart City” reclamation project, lauded the move as “an act of courageous political will.”

“I’ve always said that the provincial ordinance declaring MPAs to be reclamation-free was not an exercise of jurisdiction. It was simply an affirmation of duties imposed on everyone to protect the marine environment. “This duty even falls on the PRA [Philippine Reclamation Authority] and the President,” Benjamin said in a statement posted on Facebook.

“If a reclamation destroys the environment, their powers will always yield to the duty to protect enshrined in our Constitution. The President and the PRA can never approve reclamations that will bury our marine protected areas,” the lawyer added. – Rappler.com