THRILL OF VICTORY. One Palawan primary convenors and supporters celebrate their win at the Provincial Legislative Session Hall on March 16. 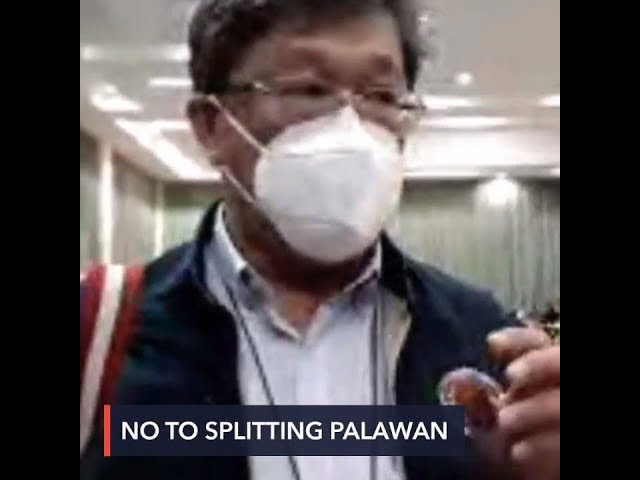 The Commission on Elections’ Provincial Plebiscite Board of Canvassers proclaimed on 5:30 pm March 16 that the “no” vote won in the plebiscite that asked residents if they agreed to ratify Republic Act 11259 which splits Palawan into Palawan Del Norte, Palawan Oriental and Palawan Del Sur.

Grassroots-initiated One Palawan, with few resources and largely reliant on campaigning in social and traditional media to gather support, described the March 13 plebiscite here as a duel between Bible characters, David and Goliath. “And David hurls a stone from his sling and hits Goliath in the center of his forehead, Goliath falls on his face to the ground,” campaigner Cynthia del Rosario earlier wrote on a Facebook status.

In a Rappler interview, Del Rosario said: “ The big lesson for the politicians who attempted to divide Palawan into 3 is to make sure that the desire actually came from the people. They need to consult and include the people from the beginning. The desire of a few cannot win over the desire of the majority.”

One Palawan was up against the provincial government, led by Palawan Governor Jose Alvarez, a business magnate and prime proponent of RA 11259, which was a reincarnation of similar thwarted proposals by politicians, one dated as early as the 1960s. When Alvarez won in the 2016 elections, he mounted a strong push to revive the proposal and met with municipal mayors, barangay chairpersons, and local business people to gather support for the bid.

In December 2017, the provincial legislature passed a resolution in support of the move. The bill breezed through Congress, passed by the House in August 2018 and the Senate in November that same year. President Rodrigo Duterte signed the bill into law on April 13, 2019, setting into motion a rigorous online and offline debate among residents.

The coalition opposition group claimed that the law contained provisions that go against the Philippine Constitution and the Local Government Code, including amendments to the natural wealth-sharing agreement, non-consultation of the the general public, and exclusion of Puerto Princesa residents in the consultation and in the plebiscite.

On June 26, 2019, One Palawan took its case to the Supreme Court, hoping a writ of prohibition would render Republic Act 11259 null and void. But the highest court, in a decision penned by Associate Justice Andres B. Reyes Jr. on March 10, 2020, ruled in favor of the assailed law, voting 15-0. The initial plebiscite schedule was set for May 11, 2020, but it was postponed due to the pandemic lockdown and only pushed through last weekend.

“We knew that it is going to be a difficult battle for us when we lost in the Supreme Court. The proponents held all the cards…We had to face them in the plebiscite knowing that the odds were not in our favor. They know the game pretty well and we didn’t. We just relied on volunteerism or ‘bayanihan’ since we didn’t have enough funds,” said del Rosario. In a press conference on March 15, Alvarez formally acknowledged the residents’ verdict, although he insisted it’s a missed opportunity for Palaweños. The provincial government had peddled RA 11259 as a solution to Palawan’s immense size with 1.5-million hectares (3.7 million-acres) — the biggest province in the country — that they see as the primary bottleneck in the delivery of public services to remote localities.

“It’s the result that cannot be changed and we fully accept it,” he said, adding that they will not mount an appeal for a recount as opposed to rumors circulating on social media.

“It’s not the provincial government that lost here but the people of Palawan for whom this law was created, though they rejected it.”

Alvarez said the provincial government will continue extending help to municipalities despite the majority of it turned down the RA 11259. Now on his last term, the leader of Palawan’s largest political party, Partido Pagbabago ng Palawan, said they are gearing up for the 2022 elections. He said he might run again for a different public position, be a kingmaker or return to his private life.

The “no” vote outnumbered the “yes” in Brooke’s Point, Roxas and Taytay towns, which had been expected to fully support RA 11259 for being designated as the centers of Palawan Del Sur, Palawan Oriental and Palawan Del Norte under RA 11259, respectively.

Meanwhile, the “yes” vote earned overwhelming support from Bataraza, a mining town in southern Palawan and its neighboring town, Rizal. It also triumphed in island towns of Cagayancillo and Culion.

One Palawan supporters have primarily celebrated the ‘no’ vote’s win online. Outside social media, some took to streets to join the motorcades in northern tourism towns of Coron (March 14) and El Nido (March 17), and the southern agriculture town of Narra (March 21), places where the ‘no’ vote won by a landslide. The same event was organized in Brooke’s Point (March 16), the supposed mother province under the defeated RA 11259.

“People have so much power but for a certain time, they didn’t know it. My role is to wake them up from [a] stupor. My message has always been about empowerment,” One Palawan’s del Rosario said. She added that the coalition of civic organizations and concerned individuals, Save Palawan Movement, will continue to highlight various political and environmental issues besetting this province dubbed as the country’s last ecological frontier. – Rappler.com