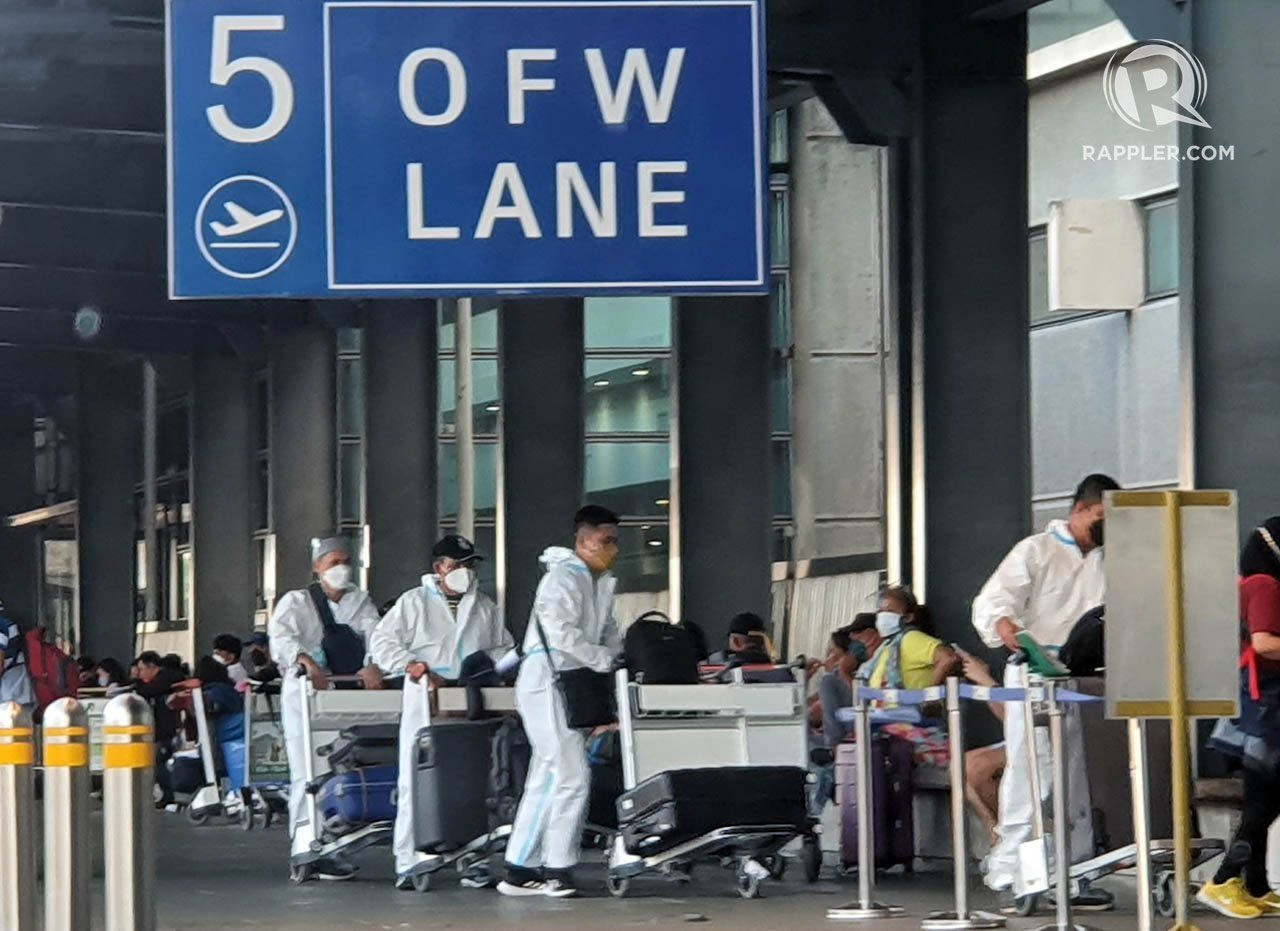 FOR SAFETY OF OFW.- Due to the continuing threat of Coronavirus in the country and the new Omicron variant, some of the departing Overseas Filipino Workers wore Personal Protective Equipment (PPE), Wednesday, December 8, 2021 at Ninoy Aquino International Airport (NAIA) Terminal III in Pasay City, Philippines Photo by Dennis Abrina/Rappler

MANILA, Philippines – The Department of Migrant Workers (DMW) on Monday, November 21, warned against individuals pretending to be middlemen in the payment of overseas Filipino workers’ (OFWs) labor claims from the Saudi Arabian government.

On Friday, November 18, Migrant Workers Secretary Susan “Toots” Ople announced that the Saudi Arabian government had agreed to pay the unpaid salaries of around 10,000 OFWs when their construction companies went bankrupt around eight years ago.

The exact process and timeline has yet to be publicly announced, as Ople said that all information released has to be concurred with the Saudi government. For now, OFW-claimants and their families must be wary of individuals or groups claiming to relay information or requirements between the claimants and the department.

(There are no middlemen here. This is a purely government to government discussion, at the heart of which is the welfare of our affected displaced OFWs. So if there are people approaching you saying, “This is the way to receive your claims immediately,” or “Give us your contact details, and we’ll give you the developments,” that’s not true.)

Ople said that the only ones authorized to discuss and report matters related to the unpaid claims are herself, and DMW Undersecretary Hans Cacdac, who is knowledgeable on the institutional history of the claims.

She asked OFWs and their families to report those posing as middlemen, which the department will report to cybercrime authorities.

The unpaid claims were one of the reasons why the Philippines suspended deployment of OFWs to Saudi Arabia in November 2021. The deployment ban was lifted on November 7, 2022. (READ: Abused, unpaid OFWs in Saudi will have right to pre-terminate contracts)

In a statement on Monday, OFW rights group Migrante International hailed the Saudi government’s move as a “victory” for the thousands of Filipino construction workers who have been waiting years for their claims.

“It is their collective action and protests that forced the Philippine government to suspend OFW deployment to the KSA (Kingdom of Saudi Arabia) and demand that they get the payment they worked for,” said Migrante.

Migrante said that the names of all construction companies responsible for non-payments should be made public. Saudi Oger Limited Company and Mohammed Al Mojil Group (MMG) are some of the biggest companies, with 8,829 and 3,454 OFW claimants respectively, according to Cacdac.

But there are also laid-off OFWs in smaller companies who have been waiting for their claims.

A relatively smaller company, Rajeh H. Al Marri & Sons Co. (RHM), has 174 claimants, according to Anton Patiag, formerly a heavy load driver with RHM. Patiag hopes that all 174 will receive their benefits.

“Nasa province pa kami, kaya sana maisama kami sa mga babayaran (We’re also in provinces, so we hope we will be included in the payments, too),” Patiag told Rappler on Monday. In 2021, the Department of Labor and Employment announced that the Saudi government would pay P4.6 billion in unpaid salaries to 9,000 OFWs.

Cacdac said on Monday that the Philippine government had spent a total of around P1 billion to OFW-claimants in financial assistance and livelihood support during the six- to eight-year waiting period.

The DMW also held a job fair on Saturday, November 19, for displaced OFWs who worked in Saudi Arabia. Of the 2,639 applicants, around 96% qualified for initial or final interview, Cacdac said. – Rappler.com