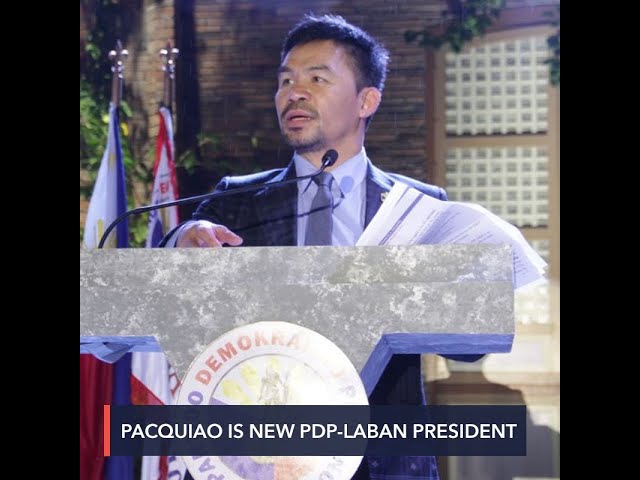 Senator Manny Pacquiao is now president of PDP-Laban, the political party of President Rodrigo Duterte, as the boxer-turned-politician is rumored to be gunning for the presidency in the 2022 elections.

These were confirmed by PDP-Laban executive director Ron Munsayac on Wednesday night, December 2.

“Senator Koko Pimentel has passed on the practical day-to-day leadership of the party to one with new, ‘modern’ ideas, and one who has the time, energy, and boldness to prepare the party for the 2022 national and local elections,” he added.

Pacquiao and Velasco were sworn into their new posts during the PDP-Laban Fellowship Night held at an events place in Quezon City. They took their oath before Pimentel.

Pacquiao’s 6-year senatorial term ends in 2022, and he is eligible to run for another term or for higher office.

Velasco in October pulled off a coup for the House speakership, deposing Taguig City-Pateros 1st District Representative Alan Peter Cayetano, also a close ally of Duterte despite being from the Nacionalista Party.

More political shifts and positioning are expected in 2021 as a prelude to the 2022 national polls, which will include a presidential election.

Talks of Pacquiao running for the country’s top post have been rife since before 2016, when he ran for senator, but he has yet to disclose his political plans for 2022.

Duterte has repeatedly urged Pacquiao in public to run for president.

“Sabi ko sa kanya one time…kami lang dalawa nag-usap, ‘Gusto kita gawing presidente,‘” Duterte said in December 2017, as quoted in an Inquirer article. (I told him, while it was just the two of us, “I want to make you president.”)

The boxer’s former promoter, Bob Arum, said in April 2015 that Pacquiao plans to run for president “in 2022, or maybe later.” – Rappler.com