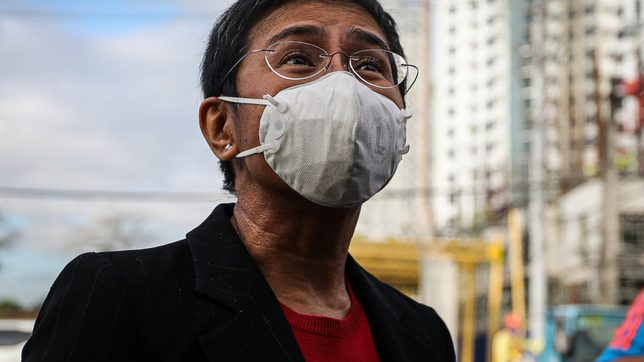 JOURNALIST. In this file photo, Rappler CEO Maria Ressa testifies before the Court of Tax Appeals in Quezon City on March 4, 2021.

Several lawmakers have extended congratulations and support for Rappler chief executive officer Maria Ressa, the Philippines’ first recipient of the prestigious Nobel Peace Prize. (READ: What you need to know: Filipinos and the Nobel Peace Prize)

Ressa was awarded alongside Russian journalist Dmitry Muratov “for their efforts to safeguard freedom of expression, which is a precondition for democracy and lasting peace,” the Norwegian Nobel Committee said.

Below are the statements of support for Ressa released by lawmakers in the Philippines. World leaders have also hailed the two journalists, as well as various advocacy groups.

Democracy lives as long as there are those willing to sacrifice for it. It takes extraordinary courage to speak the truth, but it requires even more to do so in the face of oppression.

I join the world in congratulating and honoring my fellow human rights defender and democracy warrior Maria Ressa for her unwavering efforts in fighting for the freedom of expression and of the press. It gives us all hope that in the end, truth and justice will prevail.

Maria Ressa, by her defense of the truth in journalism, has avenged the persecution and bullying of journalists, from individual beat reporters all the way to the large collective of ABS-CBN employees who were driven out of their jobs and livelihoods out of petty reprisal by those who are offended by the truth, and the minions who lick their shoes.

More than a well-deserved personal victory, this historic award is a resounding affirmation to all seekers of truth that telling the true story of Filipinos and the real state of governance and democracy is worth fighting for. Dahil kung walang magbabalita ng katotohanan, wala ring totoong pagbabagong madarama ang ating bayan.

In a tweet on Friday, October 8, the senator posted a photo of him and Ressa with the caption, “We are with you in standing up for press freedom against tyrants and evildoers.”

My warmest congratulations to Maria Ressa for the Nobel Peace Prize award. Her courage to hold power to account despite continuous threats and intimidation is truly worthy of this recognition.

At a time when freedom of expression is used as an excuse to spread lies, revise history, and spew hateful rhetoric, Maria’s relentless pursuit for truth has safeguarded what is left of our democracy.

Thank you, Maria, for bringing honor and pride to the Philippines. Thank you for representing what is best in us.

Ms. Maria Ressa deserves our congratulations for being one of the awardees of this year’s Nobel Peace Prize – the first Filipino to have this distinction.

But more than the prestige that comes with the award is the responsibility of continuing to uphold the freedom of expression – the reason for the award.

It is hoped that the Nobel Peace Prize will further inspire the responsible practice of journalism for the good of all.

Maria has made journalism synonymous with courage – raising relevant issues like the weaponization of social media and speaking truth to power like Mark Zuckerberg in Facebook’s role in manipulating public perception.

Maria Ressa has shown us what it takes to uphold press freedom. It requires courage and constancy, especially because the pursuit of truth and justice can often be dangerous.

Her unflinching trailblazing deeds, using the information platform effectively, have helped us discern beyond the news.

We hope Maria’s tenacity and passion in her mission will inspire the Filipino people, especially amid the health crisis and as we close in on another political crossroad with the national elections next year.

Her Nobel Peace Prize award solidifies her place not only as one of the country’s journalism icons, but also all over the world.

Rappler’s CEO Maria Ressa’s winning the 2021 Nobel Peace Prize for militantly protecting freedom of expression is a singular achievement of a Filipino even as it is another black mark on President Rodrigo Duterte who has been demonizing and derogating press freedom.

Ressa won the prestigious international award jointly with Russian journalist Dmitry Muratov “for their efforts to safeguard freedom of expression which is a precondition for democracy and lasting peace.”

Ressa and Rappler have been ceaselessly reporting on Duterte’s horrific war on drugs and ineffectual governance like his anemic response to the COVID-19 pandemic.

At Duterte’s behest, directly or indirectly, Ressa is facing at least seven active court cases, one of which is a prosecution for cyber libel for which she has been unwarrantedly convicted together with a former Rappler researcher Reynaldo Santos Jr. The conviction is on appeal.

It will be recalled that the Reporters Without Borders, also a nominee for the award, named Duterte among the 31 world leaders in the gallery of “Press Freedom Predators.”

The Nobel Peace Prize recognition on Maria Ressa is well deserved, yet, also a propitious one, coming as it is when in the Philippines, as well as in other parts of the world, there is a need for a strong push back on assaults against freedom of expression by tyrannical forces.

Time and again, humanity is rest assured that speaking truth to power is always a noble way to fight for a just peace! Salute to Maria Ressa and Dmitry Muratov “for their efforts to safeguard freedom of expression, which is a precondition for democracy and lasting peace.”