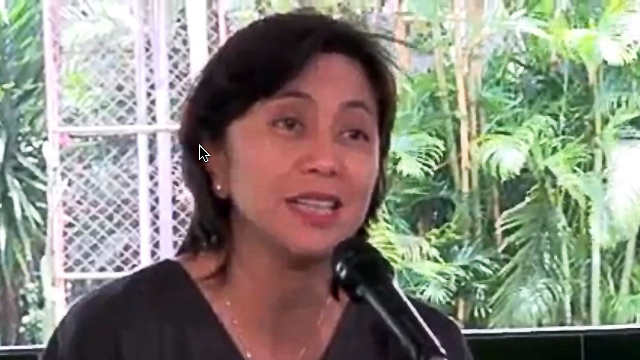 READY TO RUN. Leni Robredo speaks to the media in after her husband's death in this file photo.

MANILA, Philippines - While the candidacy of Camarines Sur 3rd district congressional candidate Leni Robredo was a decision she made as a result of public clamor, the once-reluctant bet said she has learned to embrace it.

On Wednesday, October 31, the widow of the late Secretary Jesse Robredo told Karen Davila on ANC's Headstart that part of accepting her decision is embracing the responsibilities that come with it.

She said she was sure she did not want to enter Congress, but added her husband remains her role model. The late secretary Jesse Robredo was praised for how he ran Naga City as a mayor for 18 years, and for his honest and humble lifestyle.

"Pinaka-example ko kasi yung asawa ko… pwede naman na hindi ka gagaya sa iba," she said. "Like my husband, I will do everything I can to still maintain kung ano ako dati."

(My role model is my husband. It is possible to be unlike everybody else. Like my husband, I will do everything I can to still maintain who I was before politics.)

Robredo's decision to run for Congress came less than two months after her husband's fatal plane crash on August 18.

On October 5, the last day to file certificates of candidacies (COC), Naga City Vice Mayor Gaby Bordado withdrew his nomination as the Liberal Party's bet in the 3rd district and endorsed Robredo.

Robredo ultimately decided to run after hordes of supporters, city officials and LP 3rd district candidates gathered in her home to encourage her to file her COC. Robredo said that when she thought about what her husband would have done given the same situation, she said she believes he would have done the same thing.

"Parang alam ko na ayaw niyang talikuran ko yun eh (I know he didn't want me to turn my back against it)," she said. "I knew it was the right thing to do for the district."

Robredo's 3 daughters, who were also initially hesitant about her candidacy, have since turned around to support their mother's bid for Congress.

One of the factors that convinced Mrs Robredo to run was the Villafuertes' political dynasty in Camarines Sur.

Villafuerte Sr is on his last term as a congressman, thus he decided to field his wife to run for the same post.

Mrs Robredo is running for the same position, too. The PDP-Laban is fielding its own candidate, Oscar Arcilla.

Mrs Robredo said her own daughters told her that if she refused to run, there was a big chance that Mrs Villafuerte would win.

(It would be alright if my opponent would bring the district good. But it's only like allowing the political dynasty to expand).

When asked if she would team up with the Villafuertes in the future, Robredo said they were too different in their beliefs for that to happen soon.

"Kung pareho parin and paniniwala nila ngayon, I don't think there is any chance we can work together kasi ibang iba and aming paniniwala," she said.

(If their beliefs are still the same today, I don't think there is any chance we can work together because we have very different views).

Villafuerte Sr. is widely known as the reason Robredo was never confirmed as head of the Department of the Interior and Local Government by the Commission on Appointments, after the former opposed his confirmation.

Another Villafuerte, the patriarch's nephew, also filed a disqualification complaint against Robredo when the latter ran for mayor in 2007.

Robredo admitted that she gets worried about being compared to her husband, who was given a state funeral.

While she promised to continue her husband's legacy of good governance and to legalize other initiatives he started, she emphasized she was a different person from the late secretary.

(I get worried. In beliefs, in principles, in projects we want done, we're the same. But I always tell my supporters not to expect that I can do everything he could because we're two different people. My husband was something else.) - Rappler.com