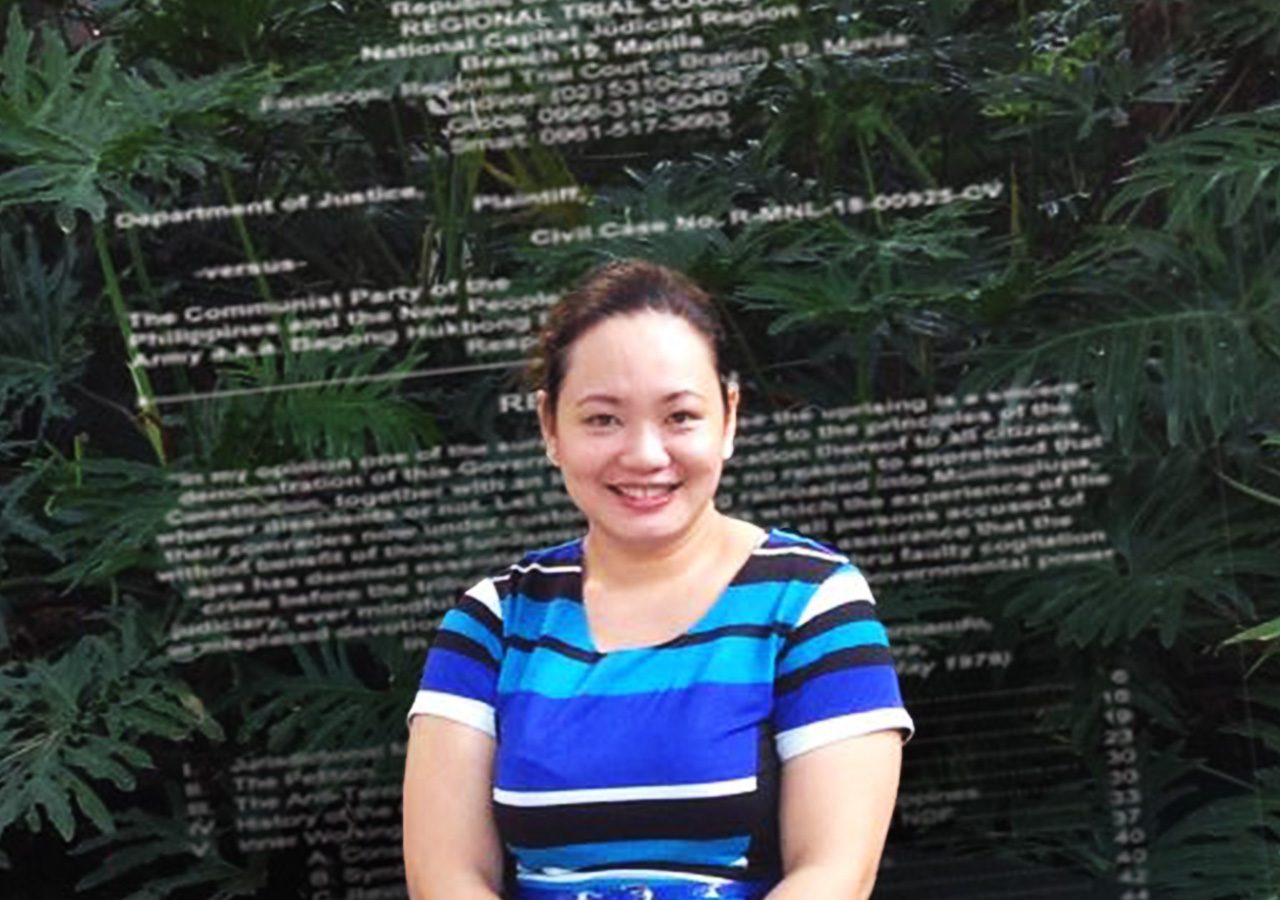 Facebook Twitter Copy URL
Copied
Get to know Manila RTC Judge Marlo Magdoza-Malagar, who dismissed the petition of the Department of Justice to declare the CPP-NPA a terrorist group

A portion  of the 135-page decision said: “Nothing is better attested by present realities than that terrorism does not flourish in a healthy, vibrant democracy. WHEREFORE, premises considered, the instant Petition is hereby DISMISSED.”

Finding insufficient evidence, Malagar junked the DOJ’s plea for a ruling that would tag the CPP-NPA as terrorist. The decision also differentiated between “rebellion” and “terrorism,” pointing out that terrorism is larger in scope than rebellion, with rebellion being only one of the various means by which terrorism can be committed.

Malagar, a lawyer from Bohol, has been serving as the presiding judge of Manila RTC Branch 19 since April 17, 2012. Prior to being an RTC judge, she was a judge at a Metropolitan Trial Court (MeTC) from 2004 to 2012.

She started her career as a lawyer in 1998 after passing the Bar, a year after she obtained her Juris Doctor and Bachelor of Laws degree from Ateneo de Manila. She worked in some law firms in Tagbilaran, Bohol and in Manila, before working under former Supreme Court chief justice Jose Vitug.

Malagar got her master’s degree in law at the University College of London and was a Chevening scholar. After almost a decade of being a judge at the first level court, she was appointed judge at a Regional Trial Court.

Aside from her judicial functions, Malagar has been involved in various projects, one of which required representing the International Association of Women Judges at an Experts’ Meeting in Bangkok, Thailand.

In her work as RTC judge, she had been exposed to the plight of women undergoing trial. In 2018, she presented a paper about the reproductive rights of women detainees in the Philippines during a summit in Lisbon, Portugal. Malagar also co-led Task Force Katarungan, a project of the International Committee of the Red Cross (ICRC), which aims to decongest jails in the country.

She also teaches law at the Institute of Law of the University of Asia and the Pacific.

Apart from her legal work, Malagar is a mother to four children and is married to lawyer Leo Malagar, deputy national statistician of the Philippine Statistics Authority, and chancellor of the University of the Philippines Cebu.

Aside from her recent court decision, Malagar acquitted two activists on November 24, 2021 from charges of illegal possession of firearms and explosives. Michael Bartolome and Cora Agovida were ordered freed after their two-year detention since their arrest on October 19, 2021.

Malagar found inconsistencies in testimonies of the policemen that indicated possible tampering of evidence. She acquitted the two activists, saying the prosecution failed to prove that they owned or possessed the confiscated firearms and explosives.

The two were among the 60-plus activists arrested in Bacolod and Manila, many of whom were eventually cleared. That massive crackdown happened in October 2019. Bartolome and Agovida were the 23rd and 24th people cleared and freed in that year alone.

In June 2017, Malagar convicted Vener Collao, then barangay captain in the fifth district of Manila, of graft charges. Collao, during his term, demanded a 30% commission from FRCGE Trading after awarding the project to the same company for the supply of materials needed for barangay projects.

Malagar, in July 2015, acquitted Temogen “Cocoy” Tulawie, a human rights defender in Sulu, of charges of alleged involvement in the May 13, 2009 bombing in Patikul, Sulu, which injured 12 persons. Among the injured was then-governor Abdusakur Tan, who sent Tulawie to jail.

The decision found Tulawie not guilty of charges due to insufficient evidence. The court also pointed out the use of rehearsed witnesses to falsely testify against Tulawie. This, the court said, resulted in evidence and circumstances surrounding the case pointing to a concerted design.

Tulawie, after his release from his three-and-a-half years detainment ran against Tan’s son for the governor post in the 2016 election but lost.

In February 2022, Malagar sentenced to life in prison six college students responsible for the kidnapping and illegal detention of a Letran student in August 2018. The police said that because there was ransom money involved, the incident could not have been a mere fraternity initiation.

Malagar, who was appointed Manila RTC judge in April 2012, has a long way to go in her judicial career. She retires in January 2043. – Ailla Dela Cruz/Rappler.com