LAUNCH. Vice President and presidential aspirant Leni Robredo at the launch of Bikoleni (Bicol for Leni), with the founder of Kusog Bicolandia Noel De Luna on February 7.

Facebook Twitter Copy URL
Copied
(1st UPDATE) 'When I ran in 2016, political parties had different lines and bets. But today, even if people come from different parties, I am able to get their support,' says the Vice President 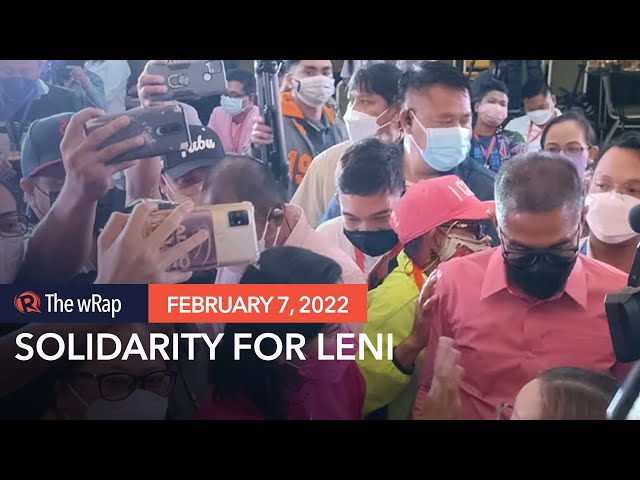 During the launch of Bikoleni (Bicol for Leni) by the Kusog Bikolandia party-list group in this city, Camarines Sur 3rd district Representative Gabby Bordado of the Liberal Party came to join the host party’s founder Noel De Luna, a challenger for his seat.

De Luna, a businessman, founded Kusog Bikolandia as “a new breed of political party” in 2018. But for the May 2022 congressional polls, he filed his certificate of candidacy (COC) under the Pederalismo Ng Dugong Dakulang Samahan. The party is affiliated with the administration of President Rodrigo Duterte.

Presidential Anti-Corruption (PACC) Chairman Greco Belgica founded the PDDS, which was Senator Bong Go’s vehicle when he filed his COC as presidential aspirant. Go has since withdrawn from the May 22 elections.

Robredo lauded the Kusog Bikolandia initiative to unify local candidates in Camarines Sur behind her campaign despite their political differences.

Robredo told reporters after the event that she sees the move among rivals a far cry from 2016, when she narrowly won the vice presidential elections against Ferdinand Marcos Jr., also a 2022 presidential aspirant.

“When I ran in 2016, political parties had different lines and bets. But today, even if people come from different parties, I am able to get their support,” she said in Filipino.

Robredo pointed out that even with Bicol politicians campaigning in 2016 for different bets, she still got 70% of the votes in the region, “and that was despite the fact na lima kaming nagke-claim na mga Bicolano kami.” (Five of us claimed we were from Bicol.

“Now, I’m the lone one from Bicol,” Robredo said.

But the vice president told reporters in a post-event interview that she wants votes not just because of her home region. In the Bicolano language, she said people trust her because they have seen her change politics.

“People now realize they have a choice to look beyond candidates’ money, to how they wield power for ordinary citizens,” Robredo said.

Responding to a question about vote forecasts for her in Bicol, Robredo said, “Hindi naman namin kinukwenta ‘yung ilang votes.” (We’re not counting votes yet.)

(But I’ve never stopped, not when I was elected Congresswoman, until I became VP. I just kept on going. I think that’s the important thing, the consistency of your actions. And you don’t just act because there are elections.)

She said volunteers, especially the youth, have shown that their dedication and hard work aren’t just for Robredo, the politician, but for their dreams of changing the ways of governance.

“This isn’t just to push for my candidacy but for the advocacies that we have long pushed – community service, tapping citizens skills and talents for fellows – different groups have been at it since October,” she said.

However, other aspirants for the contested district seat – former congressman Sulpicio “Cho” Roco of Lakas-CMD, Joel Cadiz of Aksyon Demokratiko, and Juan Agapito “Pito” Tria II, an independent candidate – did not appear in the event.

Roco is the brother of the late senator Raul Roco, who founded Aksyon Demokratiko in 1997.  Lakas-CMD is backing the vice presidential candidacy of its new member, Davao City Mayor Sara Duterte, and “adopted” presidential aspirant Ferdinand Marcos, Jr. in November 2021.

In Albay, the leader gubernatorial bets – reelectionist governor Al Francis Bichara and his challenger, Legazpi Mayor Noel Rosal, are both supporting the presidential run of their fellow Bicolano.

Bichara’s office said in a statement that the governor endorsed Robredo at the grand proclamation rally of the Robredo-Pangilinan tandem in Guinobatan, Albay on February 9.

Bichara said the entire Albay provincial board headed by Vice Governor Edcel “Grex” Lagman are backing Robredo, as well as the city mayors of Legazpi, Ligao and Tabaco; and 15 municipal mayors.

“Bichara said that the support for Robredo is not only because she hails from Bicol but she is the most qualified, capable, honest, trustworthy and caring presidential candidate,” the statement said. – Rappler.com