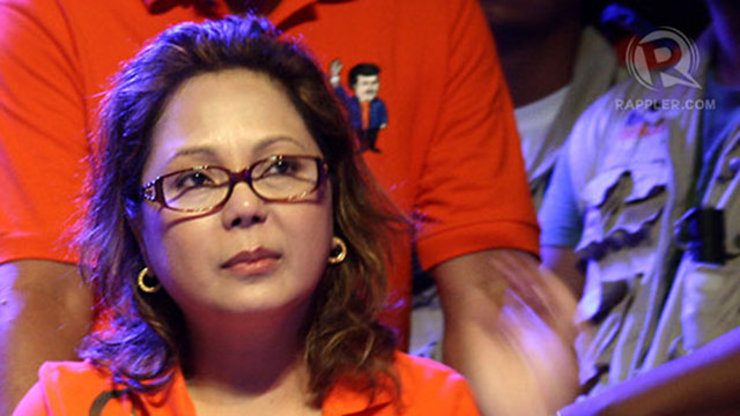 Facebook Twitter Copy URL
Copied
(2nd UPDATE) The Supreme Court says Jessica Lucila 'Gigi' Reyes was freed because of her constitutional right to a speedy trial and because she proved that her detention 'has been attended by vexatious, capricious, and oppressive delays'

MANILA, Philippines – Jessica Lucila “Gigi” Reyes, the former chief of staff of Presidential Legal Counsel Juan Ponce Enrile tagged in the pork barrel scam, was temporarily released from jail on Thursday, January 19, after the Supreme Court (SC) granted her the privilege of writ of habeas corpus.

In a statement, the Bureau of Jail Management and Penology (BJMP) confirmed Reyes’ release and said she was freed at around 6:30 pm on Thursday, January 19.

“The petition is meritorious. Petitioner is entitled to the writ of habeas corpus. Her confinement, though in accordance with a court order of the Sandiganbayan, has become oppressive thus infringing upon her right to liberty,” the SC ruling read.

Reyes, the chief of staff of staff of Enrile when he was Senate President, has been under detention in Camp Bagong Diwa in Taguig City since 2014. She was charged with graft and plunder for the alleged misuse of Enrile’s Priority Development Assistance Fund, connected with the multibillion-peso pork barrel scam.

In its ruling, the High Court’s First Division ruled that the writ of habeas corpus can be applied to all cases of legal confinement or detention. The SC noted that the writ can extend to people whose right to speedy trial has been infringed.

“While the writ is generally not available to a person whose liberty is under custody of an officer under process issued by a court or judge, when such custody becomes vexatious, capricious, and oppressive amounting to an infringement on the constitutional right to speedy trial of an accused, the writ of habeas corpus may be provisionally availed of,” the First Division ruled.

“Otherwise stated, when the custody of a person becomes illegal due to the grave abuse of his or her constitutional rights, the person deprived of liberty may avail of the writ of habeas corpus.”

The court also gave at least four points as to why the privilege of writ was granted on the ground of violation of constitutional right to speedy trial. First, the SC said the most basic criterion is that a person must be illegally deprived of his or her freedom.

The SC, as second point, said the writ can be issued when there is a deprivation of a constitutional right “resulting in the restraint of a person.” As third point, the High Court also gave three grounds as to when the right to speedy trial has been violated. This includes “long period of time is allowed to elapse without the party having his or her case tried.”

Fourth and last, the SC said the granting of the writ of habeas corpus is not based on merits of the case, but to provide “provisional liberty” to protect the petitioner’s constitutional right. “This remedy is rooted on the determination that the accused’s detention has been attended by vexatious, capricious, and oppressive delays,” the High Court added.

The SC also noted in its decision that the granting of temporary liberty through the extraordinary writ does not involve the mother or principal case, and that the case can proceed independently. On why Reyes was able to avail the writ, the SC said she proved that her detention had become “vexatious restraint.”

The court added: “While such order is lawful, petitioner’s continued detention had become an undue restraint on her liberty due to the peculiar protracted proceedings attendant in the principal case.”

The privilege of writ of habeas corpus is usually granted to those illegally arrested. The SC ruling now set the guidelines on temporarily release using the extraordinary writ, according to lawyer Kristina Conti.

Meanwhile, former SC spokesperson Ted Te said since the High Court did not designate the ruling as pro hac vice (in this instance only), others like detained former senator Leila de Lima can file a similar petition as a “test.”