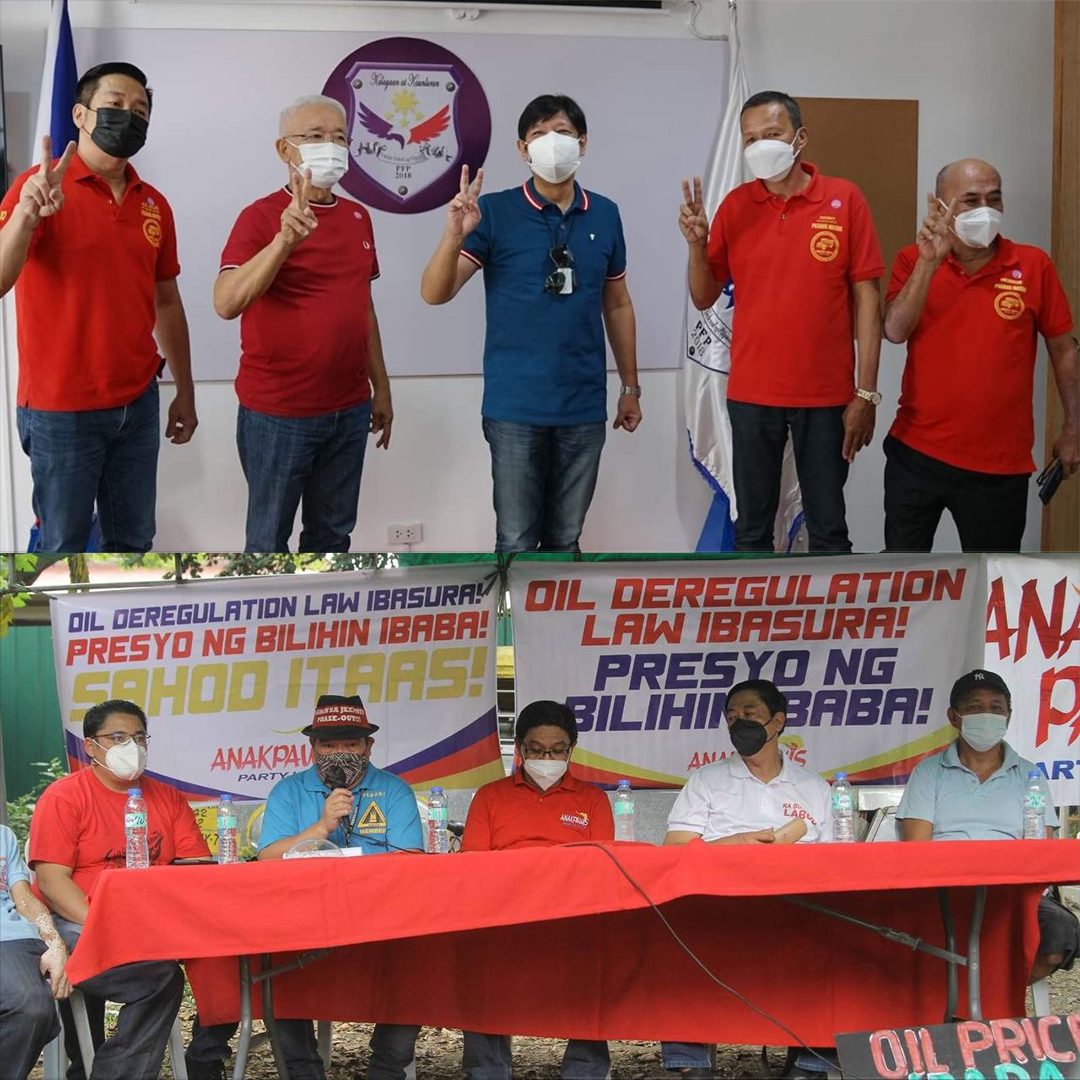 Transport group Pasang Masda has thrown its support behind the candidacy of Ferdinand “Bongbong” Marcos Jr for president in 2022, but the activist faction of the transport sector is not buying the dictator’s son’s promises, including his recent call to suspend excise tax on oil.

Pasang Masda national president Obet Martin, a Marcos loyalist, said their endorsement of Bongbong Marcos is a recognition of what his father, the late dictator Ferdinand Marcos, had done for their sector.

Martin, who calls Marcos his “favorite president,” cited the establishment of the Office of the Transport Cooperative in the ’70s and ’80s, which was closely supervised by former first lady Imelda Marcos.

(President Marcos gave attention to transportation. Pasang Masda was the first to have a jeepney for drivers program with the help of President Marcos.)

But Mody Floranda, national president of the progressive Piston group, said the cooperatives were the dictator’s tactic to put the sector under his control.

“Kahit sa panahon ni Marcos minimal lamang ‘yung pumasok sa kooperatiba dahil parang corporation, para ma-kontrol ng gobyerno ang public transport,” Floranda told Rappler in a phone interview. (Only a few joined the cooperatives during the time of Marcos because it was like a corporation whose aim was for the government to control public transport.)

After firming up the alliance with Pasang Masda and other groups, Marcos said on Thursday, October 21, that he was calling on the government to suspend excise tax on oil to cushion the impact on public transport drivers. It was a call that presidential aspirant Isko Moreno would later say that Bongbong stole from him.

In reality, the idea did not originate from either Moreno or Bongbong Marcos.

For years, the leftists have been calling for a repeal of the oil deregulation law under then-president Fidel V. Ramos, which they said had allowed oil giants to manipulate prices to the detriment of consumers.

Marcos said: “Amending the oil deregulation law with the intent of addressing the issue of runaway oil prices will take some time.  This move to suspend the excise tax makes sense and will have an immediate positive impact on our people.”

While Piston, as well as its umbrella organization Makabayan, can get on board with the immediate response to suspend excise tax under Train Law if only to stop the bleed, Floranda said Marcos seems to be singing this tune only because he’s running for president.

Floranda pointed out that Marcos was in Congress for many years and was in a position to move to repeal or amend the oil deregulation law, or scrap the 12% VAT.

(For how many years was Bongbong Marcos senator? Why just now when he should have done this a long time ago – to suspend or scrap the law? We think it’s just about Bongbong’s politics.)

Marcos was representative of Ilocos Norte 2nd District for two terms until 2010, and was senator from 2010 to 2016.

Asked what Marcos has done for the transport group in the past, Martin said: “Nung senador siya, nakatulong siya sa amin, dinidinig niya ang problema namin at kahit paano nakaramdam kami ng tulong.” (When he was senator, he has helped us, he would listen to us so we felt we got help from him.)

Martial Law under the older Marcos was marked with human rights abuses and rampant corruption that plunged the Philippines into an economic crisis and poverty. These have been proven in court decisions since the restoration of democracy in 1986.

But the Marcoses have remained popular over the years, keeping their loyal base and getting new ones aided by a network of social media propaganda, as Rappler’s investigations have shown.

Martin insisted that the Philippines was in best form under Marcos.

Pasang Masda and Piston have always been on the opposite ends, with the former supporting the modernization of jeepneys. Piston, on the other hand, led nationwide strikes to oppose the modernization program which they said would leave many drivers behind because of upgrading costs.

As oil prices soar, Pasang Masda pitched a now-rejected P3 fare increase while Piston remained firm that the solution would be to, in the short term, suspend exicse tax under Train Law, and in the long term, scrap the 12% VAT and the oil deregulation law.

Floranda and other labor leaders under Makabayan bloc held a press conference on Friday, October 22, to announce a caravan on Monday, October 25, to increase pressure on Malacañang to respond to their calls. – Rappler.com