FACEOFF. Nexgreen Enterprise owner Jasper So holds a dialogue with Russel Mañosa, the former employee who complained about receiving his salary in centavo coins, during the meeting facilitated by Valenzuela Mayor Rex Gatchalian on Wednesday, June 30, 2021.

The Valenzuela city government has suspended the business permit of a factory that paid a former worker his salary in low-denomination coins, among other violations.

Mayor Rex Gatchalian ordered the 15-day suspension of the business permit of Nexgreen Enterprise following a livestreamed dialogue that he facilitated between factory owner Jasper So and former employee Russel Mañosa on Wednesday, June 30.

Mañosa had sought the help of the city government after he received from the factory his two-day salary worth P1,056 in centavo coins.

During the meeting, Gatchalian grilled So over the incident.

(Why did you pay the employee with centavo coins? That’s insulting for an employee who worked hard to earn money.) 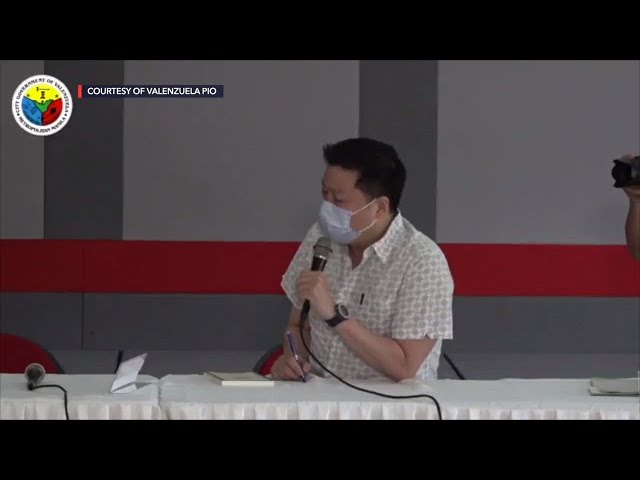 So explained that it was not intentional.

(The coins were not intended for him. It’s for my religious thing. Regardless, if a mistake was made, it’s my command responsibility. I won’t contest the allegations.)

But Gatchalian was unconvinced.

“Sa personal kong pananaw, hindi siya aksidente. Nagkainisan kayo, uminit ulo mo, at pinagdiskitahan mo (In my view, it was not an accident. You got annoyed with him and took it out on him),” Gatchalian said.

Under BSP Circular No. 537, the maximum amount of coins that can be considered as legal tender is P100 for denominations of one centavo, five centavos, 10 centavos, and 25 centavos.

The city government also called out the factory for not giving Mañosa the correct pay.

A computation by the Valenzuela’s workers affairs office showed that Nexgreen Enterprise has yet to pay Mañosa P55,614 for his four months of service in 2019, and another month of service from May to June 2021.

The stop order issued by the city’s business and licensing permit office following Wednesday’s meeting cited the following violations committed by the factory:

The business could face permanent closure if it fails to settle its deficiencies within 15 days.

For Mañosa, things would not have escalated if the factory owner just treated him properly.

(We would not have reached this point if you just paid me properly. I came back to you respectfully, you could have given me my wage fairly.) — Rappler.com