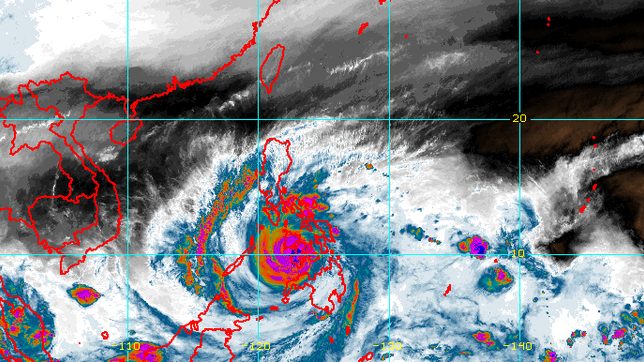 Facebook Twitter Copy URL
Copied
Typhoon Odette (Rai) is in the vicinity of Carcar, Cebu, late Thursday evening, December 16. More rain is ahead for areas in the typhoon's path.

MANILA, Philippines – Typhoon Odette (Rai) had already made landfall at least seven times on Thursday, December 16, with its fifth and sixth landfalls in Bohol and its seventh in Cebu.

The Philippine Atmospheric, Geophysical, and Astronomical Services Administration (PAGASA) said in its 11 pm bulletin on Thursday that Odette was in the vicinity of Carcar, Cebu, where it made its most recent landfall.

These are the seven areas:

The typhoon accelerated late Thursday evening, moving west at 35 kilometers per hour from the previous 30 km/h.

From a peak intensity of 195 km/h in the afternoon, Odette has also weakened, though it remains a powerful typhoon. Its maximum sustained winds were down to 175 km/h as of 11 pm on Thursday, with gustiness of up to 240 km/h.

Tropical cyclone wind signals remain in effect, with Signal No. 4 still the highest.

Meanwhile, PAGASA updated its rainfall forecast for the typhoon, with torrential rain now concentrated in parts of the Visayas after the initial onslaught in Mindanao.

The weather bureau also said there is a “moderate to high risk” of storm surges up to 3 meters high on Friday, December 17. Storm surges “may cause life-threatening flooding in the low-lying coastal areas of Central Visayas, Iloilo, Antique, Guimaras, Negros Occidental, and several localities in the northern portion of Palawan, including Calamian, Cuyo, and Cagayancillo Islands.”

On Friday, moderate to very high seas will persist in the seaboards of areas under tropical cyclone wind signals. Waves will be 1.2 to 10 meters high, making travel risky for all vessels.

Another gale warning was issued due to Odette and the northeast monsoon or hanging amihan as well. This gale warning covers coastal waters not under any wind signal in the seaboards of Northern Luzon and in the eastern seaboards of Central Luzon, Southern Luzon, and Davao Oriental. Waters are rough to very rough, with waves 2.8 to 4.5 meters high.

The remaining seaboards of the Philippines not under any wind signal will continue to have moderate to rough seas on Friday. Waves will still be 1.2 to 3.1 meters high and conditions remain risky for small vessels.

After its first seven landfalls, Odette will cross Negros Island, pass over the Panay Gulf close to Guimaras, and pass over the southwestern coast of Panay Island before emerging over the Sulu Sea on Friday morning.

Then the typhoon could pass near or in the vicinity of Cuyo or Cagayancillo and cross the northern or central part of Palawan on Friday afternoon before emerging over the West Philippine Sea.

Finally, Odette may pass the vicinity of Kalayaan Islands on Saturday, December 18.

PAGASA added that Odette could slightly weaken further as it crosses the western part of Visayas and mainland Palawan, but will remain a typhoon.

Once over the West Philippine Sea, Odette is likely to reintensify. But weakening could resume on Sunday, December 19, as the typhoon “becomes exposed to increasing vertical wind shear and the surge of the northeast monsoon.”