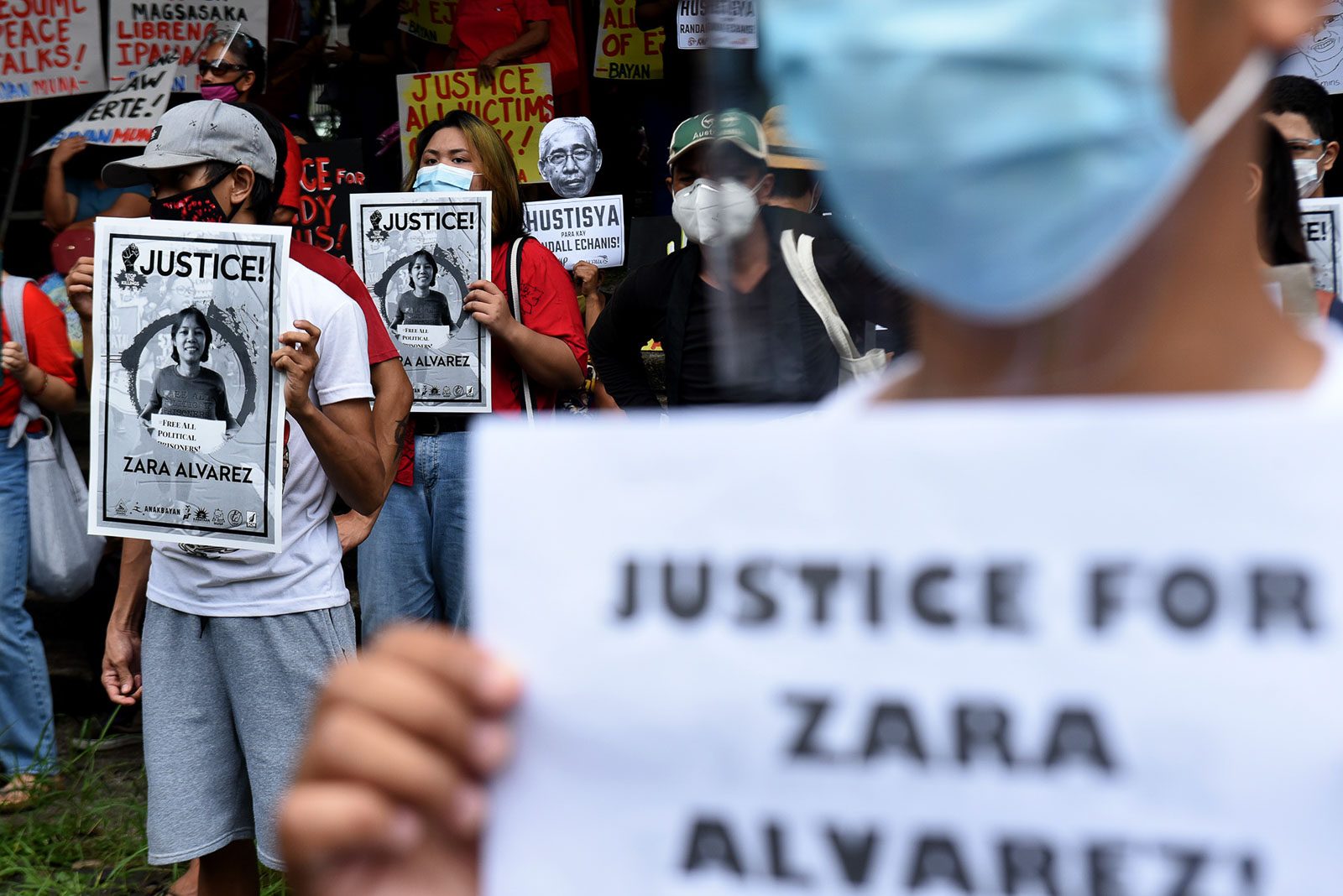 Militant groups gtaher the at the Bantayog ng mga Bayani in Quezon City to commemorate the Global Day of Action Against Tyranny on August 19, 2020, denouncing the spate of the recent killings of activist leaders.

Facebook Twitter Copy URL
Copied
'We are not simply revolted or frustrated. We are disgusted. We are angry.'

Activist Zara Alvarez asked for protective writs, and she went to the court for these. She was denied, and then she appealed. But on August 17, her wait came to a fatal end. A gunman pumped 3 bullets on her back and finished her off while sprawled on the pavement in Barangay Mandalagan, Bacolod City.

Another life lost for the embattled progressive groups.

On May 6, 2019, rights group Karapatan, women’s group Gabriela and religious group Rural Missionaries of the Philippines (RMP) went to the Supreme Court and filed a petition for the writs of amparo and habeas data.

The privileges of these writs, if granted, would give all members of the groups protective orders (for Amparo), and would compel the government to destroy information against them (habeas data.)

The protection order, which is a form of restraining order, was requested against the entire military sector, and Malacañang officials such as Undersecretary Lorraine Marie Badoy, who is the spokesperson of the National Task Force to End Local Communist Armed Conflict (NTF-ELCAC).

Alvarez, former campaign and education director of Karapatan-Negros, was going to be a witness to testify on the vile red-tagging of the government against her, her colleagues in Negros and across the country.

Their petition documented harassments against them. There were posters vilifying them, incidents of tailing, and threatening messages. They juxtaposed these with public statements of the military officials calling them communist fronts.

The Supreme Court, by procedure, granted the writs and gave the case to the Court of Appeals. In the CA it was heard for the purpose of determining final judgment – to grant the privileges or not. A writ is a procedural step, a paper to compel the respondents to explain; the privilege is the final judgment, in this case, a protection order.

But because of procedural misunderstandings at the CA, Alvarez and the other witnesses were not allowed to go on the stand. The CA proceeded without hearing them, and in June 2019, denied the petition.

“There is no evidence that petitioners have been susceptible to harassment and to increased police surveillance because of the gallery,” said the CA 14th Division on June 28, 2019.

This denial is on appeal at the Supreme Court, and has not been decided yet, said the groups’ lawyer Edre Olalia of the National Union of Peoples’ Lawyers (NUPL).

But Alvarez is now dead. So is human rights worker Ryan Hubilla, who was also supposed to be a witness. He was killed in Sorsogon on June 15, 2019, 3 days before the hearing at the CA.

“We are not simply revolted or frustrated. We are disgusted. We are angry,” said Karapatan Secretary General Cristina Palabay on Thursday, August 20.

The denial of Karapatan’s petition at the CA was just among a streak of losses not just for activists, but also for administration allies. This showed how these writs have grown weaker in the time of President Rodrigo Duterte.

Envisioned to be extraordinary writs, and created in 2007 precisely to address killings and disappearances of activists during Gloria Arroyo’s time, these writs have been “ineffective” in the last few years because of different interpretation of procedures. (PODCAST: Law of Duterte Land: Are extraordinary writs still effective in the time of Duterte?)

In Alvarez’s and Karapatan’s case, the Court of Appeals said the activists were not able to sufficiently prove that the respondents – the government – were behind the harassments.

Alvarez was also going to testify about how the Department of Justice (DOJ) itself branded her a communist and a terrorist when it included her name in a list in a proscription case for the Human Security Act at a court in Manila.

This case was still pending but the list has been trimmed down to only 2 people –  exiled Communist Party of the Philippines founding chairman Jose Maria Sison and alleged Mindanao Commission Secretary Antonio Cabanatan.

The Human Security Act has been replaced by the feared anti-terror law, slammed as a grave threat to fundamental freedoms of Filipinos.

Malacañang said the government should not be blamed for Alvarez’s death, or for the killing of Anakpawis chairman Randall Echanis.

“Blaming state forces as the people behind these murders is unfounded as investigation on the killings of Randall Enchanis (sic) and Zara Alvarez is now underway,” said Presidential Spokesperson Harry Roque, a former human rights lawyer.

Those investigations, said Karapatan, leave much room for doubt, much more, trust.

“Not a single case on the killings or disappearances of activists can be trophied by this administration or its Administrative Order No. 35 task force,” said Karapatan, referring to the DOJ’s AO 35 task force, a special unit to investigate politically-motivated killings.

The AO 35 task force was already in thick of its work analyzing killings in Negros – something Alvarez was also working on independently, when the activist died, her own murder now forming part of that investigation.

“We are left with no choice but to work with some domestic mechanisms like the Commission on Human Rights (CHR) and independent international mechanisms to pursue accountability and justice,” said Karapatan.

The CHR in July said Duterte “created a dangerous fiction that it is legitimate to hunt down and commit atrocities against activists because they are enemies of the State.” (READ: Duterte ushers in new level of danger for activists, human rights defenders)

The United Nations said in 2018 that Philippines was among 38 countries where activists were subjected to government-abled “alarming and shameful levels of harsh reprisals and intimidation.”

In the time of Duterte, Karapatan has documented 182 killings of activists and human rights defenders, and 136 killings of people involved in grassroots work.

Would a court remedy have saved Alvarez? No one knows, but Karapatan said at least it could have provided “succor.”

Without the courts, they are on their own.

“We are left with no other choice but to steel and strengthen our resolve and work for people’s rights,” said Karapatan. – Rappler.com