FALSE: ‘No poor Filipino’ during Martial Law, only during the Aquinos’ terms

Oct 15, 2019 4:05 PM PHT
Rappler.com
Facebook Twitter Copy URL
Copied
Government data show poverty incidence was high during the Marcos regime, and it was on a downward trend after the late dictator was ousted 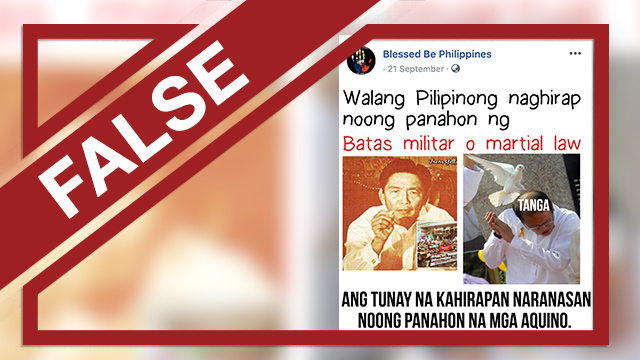 Claim: Nobody was poor during Martial Law and the “real poverty” happened during the Aquinos’ terms.

At the bottom, another statement read: “Ang tunay na kahirapan naranasan noong panahon [ng] mga Aquino.” (Real poverty was experienced during the Aquinos’ terms.) The post has gotten over 1,100 shares, 1,600 reactions, and 163 comments as of writing. A reader emailed the post to Rappler for fact checking. Rating: FALSE The facts: The earliest official poverty data from the Philippine Statistics Authority (PSA) is for 1985, or the year before the late dictator Ferdinand Marcos was ousted. It shows that poverty incidence in families that year was at 44.2% – 4.3 percentage points higher than in 1991, when Corazon Aquino was the president. By 2015, during Noynoy Aquino’s term, poverty incidence in families only stood at 16.5%. The PSA tracks poverty data every 3 years.

While these two series are not comparable, they still show that poverty was high under Marcos. A World Bank report in 1995 shows that poverty incidence was already high before Marcos came into power, but it barely changed during the first half of his term where more than half of the population was considered poor.

Underemployment, which contributes to poverty, also spiked during Martial Law and the rest of Marcos’ term, contrary to Blessed Be Philippines’ post. This indicates that the work conditions in the country deteriorated more under the Marcos government compared to the Aquinos’.

Underemployment is when people have work, but want additional working hours or an additional job for better pay. Though underemployment in the country was low during the early years of the Marcos administration, it hit the highest level in Philippine history towards the end of his term.

“From the perspective of poverty, underemployment is a bigger problem than unemployment. The underemployed face the highest risk of poverty. The visibly underemployed (those who work part-time) are the most vulnerable to poverty. They are twice as likely to be poor as the fully employed,” the World Bank wrote in a 2016 report.

This is not the first time Rappler has fact-checked Blessed Be Philippines. In November 2018, the page also posted a false claim comparing the national debt of the Philippines under the Arroyo, Noynoy Aquino, and Duterte administrations. – Pauline Macaraeg/Rappler.com