Claim: No other former Philippine president after Ferdinand Marcos developed and built mass transit projects in the country, according to Facebook page Sangkay Janjan TV.

The page posted a screenshot of an article about Presidential Spokesperson Salvador Panelo, saying the country’s public transportation problems stemmed from previous administrations. 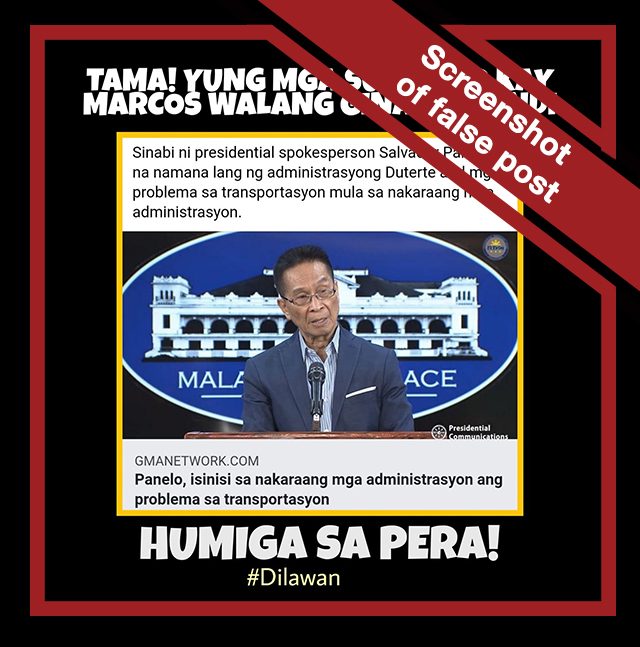 In his caption, Sangkay Janjan TV agreed with Panelo’s statement and said that except for Marcos, who was ousted in 1986, no other former Philippine president after him built mass transit projects that could have avoided the traffic congestion problems in the country today.

Sangkay Janjan TV shared the post on October 10, 2019 and got over 1,400 shares, 2,100 reactions, and 505 comments as of writing. Rappler spotted the post via social media monitoring tool CrowdTangle.

The facts: It is not true that only the late dictator Ferdinand Marcos built projects for the country’s mass transit system. Despite the current state of Metro Manila’s public transport system, several other presidents after him developed public transportation projects that are used by Filipinos today.

Mass transit is defined as the transportation of large numbers of people, especially within urban areas. This includes not only trains but also buses, subways, and other modes of public transportation.

Currently, Metro Manila has 3 functioning train systems: Metro Rail Transit System (MRT Line 3), Manila Light Rail Transit System (LRT), and the Philippine National Railways (PNR). The LRT Line 1 was opened in 1984 and was indeed a project of Marcos. However, LRT Line 2 and MRT Line 3 were developed after the late dictator was ousted. Meanwhile, the PNR already existed way back in 1891, before the Marcos administration. The MRT Line 3 started construction in 1997 during Fidel Ramos’ term after the Metro Rail Transit Corp (MRTC) signed an amended turnkey contract. It officially opened in December 1999, during Joseph Estrada’s term. The LRT Line 2 also started construction during Ramos’ term in 1997. It officially opened in 2003, under the administration of Gloria Macapagal Arroyo. Arroyo also initiated the Strong Republic Transit System in 2003, which integrated these existing railways for a more seamless commute.

Further, premium point-to-point (P2P) buses were introduced in 2015 during former president Benigno Aquino III’s term. These are non-stop buses found in 56 stations to date, spread from Pampanga to Laguna.

As of 2019, there are also at least 6 new railways to look out for under the Duterte administration.

This is not the first time Rappler has fact checked Sangkay Janjan TV. In August, the Facebook page made a false claim that retired army general Jovito Palparan was innocent over the abduction of two missing students of the University of the Philippines. – Pauline Macaraeg/Rappler.com