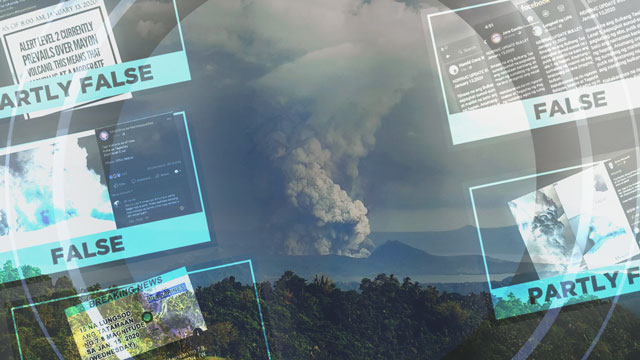 MANILA, Philippines (UPDATED) – Everybody is on full alert after Taal Volcano in Batangas began erupting on Sunday, January 12. (READ: FAST FACTS: What you should know about Taal Volcano)

Amid the panic over evacuation and safety measures, many social media users posted or shared unverified claims about heightened alert levels, false tsunamis, and earthquake warnings, and even images of maps and volcanoes that do not accurately represent Taal Volcano.

While some of these posts may have had good intentions, misinformation brings about more harm than good. Rumors and false information spread widely on social media could threaten safety and induce panic and fear among the public.

Below, we debunked some of the widespread claims that we either spotted or were sent to us by our readers.

Claim: An image of a volcano erupting on Sunday, January 12, is supposedly that of Taal Volcano.

The facts: The photo is not Taal Volcano, it is the Santiaguito lava dome of the Santa Maria Volcano in Guatemala.

The facts: Claims alluding to expected earthquake schedules have been debunked repeatedly by Rappler. The Philippine Institute of Volcanology and Seismology (Phivolcs) has also repeatedly pointed out that there is no available technology that could accurately predict when earthquakes will strike.

Claim: The alert status of Mayon Volcano has “now” been raised to Alert Level 2 following the phreatic or steam-blast eruption of Taal Volcano on Sunday, January 12.

The facts: Mayon Volcano has been on Alert Level 2 since March 29, 2018, and this has remained unchanged, even after Taal spewed ash on Sunday, January 12.

Claim: A number of Facebook posts say that the recent volcanic activity of Mt Shintake in Japan, Popocatepetl volcano in Mexico, and Taal Volcano in the Philippines means that the Pacific Ring of Fire is “active.”

Claim: A chain message circulated through messaging apps claims that ABS-CBN weatherman Kuya Kim Atienza and television network BBC warned the public to turn off their cellphones between 10:30 pm and 3:30 am because those units could emit strong radiation within that span of time due to cosmic rays and “nucli atomic.”

The facts: The chain message is an old, previously-debunked claim. ABS-CBN weatherman Kuya Kim Atienza denied the claim in his tweet dated January 12, 2020.

The facts: NDRRMC did not release this update. As of January 13, 5 pm, Taal Volcano is still on Alert Level 4.

Claim: Facebook page Philippine Weather System/Earthquake Update posted a photo of what looks like volcanic smoke mixed with lightning streaks, and says it is a photo of Taal Volcano.

The facts: The photo was taken in Chile, not in the Philippines, by award-winning Chilean freelance photographer Francisco Negroni. It was a photo of the Calbuco Volcano erupting in southern Chile in April 2015. A reverse image search shows copies of the photo had been available online as early as December 2015.

The facts: The management of SM MOA said the mall’s foundation is not compromised, and that their senior managers have not called for any meetings with their engineers. Local authorities also say there are no reported incidents of visible building damage.

Claim: A message being shared on messaging apps urged people to charge their devices because of a supposed province-wide blackout that hit Laguna.

The facts: While ashfall did affect power supply in Batangas, Cavite, and Laguna, not all areas in these provinces were affected.

Claim: Some photos of rescued pets and animals circulated on Facebook, after Taal Volcano began erupting on January 12.

The facts: All except one of the posted photos of people rescuing animals were taken in Guatemala in 2018, after the eruption of Volcan de Fuego.

Claim: Facebook page Laguna Spotted said Taal Volcano “drew in” water from the seas of Oriental Mindoro after the volcano began erupting on January 12, which could lead to a stronger eruption.

The facts: The Philippine Institute of Volcanology and Seismology (Phivolcs) said it is “almost unlikely” for Taal Volcano to draw in water from the seas of Oriental Mindoro because the two bodies of water are not connected.

Claim: Facebook page Philippine Weather System/Earthquake Update claimed on Monday, January 13, that the supposed unusual low tide in Barangay Lumangbayan in the town of San Teodoro, Oriental Mindoro is a sign of a possible volcanic tsunami.

The facts: According to the Philippine Institute of Volcanology and Seismology (Phivolcs), it is “almost unlikely” for low tide in Oriental Mindoro to be connected to a potential volcanic tsunami that is related to Taal Volcano’s eruption.

13. PARTLY FALSE: ‘Lava will come out of the fissures’ caused by Taal Volcano activity

Claim: A Facebook post by the page “The Watchmen’s Earth and Space connection” says that fissures will open up in Batangas and lava will come out of them.

The facts: Though fissure vents do naturally occur, it is unlikely for lava to come out of the fissures caused by Taal Volcano in the areas encircled on the map in the post, based on the volcano’s historical eruptions.