FALSE: PH economy got worse after Marcos was ousted 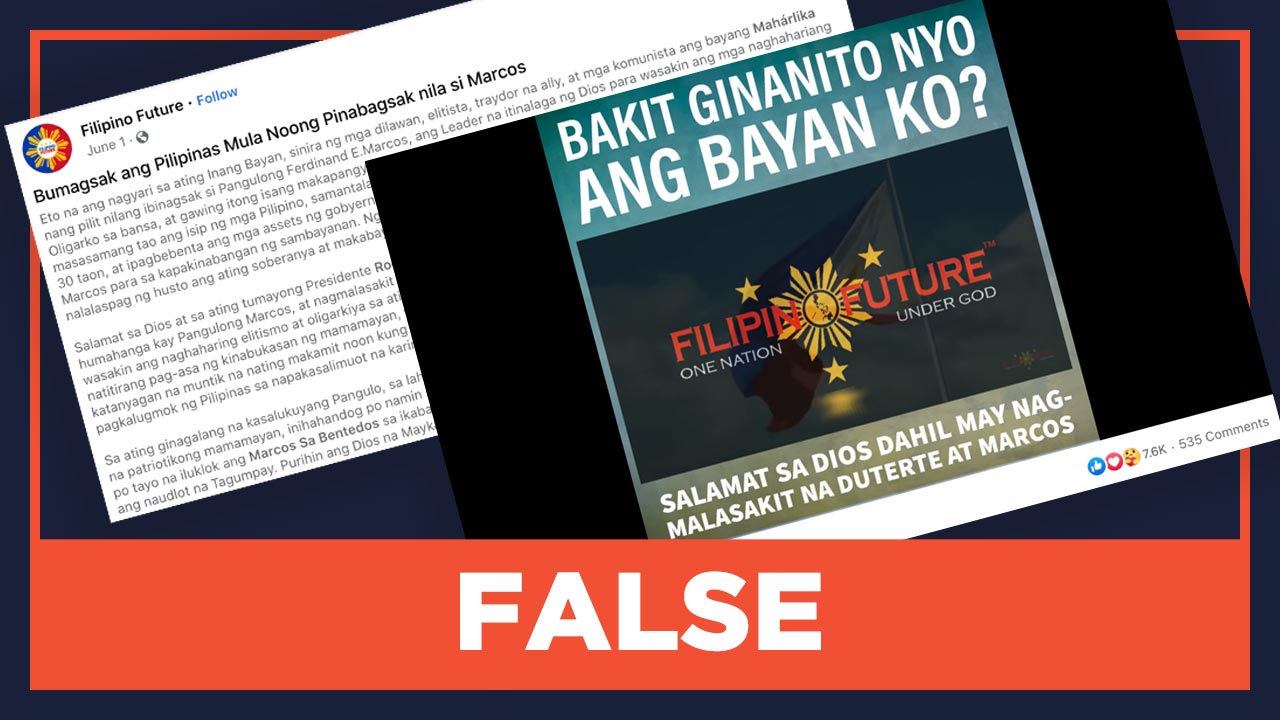 Claim: The Philippines got worse after the late dictator Ferdinand Marcos was overthrown by the EDSA People Power.

Facebook page Filipino Future posted a video on June 1, 2020, titled, “Bumagsak ang Pilipinas Mula Noong Pinabagsak nila si Marcos (The Philippines fell when they ousted Marcos).” The description of the video talked about how the Philippines became the Asian “tiger” economy under Marcos, and how it became worse after he was ousted in 1986.

(This is what happened to our country. Yellows, elitists, traitors, and communists ruined Maharlika when they forced President Ferdinand Marcos out of power, the leader ordained by God to destroy the oligarchy in the country and make it the powerful Tiger of Asia.)

The video mentioned President Rodrigo Duterte too, and how he is following Marcos’ example in abolishing the oligarchy in the country today. It also mentioned Bongbong Marcos, son of the late dictator.

(And this is perhaps God’s will to bring back the people’s hope. No one else but Bongbong Marcos can continue the road to prominence that we almost had before – if not for the EDSA People Power Rebellion, which was the reason for the Philippines’ downfall.)

The video itself was just a montage of photos showing poverty in the Philippines, photos of the Marcos family, and photos of Duterte.

Claim Check, Facebook’s monitoring tool, flagged the video for fact checkers to verify. It was reported at least 11 times on Facebook for containing false information. As of writing, the video had over 90,000 views, 3,700 shares, 7,600 reactions, and 533 comments. It was still being shared as of July 6.

The facts: While it is true that the Philippine economy was on the rise at the start of the Marcos administration, data show that the economy was also already falling during the latter part of Marcos’ dictatorship.

Gross domestic product (GDP) and GDP per capita data, two universal indicators of a nation’s prosperity, show that the Philippine economy was already falling before 1986 – both in annual growth rates and absolute values.

A country’s GDP is the monetary value of all its output of goods and services, which is used to estimate the size of an economy and its growth rate. GDP per capita, meanwhile, is used to measure the average living standards and economic wellbeing of a person in a country. It is calculated by dividing the country’s GDP by its population.

In absolute terms, the country’s GDP and GDP per capita started declining in 1983.

Economists say that the decline in the country’s economy during the latter part of Marcos’ administration caused the Philippines to lose two decades of development. This economic setback also led to the Philippines becoming the “sick man of Asia.” (READ: Marcos years marked ‘golden age’ of PH economy? Look at the data)

A fact check Rappler published last year also debunked a related claim that said nobody was poor during Martial Law and that the real poverty happened during the Aquinos’ terms. Although the earliest poverty statistics from the Philippine Statistics Authority is for the year 1985, a year before Marcos was ousted, it showed that poverty incidence in families that year was already at 44.2% (READ: FALSE: ‘No poor Filipino’ during Martial Law, only during the Aquinos’ terms)