FALSE: Robredo did not bother to visit Typhoon Ulysses victims in Rodriguez, Rizal 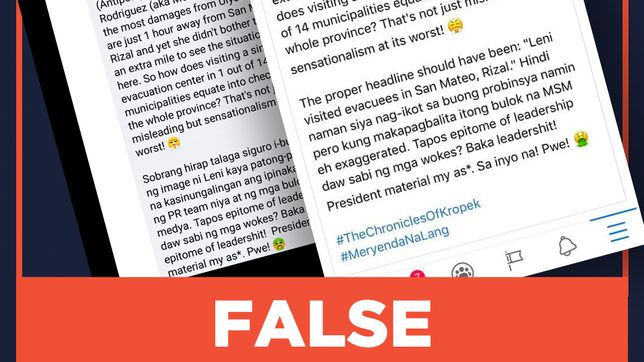 A comment by Facebook user Vivian Mulat falsely claimed that Vice President Leni Robredo did not make an effort to visit the municipality of Rodriguez even though it sustained the most damage from Typhoon Ulysses in the province of Rizal. She instead went to the neighboring town of San Mateo, where she supposedly stayed for less than 30 minutes in one evacuation center.

This is false. Robredo visited Rodriguez on November 12, a day after Ulysses hit land in the country. She had not yet visited San Mateo when the claim first appeared, as confirmed by Robredo’s spokesman Barry Gutierrez in a Viber message. Robredo’s first visit to San Mateo was on November 19.

At around the 6:04 mark, Robredo asks evacuees where they reside. The evacuees then say they are residents of “1K2,” which is also located in Kasiglahan Village.