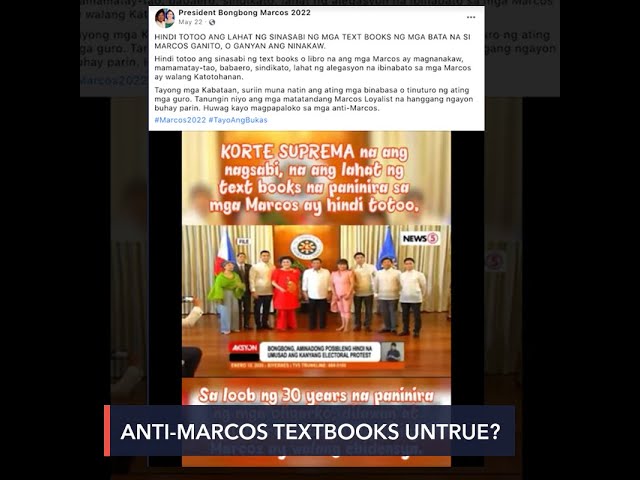 A video posted by Facebook page “President Bongbong Marcos 2022” falsely claimed that the Supreme Court said all textbooks against the disgraced dictator Ferdinand Marcos were untrue.

(No less than the Supreme Court has said that all text books besmirching the name of the Marcoses are untrue. In the 30 years that the oligarchs, the yellow crowd, and anti-Marcos groups defamed the Marcos family, they have not provided any no evidence to their claims.)

The claim was posted on May 22, but is still being circulated as of December. The post was sent to the “Fact-checking in the Philippines” Facebook group for verification. It has gained 12,000 reactions, 1,100 comments, and 8,800 shares as of writing.

The claim is false. The Supreme Court never made such a ruling or pronouncement. No record of such a decision or statement by the Supreme Court can be found on its website.

(He again refuted accusations that they were revising history to clear the name of the Marcoses, whom textbooks often labeled as corrupt and thieves. He said that courts were the ones clearing their name, especially since the Sandiganbayan had been junking forfeiture cases against their family one after another.)

Prior to this, the anti-graft court Sandiganbayan dismissed a P200-billion forfeiture case against the Marcoses due to the violation of the Best Evidence Rule given that documents submitted were “mere photocopies.” This decision does not mean that all corruption allegations against the Marcoses were untrue.

In fact, the Sandiganbayan even said in its decision: “The Court acknowledges the atrocities committed during Martial Law under the Marcos regime and the ‘plunder’ committed on the country’s resources. However, absent sufficient evidence that may lead to the conclusion that the subject properties were indeed ill-gotten wealth by the Marcoses, the Court cannot simply order the return of the same to the national treasury.” (READ: Did Marcoses really win? Sandiganbayan justice chides PCGG in P200-B case)

Rappler earlier debunked another claim that the Marcoses were not convicted of any charges.