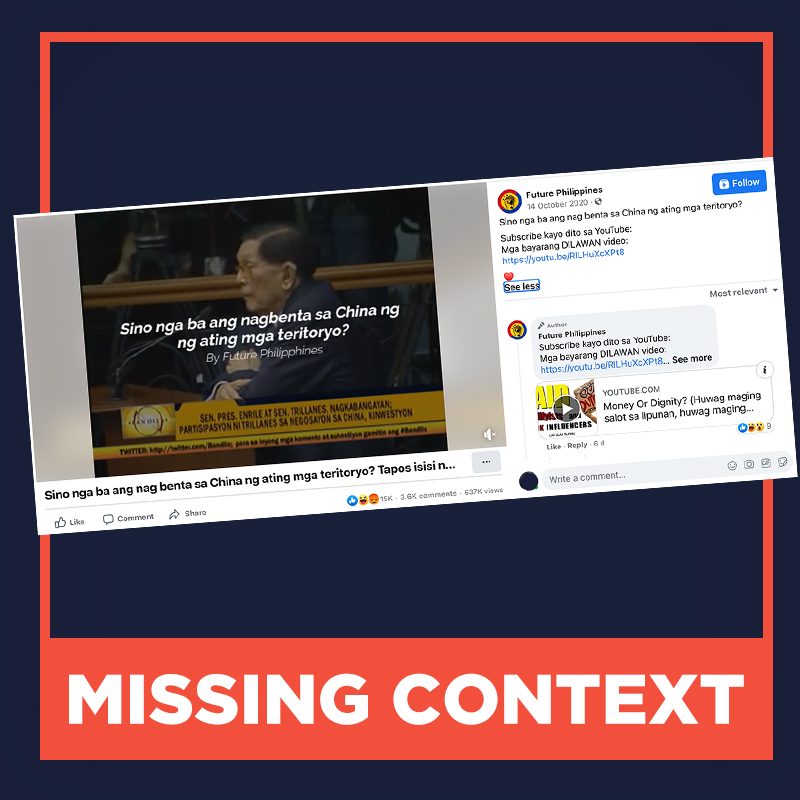 Facebook Twitter Copy URL
Copied
In 2017, the Ombudsman junked a treason and espionage case against former President Aquino and Senator Trillanes on the grounds that no probable cause was established between China’s aggression and their 2012 backchannel discussions

The caption on the video read: “Sino nga ba ang nagbenta sa China ng ating mga teritoryo?” (Who was it that sold our territories to China?)

Although a treason and espionage case was filed against both former president Benigno “Noynoy” Aquino III and Trillanes in 2016, then Ombudsman Conchita Carpio-Morales junked the cases in 2017 on the grounds that China’s “hostilities and aggression” cannot be attributed to the 2012 backchannel discussions.

Trillanes, who was Aquino’s negotiator for Scarborough Shoal in 2012, spoke to Chinese officials over ownership of the shoal. The Ombudsman found no probable cause for treason or espionage in relation to this.

Despite the former Ombudsman’s resolution on Trillanes’ case, Enrile brought up the issue once again during President Rodrigo Duterte’s public address on May 17.

Like in 2012, Enrile asserted that nobody knew the details of Trillanes’ backchannel discussions, and that his connections with Beijing and role in the negotiation ought to be put into question. Trillanes responded that the country’s territorial disputes with China are no longer about Scarborough Shoal, but the Spratly Islands.

The tribunal’s ruling also meant that both small-scale Filipino and Chinese fishermen ought to have “traditional fishing rights” in the shoal, proving that no Philippine territory had ever been “sold” to China. (READ: MISSING CONTEXT: Philippines lost Scarborough shoal)

As of writing, the Philippines has filed three new diplomatic protests against China over a series of unlawful actions taken by Beijing in the West Philippine Sea. – Danna Gonsalves/Rappler.com