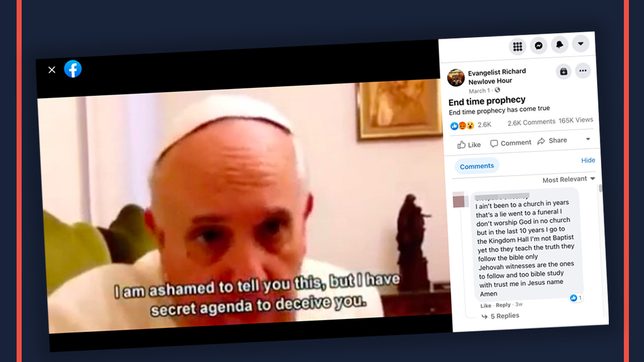 A video with false subtitles uploaded on Facebook shows Pope Francis supposedly discussing the “end time prophecy,” and says people should not look up to him anymore unless they want to be “thrown into the lake of fire.”

The video features Pope Francis speaking in Italian as English subtitles flash at the bottom of the video. The subtitles falsely say that the Pope confessed to having kept a secret for a long time.

The video says: “All that is happening here is very, very prophetic. Tony Palmer…he knows what I am talking about. I found out only recently that the Bible is very accurate regarding this meeting to unite on peace and safety…. But truthfully, it says after that, ‘then Sudden Destruction.’”

The subtitles continue to say: “I am very sad about what is happening, even within my own life. And within our stiff-necked suburbs. So really your family should not follow me or look up to me anymore. Otherwise, you and your family will be mislead (sic) and be thrown into the lake of fire. I am ashamed to tell you this, but I have [a] secret agenda to deceive you.”

A reader emailed the video for verification. Facebook page “Evangelist Richard Newlove Hour” uploaded the video on March 1. As of writing, the video has over 165,000 views, 4,200 shares, 2,600 engagements, and 2,600 comments.

The subtitles in the Facebook video were mistranslated. A reverse image search shows that the original video was recorded in 2014 for an American Pentecostal conference.

In the original video, the Pope was talking about Christian unity and was urging people to love God and others. The Pope also mentioned his friend, Bishop Tony Palmer.

“I am here with my brother, my Bishop brother, Tony Palmer. We’ve been friends for years. He told me about your conference, about your meeting. And it’s my pleasure to greet you. A greeting both joyful and nostalgic [yearning],” the subtitles in the original video said.

Palmer also uploaded a copy of the Pope’s video message, along with his speech, on his YouTube account.

The real subtitles said that the Pope was joyful because people came together at the conference to worship, but also yearning because there are still families that don’t love each other.

At around the mark where the false video showed subtitles that urged people not to follow the Pope anymore, the real subtitles actually said: “We are kind of…permit me to say, separated. Separated because, it’s sin that has separated us, all our sins. The misunderstandings throughout history. It has been a long road of sins that we all shared in. Who is to blame? We all share the blame. We have all sinned. There is only one blameless, the Lord.”

Multiple Catholic organizations and media groups also reported on Pope Francis’ video message in 2014, including the Catholic News Agency, Aleteia, Patheos, and Catholic Philly. None of them quoted the Pope as saying that he had a secret agenda nor said that he talked about the end of time. – Pauline Macaraeg/Rappler.com