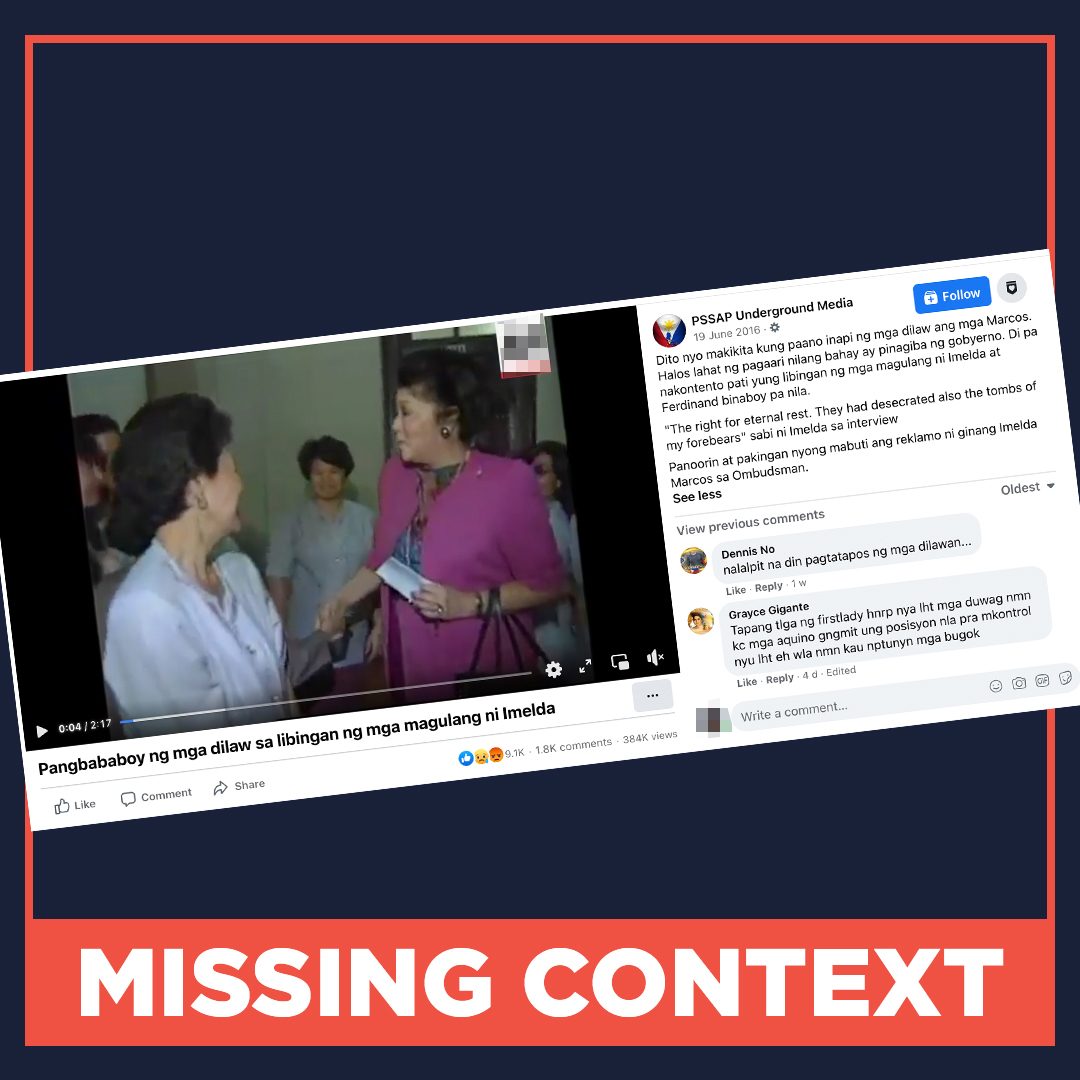 A post on the Facebook page “PSSAP Underground Media” claims that the Marcos family was bullied by the “dilaw” (yellow) – a term used to describe anti-Marcos supporters, the Liberal Party, and the Marcoses’ political rivals, the Aquino family. These people allegedly compelled the government to destroy Marcos properties in Manila and Leyte.

The post includes a two-minute video by the Associated Press, which features former first lady Imelda Marcos pleading for her properties not to be destroyed while touring the remains of a demolished mansion.

At the 1:20 mark, she tearfully tells workers: “Bahay ’to ni Imee. ’Wag niyo sirain!” (This is Imee’s house. Don’t destroy it!). At the 1:52 mark, she says: “They have already destroyed our homes in San Juan, my ancestral home in Leyte. They destroyed all our homes everywhere. Now they are taking our children’s too. Why?”

What is seen in the video clip was a result of the mandate of the Presidential Commission on Good Government to recover the ill-gotten wealth of the dictator and former president Ferdinand Marcos. The house was demolished after it was sequestered by the PCGG, and then sold to a private individual in November 1994 for P215 million pesos or $8.3 million.

The PCGG’s official mandate gives the agency the power to sequester and take over all entities and business enterprises owned or controlled by Marcos’ relatives and associates that have been acquired through the use of an undue advantage provided by their public office, powers, authority, influence, connections, and relationships.

While the PCGG was created by former President Corazon Aquino in 1986, this particular sequestration took place in 1994 during the administration of president Fidel Ramos. The PCGG was under the leadership of chairperson Magtanggol Gunigundo at the time.

The clip on Facebook originates from an AP video for a story they covered in 1996. Back then, Imelda Marcos was filing a criminal complaint against the PCGG for selling her family’s properties, claiming that it had no right to do so. The former first lady also directed this complaint towards Manuel Malvar, the lawyer who bought the property, and finance undersecretary Romeo Bernardo, who helped approve the sale.

The complaint, however, was dismissed by ombudsman Aniano Desierto in 1998 on the grounds that the PCGG reserved the right to sell Marcos properties, according to its mandate.

The agency has so far managed to recover P174 billion pesos worth of assets, with an additional P125.98 billion still under litigation. (READ: Breakdown: P174B recovered from Marcos loot, P125B more to get)

Recent and rehashed versions of this claim can still be found circulating on various social media sites, including TikTok. There, a similar video has so far gained over 153,500 likes, 9,851 comments, and 5,327 saves and shares. Other fact-checking sites have spotted similar claims gaining traction once again and have tagged it as misleading. – Danna Gonsalves/Rappler.com