MANILA, Philippines – Jason* couldn’t forget how his high school teacher made him feel uncomfortable every time he would attend his MAPEH (Music, Arts, Physical Education, and Health) class at the Bacoor National High School (BNHS) in Cavite. He knew something wrong was happening. He felt abused. But he kept silent because, according to him, he felt powerless that time.

Though the alleged sexual abuse happened in 2018, Jason could still vividly remember those instances. He recounted these experiences in a Zoom interview with Rappler on Wednesday, August 31. He was among those who came forward recently – alleged victims of sexual abuse by teachers in BNHS.

Jason said that during one of their classes, the teacher asked many of them (all boys) to watch sex videos. They knew that time that it was inappropriate for a teacher to do that but they felt helpless. 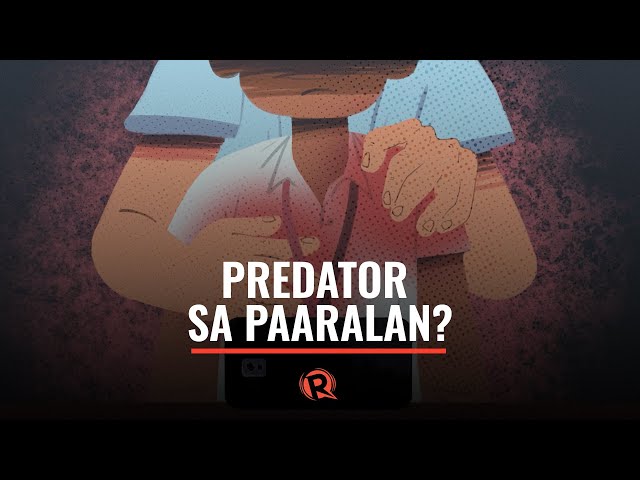 The same teacher also did unwelcome touching on Jason and his other male classmates. But that time, he was confused if it was tantamount to sexual abuse since it was not his private body parts the teacher was touching. One thing he was sure of was – it made him uncomfortable.

“Tinotouch niya po ‘yung mga braso ko tapos dibdib – I mean ano po, parang subtle. Kunwari nilapit niya sa ’kin ganyan, itotouch niya tapos it went on,” Jason said. (He was touching my arms then my chest area. It was subtle. At first, he was just trying to reach me, then he would touch me, and it went on.)

This was also the experience of Mark* with the same teacher. He said that the alleged abusive teacher called him, along with his other male classmates, including Jason, “baby.”

In an interview with Rappler on Thursday, September 2, Center for the Prevention and Treatment of Child Sexual Abuse (CPTCSA) executive director Zeny Rosales said that it is important to put into context what sexual abuse is and what constitutes such.

Rosales said that the misconception that girls are more prone to sexual abuses because they are girls are making things worse. This discourages boy victims from coming forward whenever they experience such.

“We’re very much focused on only protecting girls. But boys can be victims, too. This is sad. This is why boys are becoming unprotected from sexual violence and exploitation,” she added in Filipino.

Jason and Mark said that at first they couldn’t tell if they were being sexually exploited by their teacher. They knew what their teacher was doing wrong, but in their school, it seemed to be normalized.

“Tapos hindi po siya nahihiya sa mga estudyante. Tapos ako po, kahit medyo kulang pa ‘yung muwang ko medyo nahihiya nga po tapos parang may…. naisip ko na may mali na ‘ata ‘to ganyan, ganyan,” Jason said. (He was not ashamed of what he was doing. Even though I had limited knowledge, I felt ashamed because I knew something was wrong.)

According to Rosales, sexual abuse happens when an individual feels uncomfortable in a situation when the abuser does something to him, whether or not directly touching private parts.

(If someone asks you to perform sexual activities or behavior without your consent, that’s physical sexual abuse. It’s emotional sexual abuse when you feel confusion or discomfort over the sexual language used by the one you’re talking to.)

CPTCSA posted on its website four rules on touching.

Jason and Mark were not alone. In a Twitter thread on August 28, Miguel Damasco, an alumnus of BNHS, shared the alleged sex abuse experiences of some students with at least four teachers identified in the thread. The thread was originally posted on Facebook but got deleted for supposedly violating community standards.

In a text message to Rappler on Sunday, September 4, Damasco said that over 20 students have come forward with their experiences of alleged sexual abuses made by teachers of BNHS.

The Department of Education (DepEd) said it was investigating the alleged sexual abuses in BNHS. DepEd spokesman Michael Poa said on Thursday, September 1, that they were investigating seven teachers. The teachers were not given teaching loads and have been placed on floating status.

Poa also urged the victims to come forward and file affidavits of complaint. “Although our investigation is ongoing, the problem is we don’t have enough affidavits from complainants so we’re asking your help in encouraging the alleged victims to file their affidavits so we would have enough evidence for the cases, if any,” he said.

In a separate statement, BNHS school principal Teddy Gloriani said that the school was already probing into the incidents, confirming that the teachers were not given teaching loads.

“The school immediately made an action regarding the issues of teachers about the alleged sex abuse posted by a netizen,” Gloriani said in a text message to Rappler on Monday, August 29.

A quick check on Facebook showed that the accounts of four identified teachers in the viral Twitter thread have been deactivated.

Advocacy group CAMELEON said that about 7,000,000 children are sexually abused every year in the Philippines.

“More than 70% of sexually abused children are between 10 and 18 years old. Among those victims, 20% are under 6 years old,” the group said in its website.

Citing the Department of Social Welfare and Development (DSWD), CAMELEON said that cases of child sexual abuse are one of the most common issues that the agency has to handle after abandonment and neglect.

“Despite the Anti-Rape Law of 1997, rape remains the most frequent type of sexual abuse, followed by incest and fondling. 98% of rape victims are women. The incest percentage is another alarming data: 33%,” they said.

CAMELEON is an international solidarity association founded in 1997. According to its website, the organization “develops a holistic approach to act on the causes and effects of sexual violence towards children and teenagers.”

Hontiveros said that under the Safe Spaces Act, which she authored, all schools should publish grievance procedures and must assign an officer-in-charge who can receive complaints.

“Do our schools follow the law? Sexual harassment cases brought up to educational institutions’ notice must be resolved in a transparent, pro-active, and timely manner in order to ensure the swift delivery of justice,” she said.

“It seems that social media has become the students’ last resort to report such incidents because they are not being heard by their schools,” she added.

Recently, the Philippine High School for the Arts (PHSA) also made headlines after reports of emotional, verbal, and sexual abuse in the school. This prompted Vice President and Education Secretary Sara Duterte to tap the National Bureau of Investigation to conduct a probe into the issue.

The DepEd encourages concerned members of the community to submit complaints to the child protection committees in schools.

Rappler asked the DepEd how many complaints of sexual abuses they have received since 2020, when child protection units in schools were instituted, but they have yet to reply as of posting. – with reports from Ashley dela Vega and Almira Coleen/Rappler.com