Can Calida receive millions in allowances? 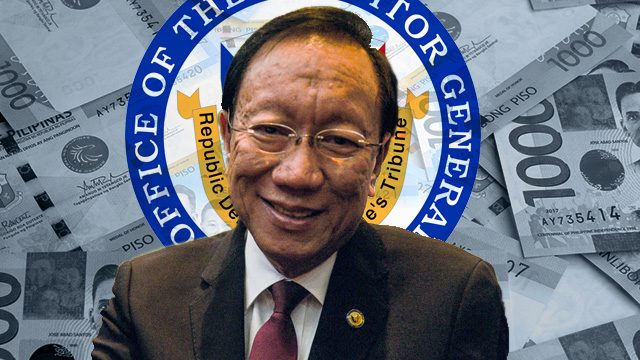 Facebook Twitter Copy URL
Copied
The Commission on Audit has been flagging this issue for years, but pending disputes leave the status quo – which has allowed Solicitor General Jose Calida to earn P27.9 million in allowances in the last 3 years – unchanged

Solicitor General Jose Calida has earned a cumulative P27.9 million in allowances and honoraria alone in the last 3 years, reopening a recurring issue of excessive allowances given not just to officials of the Office of the Solicitor General (OSG) but government lawyers too.

At the center of the issue is the insistence of the Commission on Audit (COA) that government lawyers should not receive allowances more than 50% of their basic salary.

Calida has disputed this, allowing him to get P11.9 million in allowances and honoraria in 2019. This is more than quadruple his P2.9-million basic salary that same year.

Calida’s millions in allowances and honoraria propelled him to the Top 5 of the highest-paid government officials in the last 3 years – Top 2 for 2019 – which is a rare feat for solicitors general.

No solicitor general has entered the Top 10 of highest paid government officials since 2009, according to the earliest Report on Salaries and Allowances (ROSA) uploaded on COA’s public database.

“It’s an old, recurring issue between OSG and COA,” said former solicitor general Florin Hilbay in 2017 when his own allowances during his 2016 term were flagged as excessive by COA.

Hilbay and former solicitor Francis Jardeleza had also received in the past millions in allowances that exceeded 50% of their basic salary, but not big enough to push them to the Top 10 of the highest paid.

The 2nd highest paid OSG official after Calida is Assistant Solicitor General Renan Ramos who is No. 96 in the 2019 top paid list with an annual earning of P5.7 million. Ramos earned P2.5 million in Personal Economic Relief Allowance (PERA), Additional Compensation (AdCom) and honoraria – or the controversial allowances – still more than 50% his basic salary of P2 million.

The OSG’s defense is its own law, or Republic Act 9417, specifically Section 8, which says “the legal staff of the Office of the Solicitor General are allowed to receive honoraria and allowances from client departments, agencies, and instrumentalities of the Government.”

The text does not set a limit.

COA Circular No. 85-25-E states that allowances should not exceed 50% of the annual salary.

“The OSG is steadfast in its position that a COA administrative circular cannot abrogate a substantive law such as the OSG Charter,” the OSG said a statement in 2017.

Calida’s spokesperson Hector Calilung has not responded yet to Rappler’s text messages, viber messages, email and call made since Thursday requesting for a comment on this story. We will be updating this story once we hear from them.

The allowances come from the government agency clients of the OSG, which serves as the statutory counsel of the state. COA has not released its 2019 audit report on the OSG yet, which could provide details on which agencies paid Calida his P11.9 million allowances and honoraria for that year.

The function of the Office of the Government Corporate Counsel (OGCC) is similar in nature, except that the OGCC’s clients are limited to government-owned and controlled corporation (GOCCs).

Part of the functions of OSG and OGCC as lawyers is rendering legal opinions to government agencies – crucial because they provide legal support to projects and transactions funded by the people’s taxes.

For example, the OSG rendered a legal opinion saying that foreign-based Philippine Offshore Gaming Operators (POGOs) can’t be taxed. This even raised a question about why it was the OSG that issued a legal opinion to the Philippine Amusement and Gaming Corporation (Pagcor).

Justice Secretary Menardo Guevarra told Rappler in an earlier message that “under the administrative code, it is the Department of Justice, as the principal law agency of the government and as the office of the attorney general, that is empowered and authorized to render legal opinions to the government.”

This power to render legal opinions is what makes allowances tricky, according to Jurado, who said that client agencies should not be allowed to give allowances to their government lawyers.

“If you are a lawyer and you are receiving this much from this corporation, ang magiging resulta ng paghawak ng kaso mo diyan is always in favor of your client, particularly ‘yung legal opinion and contract review,” said Jurado.

(If you are a lawyer and you are receiving this much from this corporation, the result of your handling of that case will always be in favor of the client, particularly the legal opinion and contract review.)

“It’s like this. I’m receiving P25,000 sa opisinang to. Eh nagpapa-contract review, shall I make a negative review or favorable review? Ma-ko-comrpomise ka na kasi tumatanggap ka na ng allowances sa kanila eh. That is one reason why I refused to accept any allowances, because I will be compromised,” added Jurado.

(It’s like this, I’m receiving P25,000 from this office, and then you ask for a contract review, shall I make a negative review or a favorable review? You will be compromised because you received allowances from them.)

Jurado said during his time in the OGCC, or before he was fired in 2018, he refused allowances from client agencies because of this principle and because he wanted to follow COA.

In 2017, Jurado received only P16,454 in Personnel Economic Relief Allowance (PERA), Additional Compensation and Honorarium. He received P10,000 for the same in 2018.

Another issue is the practice of client agencies giving allowances direct to the lawyers and not through their Financial Management Service (FMS).

Because of this, COA said there “is no assurance that the correct taxes were indeed withheld or no taxes were withheld at all.”

For 2017, Calida received P1.524 million worth of allowances directly, leading COA to say that benefits deposited directly “were not properly monitored for taxation purposes.”

In 2017, the OGCC was also flagged for excessive allowances and directly paid allowances, which included those of then-deputy government corporate counsel Elpidio Vega, now the OGCC chief.

COA said Vega received P641,000 directly from client agencies and may have evaded tax monitoring. In total, COA said Vega’s allowances in 2017 were P300,982 in excess of what he was allowed to receive.

But the next year, in 2018, the OGCC heeded COA and refunded these excesses, according to the 2018 audit report of the OGCC. COA said the recommendations were “fully implemented.”

This didn’t happen in OSG.

The recommendations to refund the excesses in 2017, to limit future allowances to 50% of basic salary, and to order their FMS to process claims of allowances not more than 50% of the basic salary were all “not implemented,” according to the OSG’s audit report for 2018.

The OSG’s defiance may be stemming from confidence that they have legal basis, said Jurado.

(The OSG has a different charter. In as far as OSG is concerned, apparently they are entitled. So maybe they are correct in saying that they are really entitled, but of course there is a COA circular.)

The OGCC law does not have its own special clause like OSG does with RA 9417. The OGCC has had to use laws pertaining to the Department of Justice (DOJ) to try and justify their allowances.

During his time, Jurado tried to correct this practice and instructed lawyers of the OGCC to comply with COA’s 50% rule, and to refrain from receiving direct allowances. It caused a stir within the OGCC in May 2018. By end of that month, President Rodrigo Duterte fired Jurado, and eventually appointed Vega.

For 2019, Vega received P6.4 million in PERA, Additional Compensation and Honoraria, which was more than 3 times his basic salary of P2.1 million that year. Vega is now the 24th highest paid government official, according to the 2019 Report on Salaries and Allowances.

Before he was fired, Jurado elevated this issue to Justice Secretary Guevarra. The OGCC and OSG are agencies both attached to the Department of Justice (DOJ).

Jurado said he never got a response from Guevarra.

Notices of disallowance issued to Calida and others are pending before COA.

In the earlier version of a Senate bill that sought to strengthen the OSG, Section 18 of SB No. 1626 would have spelled out that “the total of said honoraria and allowances shall not exceed 50% of the basic salary of solicitors.”

This clause was removed in the later versions of the bill, which was eventually vetoed by President Rodrigo Duterte.

“‘Yung OSG bill nga di ba nilagay nila roon eh. In effect inamin nila na we are entitled only to 50%. But the bill itself was vetoed by the President. Dapat ‘yan ang Supreme Court or COA once and for all, tapusin,” said Jurado.

(They put that in the OSG bill, so in effect they conceded that we are entitled to only 50%. But the bill itself was vetoed by the President. It should be the Supreme Court or COA who should resolve this once and for all.) – Rappler.com