Doctors plead with gov’t: ‘We can’t fight this virus with antiquated methods’ Facebook Twitter Copy URL
Copied
PART 2: Health workers propose a command center that can dispatch ambulances, refer patients to the right hospitals or quarantine facilities, and monitor those getting treatment at home – in coordination with local governments

After weeks of drastic increases in coronavirus cases, health workers in Philippine hospitals look to the coming months with worry. There will be a “vicious cycle” of  surge upon surge if changes are not done with the Duterte government’s pandemic response.

The current situation could have been avoided. In early March, medical workers were already calling on the government to act quickly on the rapid increase in infections. They were the same health professionals who called for a two-week return to a strict lockdown from July to August 2020, the last time the Philippines saw a deadly spike in cases.

At the time, the Health Professionals Alliance Against COVID-19 (HPAAC) called for improving ventilation in workplaces, coordinating contact tracing across local government units (LGUs), and accelerating pop-up bike lanes to offer safer transport options. They stressed that a time span of just days would be crucial so the country could avoid a deadly increase in cases. Only a few of those quick actions they asked for were taken.

Infections has since quickly outpaced government efforts. An initial “stricter” general community quarantine was enforced within a bubble encompassing Metro Manila and the provinces of Bulacan, Rizal, Laguna, and Cavite, while health officials mostly only reminded the public to take “extreme caution” and practice health protocols.

“We reemphasize that this mobility restriction is but a short-term intervention, and yet it seems to have been wasted again. The government still has no clear plans and efforts to fix the root causes, and the nation continues to suffer because of this,” HPAAC said.

Now, health experts are once again pleading with the Duterte government to consider its demands to improve patients’ access to care. Hospitals remain packed, they said. Hundreds, if not thousands, of sick patients were still suffering waiting in line for treatment.

Epidemiologist and internal medicine specialist Dr Antonio Dans said much of the focus of the Department of Health (DOH) and the government’s other pandemic officials was to “strengthen” the capacity of the health system to treat COVID-19 patients – mostly by adding more beds, putting up makeshift hospitals, and hiring or reassigning health workers to high-risk areas.

Health Undersecretary Maria Rosario Vergeire said on Monday, April 12, that the government had been able to improve the health system’s capacity  after some 2,200 ward beds, 700 isolation beds, and about 164 intensive care unit (ICU) beds were added to several hospitals during the two-week lockdown.

Vergeire said the DOH also contracted hotels to house health workers who had mild or asymptomatic COVID-19, and reopened mega quarantine facilities for patients with mild cases of the disease.

From the Visayas and Mindanao, 136 doctors and nurses were redeployed to support the operations in 7 DOH hospitals, 2 specialty hospitals, and 1 regional hospital in Metro Manila.

These measures have not been enough to address the problem of patients who can’t get admitted to hospitals, Dans said. Neither would they save hospitals and health workers should another surge overwhelm the country in the coming months.

“The problem is we’re focused on adding resources – in our meetings [with the DOH], that is the focus of improvements. But, in our view, that will take a while, a long time to complete. What do we do with our patients who are suffering now and need help now?” Dans, speaking in Filipino, said in a recent forum. 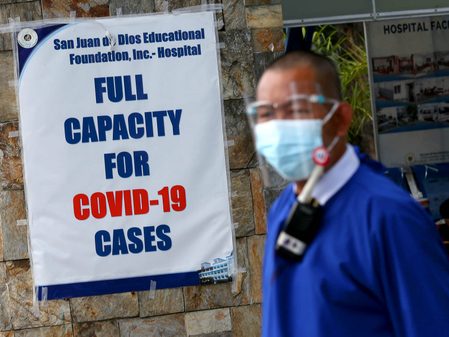 Dans, a key expert behind the Philippines’ Universal Health Care Law, stressed that efforts should also be made towards improving the coordination between hospitals, barangay health centers, local governments units (LGUs), and the One Hospital Command of the DOH. These entities are currently disconnected from one another, forcing patients to navigate overloaded health systems on their own, calling busy government hotlines or hospital telephones both in Metro Manila and provinces hours away.

“We think the way to help people now is by improving the efficiency of the current health system we have and improving on the ways people are given care,” he added.

What HPAAC has proposed the government to consider is an “incident management team for command and control” of the entire capital region, the coronavirus epicenter in the Philippines.

Learning from past disasters

Public health and family medicine specialist Dr Aileen Espina likened it to disaster response measures the Philippines has long been familiar with, having been battered by some of the world’s strongest typhoons.

Espina was the head of the Eastern Visayas Regional Medical Center when Super Typhoon Yolanda (Haiyan), one of the world’s strongest typhoons, ripped into Leyte province in 2013. To her, the coronavirus pandemic is like being in a perpetual category 5 hurricane, she said.

“I can’t help but see the same weakness in our systems now are the very same things I saw during the time of Yolanda. And I can’t help but speak up because, for me, it is enough that the Philippines had gone through a Typhoon Yolanda-like [tragedy],” Espina said in Filipino.

To address the current wave of patients unable to get care, Espina said HPAAC was advocating for the establishment of an incident command center that could coordinate with LGUs and assist local officials in managing the overflow of patients in health centers.

Ideally, this would be the “One COVID referral network” the group urged the government to set up last August 2020. The proposed referral network would be an expansion of the existing One Hospital Command Center (OHCC) to include local governments which held the resources for quarantine centers, ambulances, barangay health centers, and hospitals in their areas, Espina said.

“There is inefficiency in allocating patients to the appropriate facility because there is no unity of command and effort between LGU-led and DOH-guided responses,” HPAAC said.

As it stands, the One Hospital Command Center mostly handled transfers of patients between hospitals, or sought available beds for the thousands who called their hotlines in hopes of finding a hospital that could admit them. But lawmakers, as well as families, who tried calling the center’s two cell phone lines and landlines said phones were often too busy to get through and that hospitals were still limited or unable to take patients.

In a press briefing on April 7, DOH’s Vergeire admitted that the health care utilization rate being released by the DOH was not reflective of the current situation of the health systems in the country.

Vergeire clarified to reporters that what’s currently full are level 3 hospitals that cater to COVID-19 patients.

“Most of them [are] almost full or at that critical risk. But there are still beds available in low level facilities, just like the level 1 hospitals. Our level 1 hospitals comprise 60% of all hospitals in the country. This means that if we report a 67% healthcare utilization rate for NCR, we know that’s not the real picture because we know that our hospitals are full,” she said in a mix of English and Filipino.

Pressed why the DOH does not include only those hospitals capable of treating coronavirus patients, Vergeire did not give a direct answer. “That would be the ideal, but right now even level 1 and level 2 hospitals are handling COVID-19 cases,” she said.

Relatives of COVID-19 patients have turned to social media to seek help in finding available hospitals for admission, with some of them narrating how their loved ones died without proper treatment as there was no space left in hospitals.

“When we saw these kinds of differences, we’re now using the ICU utilization as our indicator because we know that this is the most sensitive indicator we can use for now to guide our decisions,” she said.

Local health officials pay close attention to ICU capacity as it indicates if many are experiencing severe COVID-19. It also measures the health system’s capacity to manage critically ill patients and prevent deaths.

Espina said this was precisely among the gaps seen in the DOH’s One Hospital Command Center – it had no real-time visual of hospital resources or the kinds of patients it was handling. It also lacked actual assets like ambulances or dedicated beds it could provide patients, and no communication system in place with local governments.

A “One COVID referral network” that could serve as an “incident management team for command and control” of patient care in Metro Manila would need to have the following:

The data on this dashboard should include the following:

HPAAC said the OHCC would also need its own resources should it expand into a referral network that could manage patients across the entire metro:

A proposed COVID referral network would also need a communication line to connect with LGUs. HPAAC said the Metropolitan Manila Development Authority could step in here to coordinate between local government units, DOH hospitals, and other government-owned and controlled hospitals.

But how doable are the group’s proposals?

At least on the part of local government, Espina pointed out LGUs were already familiar with the network of health centers in their communities. They already have resources like ambulances.

Charged with implementing government policies and helping their residents cope during the health crisis, LGUs would not be starting from scratch as they were trained in disaster risk management and have had to find ways to support constituents over the past year, Espina said.

A “One COVID referral network” could bridge and coordinate the efforts of local governments in Metro Manila to manage patients, beyond efforts to align curfews or other quarantine policies.

“Let’s not waste what we learned from the time of Yolanda. We need to use those lessons during this time of pandemic,” said Espina, who is also a local health systems development consultant.

In obtaining access to data needed to put up a COVID referral network, HPAAC urged Congress to pass a law that would make the sharing of data on the health system’s capacity mandatory.

The proposed measure would require data from local governments and the private sector to be placed in a central data warehouse, with provisions detailing who would be responsible for protecting data and when it would be disposed of.

“We have been pushing for this for the past year…. We cannot fight this virus that is moving at an exponential rate using antiquated manual methods,” Espina said in an interview on ANC.

With hospitals still under strain from the increase in COVID-19 patients, Vergeire said the DOH is looking to set up a “triage system” across local government units to manage the flow of patients needing health care.

Vergeire said the LGU triage system will serve as a “midway point” where local health officials will assess whether patients in need of care can be brought to local quarantine facilities or if they are already in need of hospital care.

These centers will also have ambulance services ready to transport patients from the LGU triage areas to either quarantine facilities or hospitals, depending on the assessment.

After introducing the proposed new set up on April 5, Vergeire said the government targeted to have the system up and running within the “next few days.” As of April 17, it has yet to be operational. – Rappler.com