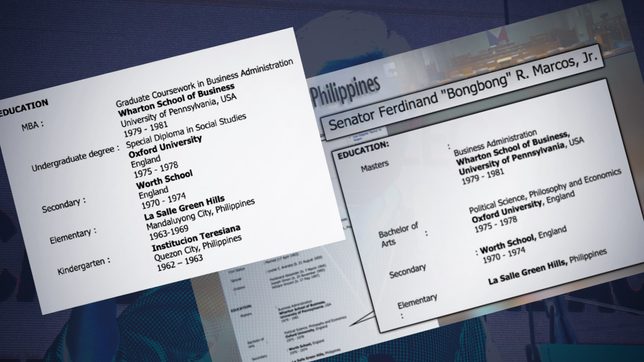 Facebook Twitter Copy URL
Copied
An archived page from his Senate profile in 2015, and an interview in 2016, would show he claimed he obtained a Bachelor's Degree

The camp of presidential aspirant Bongbong Marcos said in a statement on Saturday, October 23, that he “has always been forthright” about his diploma from the Oxford University in the United Kingdom (UK).

“Presidential aspirant Bongbong Marcos has always been forthright on his conferment of a special diploma in social studies by the distinguish [sic] university and has never misrepresented his Oxford education,” Marcos’ spokesperson Vic Rodriguez said in a statement sent to media on Saturday.

Rappler archived his profile on the Senate website in 2015 and that time, Marcos claimed he had a “Bachelor of Arts (BA) degree in Political Science, Philosophy and Economics.” This was for a two-part invesigative series that resulted in a confirmation that what Marcos obtained was not a degree, but a special diploma in social studies.

Since those stories were published in February and March 2015, Marcos’ profile on the Senate website now correctly says that he obtained a special diploma in social studies. But a separate entry of a profile still wrongly says that Marcos “earned his bachelor’s degree in Political Science, Philosophy and Economics from the Oxford University in 1978.”

In an interview on DZMM in January 2016, Marcos was asked again about the issue and he explained he already got certification from Oxford.

“This is to certify that Ferdinand Marcos has completed a BA degree in social sciences,” Marcos said.

Anchor Karen Davila clarified, “Is it a BA degree?”

(I changed courses because it’s philosophy, politics, and economics when it will just end up in politics. I said just make it political science, but they said if that is so, just shift courses.)

Davila asked, “Is special diploma and a degree the same?”

“I suppose there are differences but ang ending nun (in the end) is that it’s a bachelor’s degree,” said Marcos.

The Oxford Philippines Society, an accredited group of Filipinos who are studying or studied in Oxford, said the two are not the same.

“We stand by the Degree confirmation which was issued by the University of Oxford. It is up to anyone to question or challenge this with the said university if they so please,” said Rodriguez, showing a certificate from Oxford dated March 31, 2015.

The certificate, with the header “degree confirmation,” said Marcos got a special diploma in social studies after studying there from 1975 to 1978.

Rodriguez has not responded to Rappler’s question whether the initial claims of a BA degree in 2015 up to 2016 were not misrepresentations.