How will Robredo treat Duterte if he becomes her VP in 2022? 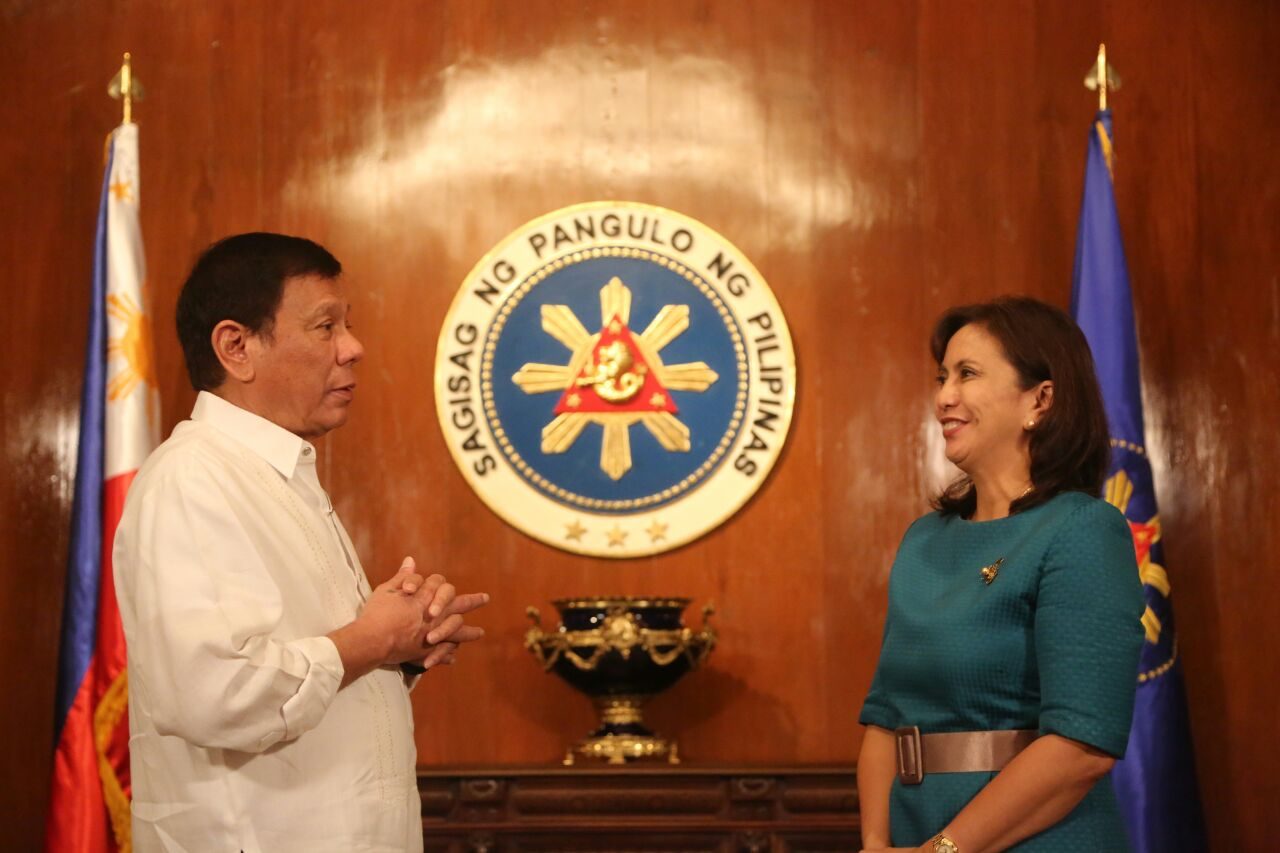 Facebook Twitter Copy URL
Copied
Vice President Leni Robredo hasn’t decided on a presidential bid, but obliges an interviewer on what one may expect if she swaps roles with President Duterte in 2022

Since President Rodrigo Duterte has expressed interest in seeking the vice presidency and Vice President Leni Robredo remains a presidential contender until she officially shuts the door to that possibility, not a few have wondered what it would be like if they swapped roles following the 2022 elections.

Christian Esguerra asked Robredo about the possible scenario in ANC’s After the Fact on Tuesday night, July 20, and if she would treat Duterte the same way he had treated her. She responded, “Parang poetic justice ‘pag nangyari.” (It would be poetic justice if that happened.)

The Vice President, however, stayed true to herself even in a hypothetical situation, quickly adding: “Pero para sa akin, very, very seriously, I will not treat him the way he treated me. Kasi I don’t think it’s in the best interest of the people na iyong presidente saka vice president nag-aaway.”

(But for me, very, very seriously, I will not treat him the way he treated me. Because I don’t think it’s in the best interest of the people if the president and vice president are fighting.)

Robredo once served in Duterte’s Cabinet as housing czar, but she resigned in December 2016 after the President stopped inviting her to Cabinet meetings.

In late 2019, a spiteful Duterte offered Robredo to become co-chair of the Inter-Agency Committee on Anti-Illegal Drugs after she said his vaunted drug war had to be “tweaked” because it was “not working.” The Vice President surprised her allies and critics alike when she accepted the designation.

But Duterte fired Robredo from the post just 18 days after she accepted the job, saying he could not trust her.

Responding to questions in the ANC interview, Robredo said that if Duterte becomes her vice president in 2022, she would still offer him a Cabinet post – as long as he would be committed to do the job.

Robredo, the leader of the opposition, is carefully discerning if she should run for president. Duterte, meanwhile, is floating a potential vice presidential bid, a move described by political analysts as a “bastardization” of the electoral process.

The Vice President, a human rights lawyer, has long been critical of Duterte’s abusive policies – from the senseless killings in his bloody war on drugs to his “shameful sellout” to China.

In turn, Robredo has been on the receiving end of the most vicious and sexist attacks by Duterte himself, his propagandists, and his supporters over the past five years.

‘No single family has monopoly of good intentions’

In the same interview, Robredo did not directly respond to questions on what she thought about a potential Duterte-Duterte tandem in 2022, but maintained her position against political dynasties in the Philippines.

Asked if the floated Duterte-Duterte tandem in 2022 is a shameless move, the Vice President reiterated her longtime position against political dynasties in the Philippines.

When she was still Camarines Sur congresswoman, Robredo co-authored the anti-dynasty bill, which would have become the enabling law for the constitutional provision against political dynasties in the country.

“Kanya-kanya ‘yan. As you have said earlier, they have done that already in Davao. Ako, alam mo naman where I stand even when I was in Congress,” said the Vice President.

(To each his own. As you have said earlier, they have done that already in Davao. You know where I stand on this issue even when I was in Congress.)

The Vice President has not yet decided on whether to run for president in 2022, given her low survey numbers so far and the persistent attacks from the Duterte machinery these past five years.

Rappler sources privy to Robredo’s discernment process say she wants at least a fighting chance before gunning for the presidency in 2022. Her other options include possibly running for governor in her home province or taking a break from politics in 2022. – Rappler.com