PINK MASKS. New lawyers wore pink masks during the oath-taking at the MOA arena on Monday, May 2.

Whenever the Supreme Court livestream camera panned to the new lawyers at the Mall of Asia arena during their oath taking Monday, May 2, you would see many pink masks.

For many, this was a deliberate show of support for opposition presidential candidate Vice President Leni Robredo. This was talked about in group chats prior to Monday’s ceremonies where the bar passers were “encouraged” by their peers to wear pink masks for Robredo “only if you’re comfortable and if you’re pro-Leni.”

It follows the trend of universities calling on their students to wear pink during basketball games.

This is not the first time new lawyers made a statement during oath taking wearing an item of clothing. In 2018, new lawyers tied purple ribbons to their fingers to protest the contentious ousting of former chief justice Maria Lourdes Sereno via quo warranto. They did so even with warning to hold in contempt those who will “disturb decorum.”

The bar passers from the progressive peoples’ lawyers groups wore masks with “justice” written on them. “The mask pays tribute and calls for justice for those fallen colleagues in the legal profession particularly NUPL members,” said the National Union of Peoples’ Lawyers (NUPL).

While waiting, there were Martial Law songs that played, for example “Balita” created by the band Asin to expose atrocities through music during the repressive military rule of the late dictator Ferdinand Marcos, father of Ferdinand Jr, the current survey frontrunner to be president.

There were other songs that played too, like Kelly Clarkson and Taylor Swift, and several version of Umagang Kay Ganda which was a Filipino anthem now used by Marcos as a campaign song.

But the Martial Law songs rang loud, like Asin’s Himig ng Pag-Ibig, and other progressive songs recently heard in the musical Lean, or the retelling of the life of Lean Alejandro, a leading activist during the dictatorship shot and killed in 1987 during the first few months of Corazon Aquino’s presidency.

During the actual ceremony, which is a special en banc session of the Supreme Court, the St. Louis University Glee Club (of Baguio City) sang “Tatsulok” after the lawyers took their oath.

Tatsulok is a song about inequality, and was often used as a rally song to protest President Rodrigo Duterte’s drug war because of the lines “Totoy makinig ka, huwag kang magpagabi, baka mapagkamalan ka’t humandusay diyan sa tabi.” (Young man, listen up, don’t stay out too late, you might be mistaken and drop dead on the side.)

(Up to now, our society is a triangle. The masses are at the bottom. There we will see those who are starved, left homeless, taken advantage of, and oppressed by the system.)

(More than anyone, they are who we refer to when we say the phrase serve the people)

“The impossible only seems so until someone shows that it is possible. Tumaya kayo sa kinabukasan ng nakakarami (Bet on the future of others),” said Leonen. 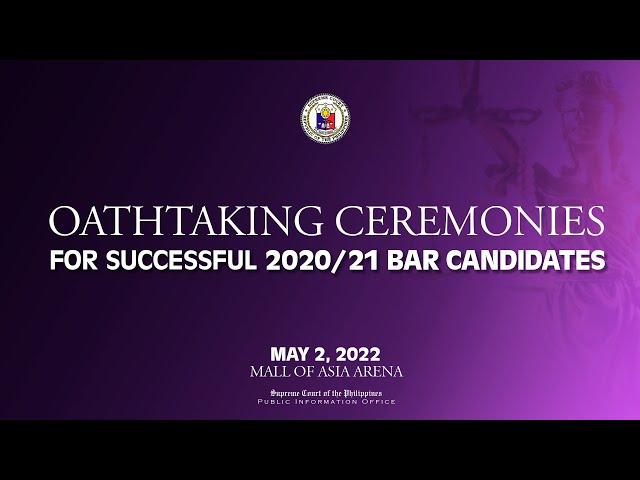