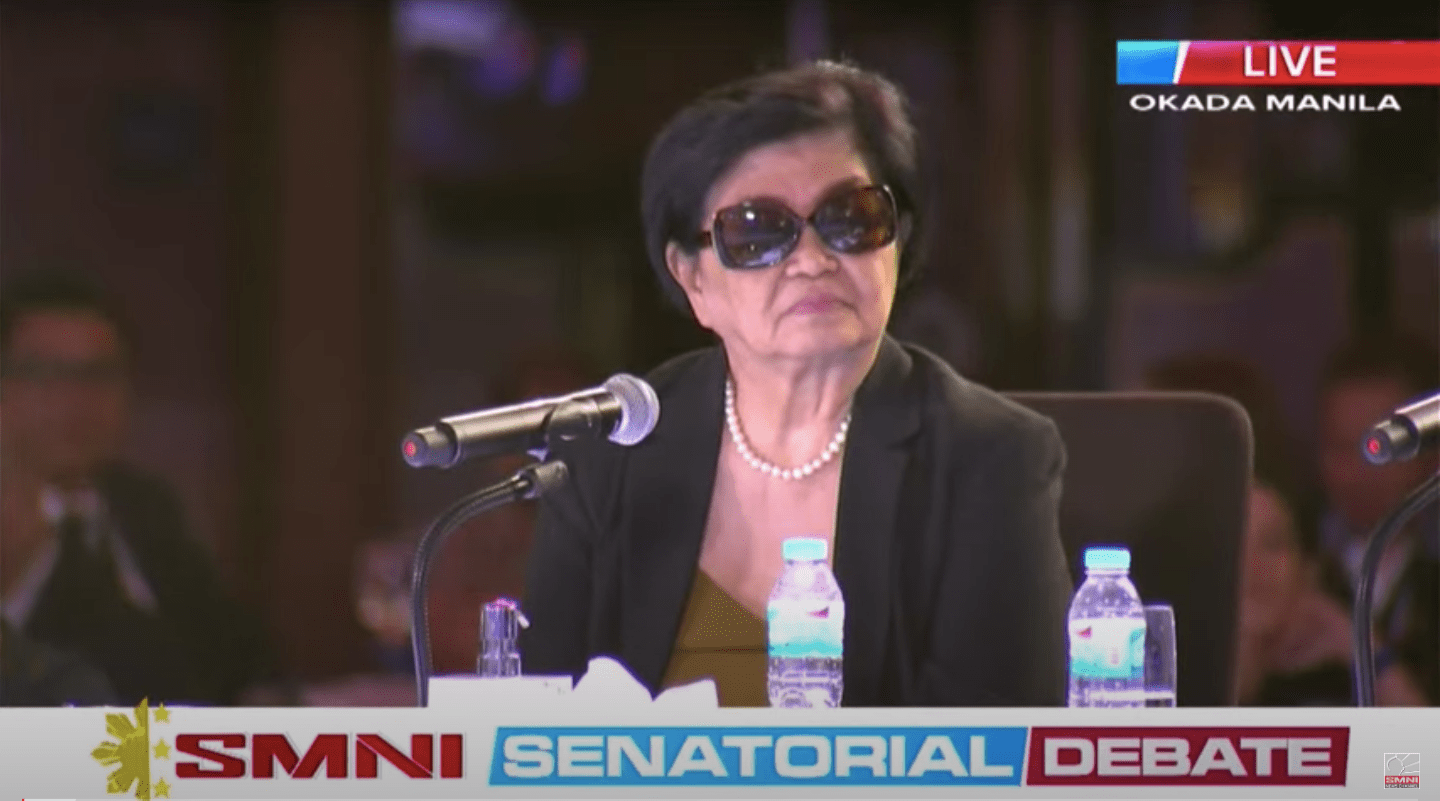 Screenshot of political scientist Clarita Carlos as a panelist on SMNI's election debate.

Facebook Twitter Copy URL
Copied
'To avoid any misinformation or misrepresentation, kindly refer to the official roster of the regular faculty members, professor emeriti and professorial/senior lecturers of the UP Department of Political Science, found on our website,' the department says

The University of the Philippines (UP) Department of Political Science issued a public notice on Saturday, May 21, distancing itself from retired professor Clarita Carlos, who had been a favored analyst of the supporters of presumptive president Ferdinand “Bongbong” Marcos Jr.

“To avoid any misinformation or misrepresentation, kindly refer to the official roster of the regular faculty members, professor emeriti and professorial/senior lecturers of the UP Department of Political Science, found on our website,” the department said on social media on Saturday.

The roster does not include Carlos, who has been referred to as a “UP professor,” especially by Marcos supporters who defend the presumptive president. The supporters’ line of reasoning is, if Marcos, criticized for his lack of platform, can pass a “terror” professor, then he would make a good leader.

Carlos has been criticized for past remarks seen to whitewash the atrocities of Ferdinand Marcos’ Martial Law.

When the late dictator was given a hero’s burial in 2016, which sparked massive protests, Carlos told ABS-CBN, “We allowed him to govern us for 21 years, so we were also in collusion with what was happening at the time, so let’s not jump up and down and continue to demonize the person.”

Carlos was part of the panel in the presidential debates organized by SMNI, Marcos’ preferred network.

Carlos is also part of an alleged list of potential Cabinet members of the incoming Marcos government, but this list had been denied by Marcos’ spokesperson Vic Rodriguez. (Two entries in that list have come true: Sara Duterte as education secretary and Benhur Abalos as interior secretary.)

Carlos further ruffled the feathers of UP professors with her remarks after Marcos Jr.’s presumptive victory, including asking the daughter of opposition Senator Francis Pangilinan, Frankie, to write a 5,000-word essay if she had to criticize Marcos.

According to Carlos, she retired in 2011 and had always identified herself as a retired professor. Carlos said her department took issue with her UP identification.

“I did not take this unjust, idiotic, and clearly malicious accusation sitting down and challenged those who took this stand to defend their baseless and brainless claims, in a department meeting,” Carlos said in a post on her Facebook page on Saturday.

Carlos said the issue was clearly political, and that her colleagues in her former department just did not support Marcos.

“One does not need an IQ of 140 to see the real issue here…. It is not about being retired or active…but, clearly, it is about my not worshipping in the altar of their chosen candidate,” said Carlos. – Rappler.com