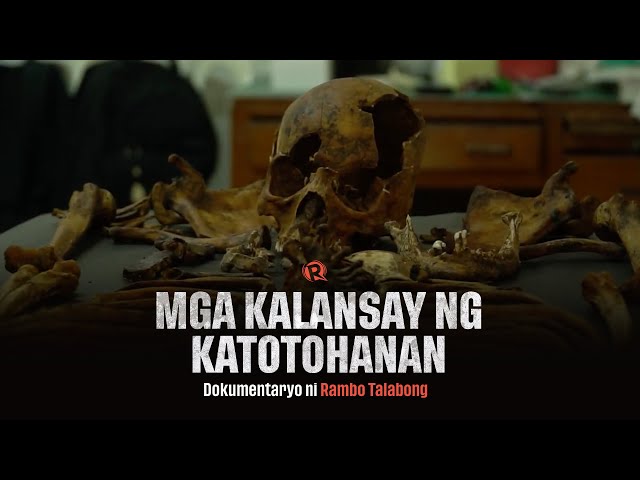 MANILA, Philippines – After being told that they would have to pay more and could face danger and discrimination, families of Philippine drug war victims agreed to fake the death certificates of their kin.

The instigators were the funeral parlors, according to at least five families who spoke with Rappler in separate interviews.

We took a closer look at the stories of three families. For their security, they have been identified as case numbers 6, 21, and 29.

The Rappler probe complements the investigation by Manila-based forensic pathologist Raquel Fortun which involved reexamining the exhumed remains of drug war victims who were declared to have died of natural causes.

In the bones, she found signs of human intervention, the most obvious being bullet holes.

The fault of the funerals

Cases 6, 21, and 29 were declared in their death certificates to have died of acute myocardial infarction, hypertension, and pneumonia, respectively. But as witnessed by family members and supported by the autopsy of Fortun, they died from gunshot wounds.

The doctors who were entrusted with rules in examining the bodies and reviewing the death certificates got away with lying about the true causes of death. This, even when the victims’ bodies were obviously riddled with bullets.

The doctors were prone to being lied to because they were allowed to perform verbal autopsies – this is where physicians rely on the testimony of the morgues and the families of victims to register the causes of death.

Ideally, the funeral parlors and the family members inform the doctors in good faith, but in some cases, we discovered that morgue staffers told victims that autopsies would be costly and could be risky for them. This pushed families to agree to lie about their kin’s death.

The families missed the chance of filing criminal complaints against the killers of their relatives when they attributed their deaths to natural causes and signed the waiver at the funeral parlor, saying they would not file any complaints.

In a phone interview with Rappler, Caloocan City police chief Colonel Samuel Mina said that, in every killing, no matter what is indicated in death certificates, the police should conduct an investigation on their own, without the prodding of a complainant.

Having responded to the crime scene and seeing the aftermath of the killings themselves, they would be in a position to conduct a probe motu proprio.

But the signed waivers meant no cooperation from the families who were key witnesses. They clearly spelled doomed investigations.

Most of the families were also too scared to speak with the police, suspecting that they were behind the killings.

“We know they (the killers) were cops, but were just in civilian clothing. Because, at that time, police were wearing civilian clothes in operations. They didn’t wear their uniforms,” said Inday, the aunt of one of the victims.

Rappler checked with the Caloocan police if the killings of case numbers 6, 21, and 29 were ever solved. Mina said they could not confirm because a fire engulfed the Caloocan City Police Office in 2017 and burned their case folders.

The death certificates of case numbers 6 and 21 were handled by Three Lights Funeral Homes, while that of Case Number 29 was prepared by Sir John Funeral Services.

The morgues were located near each other, all based in northern Caloocan City.

Rappler visited Three Lights along Barugo Road only to find that it had been closed down. While it was operating, Three Lights was located just a stone’s throw from the Caloocan City Police Office’s north extension office.

Case Number 6 was also handled by another mortuary – Jenne Funeral Homes, a funeral house run by proud members of the Iglesia ni Cristo.

Rappler went and spoke with Jenne staffers, a couple who ran the parlor, but they declined to give comment.

Its manager since January 2022, Pilita Franco, said any staffer knows that autopsies are mandatory for anyone shot dead.

“Hindi po namin ginawa iyon (We did not do that),” said Franco.

Rappler found out who the contact between the family of Case Number 29 and Sir John Funeral Services was.

A certain Raffy Faeldonia signed it on behalf of the funeral parlor. Rappler reached out to Faeldonia, who also denied faking the death certificate. He simply signed the contract, he said.

“If you ask me, I have no knowledge because my number one policy is that I never let a corpse be buried without an autopsy,” Faeldonia told Rappler in Filipino during a phone interview.

Faeldonia said another staffer faced the family of Case Number 6.

“I only signed the contract, but I couldn’t recognize who actually transacted because that issue happened a long time ago,” Faeldonia said.

As of April 2022, Faeldonia was no longer working with Sir John Funeral Services. He set up his own morgue.

Rappler traced the doctors who signed the three death certificates and who attested to natural causes of death despite the bodies being riddled with bullets.

Department of Health and Philippine Statistics Authority rules require attending physicians to report a death to the Philippine National Police or the National Bureau of Investigation if they see that it was caused by violence or crime.

A certain Amadea Cruz, supposedly the attending physician, signed the certificates of cases 6 and 29, while a certain Ramil Razon signed for Case 21.

Above Doctor Cruz’s signature on the certificates was a disclaimer saying she signed on the reported natural causes of death without seeing the bodies herself.

This meant that she diagnosed heart disease and pneumonia for cases number 6 and 29 as causes of death based only on the information given to her by the funeral parlor and the family.

The Department of Health allows this under “verbal autopsy.” The department describes it in its Medical Certification of Death handbook for physicians.

“For the many deaths occurring in the Philippines that are not attended by a physician, the best way of ascertaining the cause of death by the local health authority is through verbal autopsy. This is done by interviewing family members who are knowledgeable as to the probable cause of death,” it said.

Rappler sought Cruz for comment, but former colleagues at the Caloocan City health department said she had already died.

Ramil Razon, the attending physician of Case Number 21, meanwhile, turned from being a private practitioner in Caloocan City to practicing under the Philippine National Police’s Scene of Crime Operations (SOCO) division, Rappler learned.

As of April 2022, Razon was said to be assigned to Marinduque. Rappler sought Razon’s comment through text messages and calls, but he has not yet replied as of posting.

Before death certificates in Caloocan are recorded in the national registry, one person has to sign them first: the city health officer.

For the three cases that Rappler examined, the Caloocan City health officer tasked to “review” the death certificates was Maybelle Placencia-Sison.

As of April 2022, Sison was no longer the head of the city health department. She headed the Caloocan City North Medical Center.

In an interview with Rappler, Sison denied playing a role in the forgery.

While the death certificate did say that she “reviewed” its contents, it did not mean that she reexamined the body, spoke with the families, and quizzed the attending physician. She only checked if the certificate was properly filled out.

“As city health officers, we just verify all the data, if it is all complete, because they will submit it to the civil registry,” Sison said.

In short, the city health officer only reviews the death certificates in form, but not in substance.

The reason for the limited role of the reviewing physician is also logistical, given that thousands of annual deaths in Caloocan could not be reviewed by just one city health officer.

Sison recognized it as a systemic problem.

“If only I had the power, maybe I will do something about that, but this is where political will comes in. Sometimes, if you’re too strict, people will complain. If I had my way, we would like to teach them discipline, how to do things properly,” she said.

With vulnerable families consenting to the lies on the death certificates, human rights lawyer Francis Mangrobang, in an interview with Rappler, explained it would be difficult to exact accountability.

Many funeral parlors, like Three Lights Funeral Homes, have also closed. Those that have remained open have new staff, as in the case of Sir John Funeral Services.

But, Mangrobang argued, the funeral parlors could also be sued for forgery, if they could be proven to have deceived the families and the reviewing doctors.

For the families, it would be another treacherous battle for justice.

After losing their kin to still unidentified killers, they suffered under a medico-legal system that forced them to lie about their loss.

In June 2022, Rodrigo Duterte will retire from the presidential Palace. His war on drugs has remained popular – even after getting entangled in multiple controversies, including a probe by the International Criminal Court.

For the victims’ widows and orphans, however, Duterte leaves behind a legacy of death. – Rappler.com