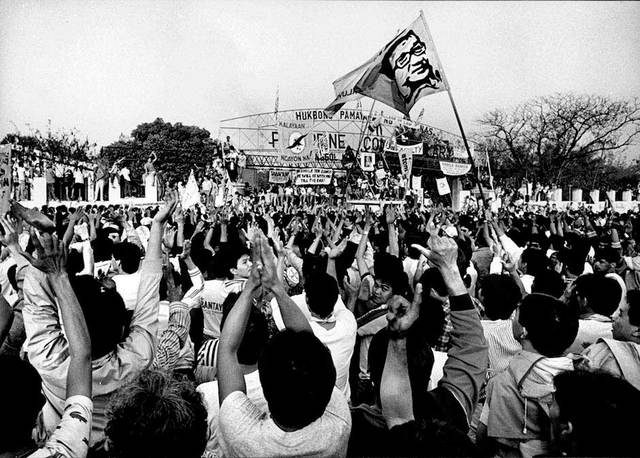 Facebook Twitter Copy URL
Copied
Rappler lists down the places, symbols, and songs that remind us of the EDSA People Power Revolution

MANILA, Philippines – The People Power Revolution gave rise to personalities who have become important names in the nation’s history.

Other than the revolution and its people, we also remember the places, symbols, and songs that became part of this historic event.

Rappler lists these down in commemoration of the 31st anniversary of the EDSA People Power Revolution. They remind us of a successful, peaceful revolution that restored democracy in the country.

The L hand symbol (done by extending the thumb and the index finger pointing up) may connote “loser” for Westerners. But for Filipinos, it stands for “laban” (to fight), and was the famous hand gesture of protesters during the People Power Revolution.

Laban also happens to be the acronym for Laban ng Bayan, a political coalition formed by former senator Benigno Aquino Jr in 1978. The symbol was first seen during that year’s elections, and again during his funeral parade in 1983.

Yellow has become the official color of ribbons, arm bands, and other EDSA revolution paraphernalia (hence it was also called the Yellow Revolution). Through the years, the color has been associated with former president Corazon Aquino, who was catapulted to power by the same revolution.

The use of the color began as reference to the song “Tie A Yellow Ribbon ‘Round the Old Oak Tree,” a song intended for then senator Aquino’s homecoming after his exile in the US. It was later on adopted by the opposition, in contrast to the Marcos administration’s red motif.

Radio Veritas, or dzRV, played a vital role in informing the public about events during the EDSA revolution. It became the vehicle for people to gather in 1986, after former Jaime Cardinal Sin made a public call for support through the radio station.

Radio Veritas also covered events that government-owned stations didn’t cover: a live long distance interview with Aquino during his US exile, his assassination and funeral procession, the campaign of Cory Aquino for the snap elections, and the tally of election results.

The radio station was inaugurated in 1969, or 17 years before the People Power Revolution.

The “salubong” is one of the most celebrated parts of the People Power Revolution. The term refers to the converging of military and security forces with the civilian attendees to join the protest against the administration.

The re-enactment of this part of the EDSA revolution is among the events included in the commemoration of the uprising.

The structure was designed by architect (and now National Artist) Francisco Mañosa and was completed in 1989 – 3 years after the revolution.

Also called Mary Queen of Peace Shrine, the shrine was constructed in honor of the Virgin Mary to give thanks for the peaceful EDSA revolution. It is located at the corner of EDSA and Ortigas Avenue and lies on a lot donated by Don Paco Ortigas and John Gokongwei.

Robinsons Galleria, the mall just behind the shrine, was constructed and opened in 1990.

Another structure built to commemorate the EDSA revolution is the People Power Monument, located at the corner of EDSA and White Plains Avenue, less than a kilometer away from the EDSA Shrine.

The monument was built by sculptor Eduardo Castrillo and was finished in 1993 – or 7 years after the revolution.

Club Filipino in Greenhills, San Juan became notable for being the venue of Cory Aquino’s presidential inauguration in 1986, and later the venue where her son announced his bid for the presidency in 2009.

The place was established as early as November 1898 and served as an exclusive social club for illustrados and politicians. It originally bore the name Club Filipino Independiente. Americans later renamed it Club International, then Club (pronounced “Cloob”) Filipino.

Club Filipino was built with no official clubhouse, though. The structure in San Juan was inaugurated only in 1970.

Camp Aguinaldo was one of the rallying points during the EDSA Revolution, with then Defense Minister Juan Ponce Enrile defecting against the administration.

The camp was established in 1935 and was originally called Camp Murphy, in honor of the first American high commissioner Frank Murphy. It originally covered the current areas of both Camp Aguinaldo and Camp Crame.

The two camps were separated after World War II. Camp Murphy was renamed Camp General Emilio Aguinaldo in 1965, after the country’s first president.

Camp Crame also was a significant point in the revolution, as then Defense Minister Enrile crossed from Camp Aguinaldo to Camp Crame to join then Philippine Constabulary chief Fidel Ramos.

It now houses the Philippine National Police, which was established only in 1991 as an entity separate from the AFP.

“Bayan Ko” (My Country) is one of the most famous anthems of Marcos oppositionists, with folk singer Freddie Aguilar recording it in 1978.

The song was actually composed in 1928 by Constancio de Guzman and Jose Corazon de Jesus during the country’s struggle for independence against the US.

When it emerged during Marcos’ time, it was banned and was deemed seditious.

Other than during the EDSA revolution, the song was also sung during the funeral of senator Aquino.

Another EDSA revolution anthem is “Handog ng Pilipino sa Mundo” (The Gift of Filipinos to the World), a song composed by songwriter Jim Paredes and recorded by various Filipino artists two months after the revolution.

Magkaisa (Unite) is another song made popular after the EDSA revolution. It was composed by now senator Vicente Sotto and was sung by Virna Lisa Loberiza.

Loberiza is now married and is living in the US with her husband and 3 children.

The song was again heard during the funeral of Cory Aquino, with singer Sarah Geronimo singing it. – research by Loren Bustos and Reynaldo Santos Jr./Rappler.com