TIMELINE: The killing of Jennifer Laude and release of Joseph Scott Pemberton 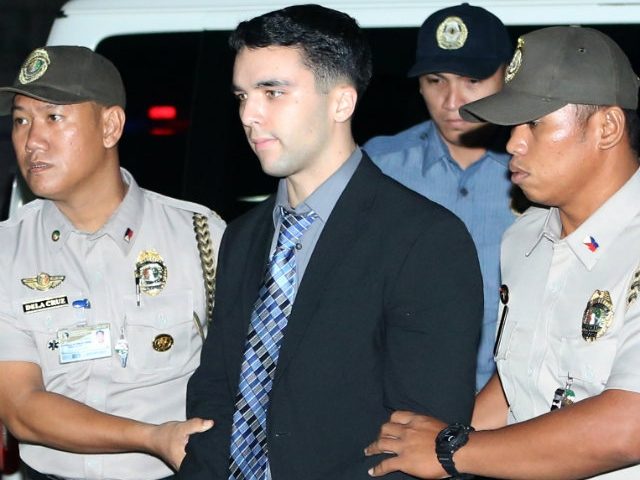 Pemberton was granted an early release by a regional trial court through Good Conduct Time Allowance (GCTA), which was questioned and challenged.

Pemberton was part of around 3,500 US sailors and marines who participated in the Amphibious Landing Exercise (PHIBLEX) in September 2014 under the Visiting Forces Agreement (VFA). Pemberton was on rest and recreation after the drills ended on October 10, 2014.

Here is a rundown of events of the case from the evening of Laude’s death all the way to Pemberton’s release:

Laude, 26, and Pemberton, 19, meet in Ambyanz Nightlife Bar in Olongapo City. Soon after, the pair leave with Laude’s friend Barbie Gelviro for Celzone Lodge, a motel not too far away.

Laude, Pemberton, and Gelviro arrive at the motel at around 10:55 pm. After checking in, Gelviro leaves the pair in the room. Approximately 30 minutes later, Pemberton walks out of the room alone.

Elias Gallamos, the lodge’s cashier, discovers Laude’s body and reports it to the police.

A police report reveals Laude was found dead naked on the floor of a comfort room in Celzone Lodge. Her head “was leaning” on a toilet bowl, while her “lower body was partially covered with a color cream blanket.” Police also saw injuries on Laude’s neck.

Gallamos says Laude entered the lodge with an “unidentified male white foreigner” who sports a marine “style of hair cut” and is between 25 and 30 years old.

The Philippine National Police (PNP) says it is working to arrest the suspect.

The United States embassy expresses sympathy to Laude’s family, and vows to investigate the possible involvement of an American in her death.

The US Pacific Command stops the departure of the two US ships from Subic Bay while authorities investigate the killing.

The PNP names Private First Class Joseph Scott Pemberton as a suspect in Laude’s killing. Police reports call it a hate crime, and say “a case of murder is being readied against the suspect.”

Pemberton’s discovery that Laude was “gay,” the investigation report says, “prompted him to kill the victim.”

Following the VFA, the US takes custody of Pemberton, who is being held onboard USS Peleliu – one of the two ships that brought the US troops to the Philippines.

The Philippines wants the US to hand over custody of Pemberton. The jurisdiction of the case remains with the Philippines.

Laude’s autopsy report says she died due to “asphyxia by drowning.”

Protests erupt in front of the USS Peleliu.

The Philippine government promises justice for Jennifer. She is laid to rest on October 24.

“This means the private complainant proved not just the killing of Laude but that she was killed in a brutal manner,” says Roque. The lawyer calls the filing of the case “a huge victory.”

After the US denies the Philippines’ request for custody of Pemberton, Philippine Department of Foreign Affairs (DFA) Spokesperson Charles Jose says the government will no longer insist on it, and will instead wait for the court’s advice on when the trial will start.

The Department of Justice junks Pemberton’s appeal to overturn the murder charge.

In Pemberton’s arraignment, the suspect refuses to enter a plea. The court enters a plea of not guilty on his behalf.

Pemberton admits attacking Laude, but adds it was “in self-defense.” Roque tells reporters Pemberton told the court Laude was performing oral sex on him when he suddenly felt a penis.

Shocked at the discovery, Pemberton says he pushed Laude who fell from the bed, but got back up and slapped him in the face. Pemberton says he retaliated by choking her, which left her unconscious. He claims he tried to revive her with water in the bathroom, but decided to leave after finding no water. He says she was alive when he left her.

Pemberton’s defense attorney Jay Tolosa says in an ANC report the soldier “felt that he was being raped… he was so repulsed and so disgusted because he did not give his consent to allow a man to do that to him.”

In a 68-page decision, Olongapo City Regional Trial Court (RTC) Branch 74 finds Pemberton “guilty beyond reasonable doubt” of homicide in Laude’s death. The court finds the crime did not have the legal elements of murder, a heavier crime.

The court says Pemberton acted out of “passion and obfuscation” when he “arm-locked the deceased, and dunked [her] head in the toilet.”

Pemberton is sentenced to 6 to 12 years imprisonment. The Philippine and US governments clarify provisions of the VFA over where the Marine should be incarcerated.

Pemberton’s homicide conviction is the first under the VFA since the two countries signed it in 1998.

Pemberton’s defense files an appeal seeking to reverse the conviction.

The Olongapo RTC reduces Pemberton’s jail term from 12 years to 10 years. He is also denied bail.

Pemberton withdraws his appeal from the Supreme Court and accepts the 10-year sentence from the earlier ruling.

The Olongapo RTC gives Pemberton full GCTA credits and approves his early release, 4 years ahead of his full sentence. The Laude family questions how his GCTA was computed, given that he was isolated in a special military facility in Camp Aguinaldo.

Is Pemberton, an American soldier, even covered by GCTA law?

Roque, now the presidential spokesperson, says he “deplores the short period of imprisonment meted on Pemberton who killed a Filipino under the most gruesome manner.”

Just days after crying injustice, Roque justifies Duterte’s pardon by saying Duterte cleared only the punishment imposed on Pemberton, not the US soldier’s conviction.

The DOJ confirms Pemberton did not go through the usual procedure – as his lawyer Rowena Garcia Flores says she did not apply for the pardon, and neither did the US government, according to Foreign Affairs Secretary Teodoro Locsin Jr.

The Philippines is set to deport Pemberton, escorted by the Bureau of Immigration. The DFA says it will not intervene.

As Pemberton’s release process continues, Jennifer’s mother Julita says Duterte broke his promise to keep Pemberton behind bars for as long as he was president.

Pemberton is deported from the Philippines’ Ninoy Aquino International Airport and flown out on a US military aircraft. – Rappler.com