‘Daughter of the killing fields’ 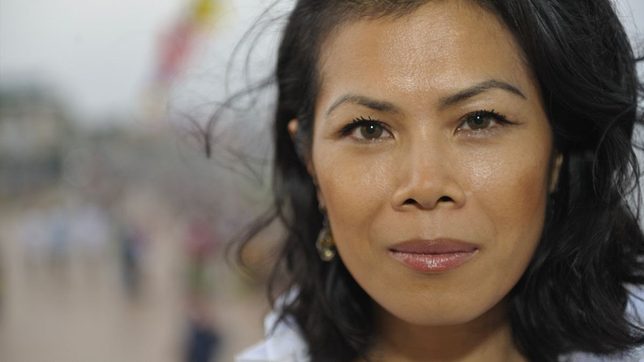 I met a remarkable woman recently. Her name is Theary Seng – and her story of loss, love and courage is extraordinary.

It began in the mid-seventies during the reign of the Khmer Rouge. Her parents were killed but it was the murder of her mother, while she and Theary were in prison, that has left acute memories. She remembers going to sleep in the arms of her mother only to wake up without her.

Along with other children, Theary, who was then about six or seven years old, witnessed a number of executions in prison. The genocide, which happened from 1975 to 1979, took the lives of up to two million people, 21% of Cambodia’s population.

During the day, Theary was tasked to collect cow manure for fertilizer. This gave her the freedom to go out but the “stench of human flesh” assailed her. The grounds outside the jail turned out to be mass graves.

Whenever she would return to prison, the guards would shackle her but because she was so skinny, the chains would fall off from her ankles.

Theary was able to leave Cambodia in 1979. She was only a seven-year old child but she carried the weight of her painful experiences.

Together with relatives, she took a dangerous journey out of Cambodia, reaching Thailand where they lived in a refugee camp for a year. This was where a Christian congregation in Michigan found them and took them to the US.

(For those interested in her life story, Theary wrote a memoir, “Daughter of the Killing Fields,” published in 2005.)

Many years later, Theary would graduate from Georgetown’s School of Foreign Service and earn a law degree from the University of Michigan. And then the pull of home became irresistible in the aftermath of the 1991 Paris Peace Agreement wherein political factions came together to lay down the foundations for a democratic system and elections.

By this time, Theary was a human rights lawyer carrying a US passport. In 1995, she started visiting Cambodia every year until she decided to live there permanently in 2004. It was a deep love for her country that brought her home. It was also part of a difficult healing process, returning to where her wounds began, to her country with a tortured history.

Today, under Prime Minister Hun Sen’s strongman regime, Theary is among over a hundred political and human rights figures charged with “conspiracy to commit treason” and “incitement to create social disorder.” She was caught by surprise, she said, because she has not been active with the civil society group she founded, the Cambodian Center for Justice and Reconciliation, because of heightened repression.

It was because of this case that I got to meet Theary online. I interviewed her for a podcast that features persons in our part of the world who are fighting for democracy, showing defiance and hope. Entitled “The Great Asian Pushback,” it is produced by the Council of Asian Liberals and Democrats.

You can listen to the interview with Theary here. https://rss.com/podcasts/greatasianpushback/311507/

These mass suits and trials are “unprecedented in recent history,” Theary told me. “These are popular charges of the regime, not based on fact and law and are prime facie absurd.” Despite the circumstances surrounding her, Theary was lively and animated in the 40-minute interview.

The government is going after her because she is one of the visible dissenting voices in Cambodia. The regime perhaps thought that, by harassing her through the courts, she would leave for the US. But they are reading her wrong.

In a recent court hearing, the 50-year-old lawyer and activist chose to represent herself although she has an international counsel. It was her way of showing resistance, she said.

I asked her if she fears being detained, a reprise of what happened to her decades ago. Theary is clear about how to navigate life in Cambodia, explaining to me that “freedom of conscience takes primacy over freedom of movement.” She continued, “The regime cannot take away my freedom of conscience.”

She cannot be threatened easily, she added, because the government cannot go after anyone else to pressure her: She has no husband and children. She has no property and is living in a rented home in Phnom Penh.

What matters to Theary is that she is able to inspire and encourage her people to peacefully fight for their rights. “All of us should do our part. We cannot sit by the sidelines,” she said. “We stand for justice, truth and law… Peaceful resistance is the only way.”