Mayweather Sr.: Pacquiao should have won 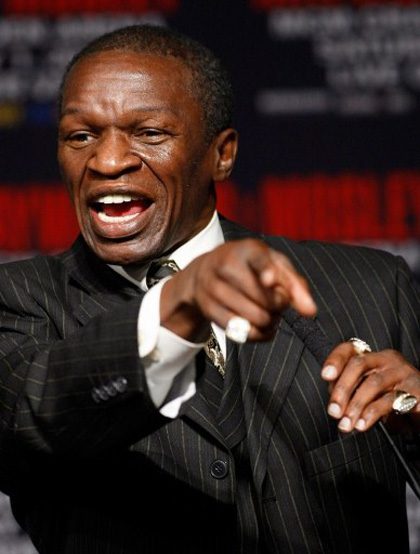 MANILA, Philippines – Floyd Mayweather Sr., in a surprising show of support for Manny Pacquiao, told media that he thought the Filipino boxer won the fight against Timothy Bradley.

“I do feel that Pacquiao did win the fight,” Mayweather Sr. told media. “I feel like it was a gap where you can’t see who was winning the fight. Bradley came back in the later rounds, but in all the early rounds Pacquiao dominated the fight.”

The father of boxing champ Floyd Mayweather Jr. was at the MGM Grand Garden Arena for the Pacquaio-Bradley match on Saturday, June 9 (Sunday, June 10, in Manila), and was among those who witnessed Pacquiao lose his WBO World Welterweight title.

“I thought Tim Bradley put up one helluva fight. But I didn’t think he won the fight,” Mayweather Sr. added.

Mayweather Sr.’s assessment supports scores given by Compubox and other sports networks, which unanimously gave the win to Pacquiao.

The judges, however, didn’t agree with Mayweather Sr.

Jerry Roth is the only judge who scored the fight in favor of Pacquiao, 115-113. Judges CJ Ross and Duane Ford scored it 115-113 in favor of Bradley.

Pacquiao told media he is willing to meet Bradley for a rematch in November, erasing the possibility of a highly-anticipated Pacquiao-Mayweather match this year.

But Mayweather Sr. offered optimism that a fight between the People’s Champ and his son will still happen. “When they fight, it’s going to be the biggest ever. I say when, because there’s a good possibility that fight will take place,” he said.

Mayweather Jr., an undefeated American boxing champ, is currently serving jail sentence for domestic abuse charges. He doesn’t have the chance to watch the Pacquiao-Bradley match, since he has no access to a television, computer, or telephone in his cell. – With reports from Natashya Gutierrez/Rappler.com