Facebook Twitter Copy URL
Copied
‘Boxing is seen by some as a cruel sport. But in this case, it healed old wounds and eventually reunited a broken family.’

There’s more to the fame and fortune that Cagayan de Oro’s new boxing hero got from his silver medal victory in the Tokyo 2020 Olympics: the sight of his estranged parents together for the first time in years and letting bygones be bygones.

Domestic problems, aggravated by extreme poverty, separated the parents of Paalam when he was only six years old. The broken family took its toll on the child who would later grow up picking up garbage at what used to be the city’s sanitary landfill in Upper Carmen.

Now 24 years old and relatively wealthy, the Olympian returned to Cagayan de Oro on Tuesday, August 24, seeing his father Pio Rio and mother Jocelyn together for the first time in years, mending ties, and reuniting in cheering for him as he stepped down from the plane in Laguindingan, Misamis Oriental.

Paalam’s Olympic victory worked wonders for the Paalams – it brought pieces of the broken family together. Although his parents now have families of their own and can never live under one roof again, they have buried the hatchet. They now see eye to eye and talk to each other.

Inside a city hall-owned bus for VIPs sent to fetch Paalam, his parents sat beside each other. Paalam, happy, sat at the back of his father and mother, leaning forward and showering them with kisses as he wrapped them around his arms.

(For the first time, the three of them were in one place and very happy. His parents became friends again and that’s something rare for estranged couples.) 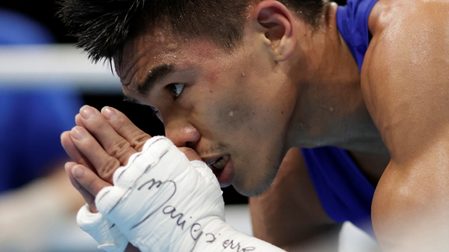 Stephen Dacoco of city hall’s sports program group said the scene was emotional, touching, and made those who saw it teary-eyed.

Coming from a secluded farming community in Talakag town in Bukidnon province, the Paalams moved to Balingoan, Misamis Oriental, where the future Olympian spent his childhood for some time.

Family problems forced Paalam’s mother to leave the family for good, and the Paalams relocated to Cagayan de Oro where they tried their luck.

It was in Cagayan de Oro where Paalam had his first amateur fight in the ring, and where he caught the eye of those running the local boxing program.

At 10, he was already receiving boxing training under the tutelage of former Olympian Roberto Jalnaiz, who served in the provincial government of Misamis Oriental when Cagayan de Oro Mayor Oscar Moreno was the province’s governor. The boy would later receive training at city hall when Moreno became Cagayan de Oro mayor.

“Boxing is seen by some as a cruel sport. But in this case, it healed old wounds and eventually reunited a broken family,” Rivera told Rappler.

“This should serve as an inspiration to many other poor children, especially in the countrysides, to dream big and aspire for greatness.” – Rappler.com