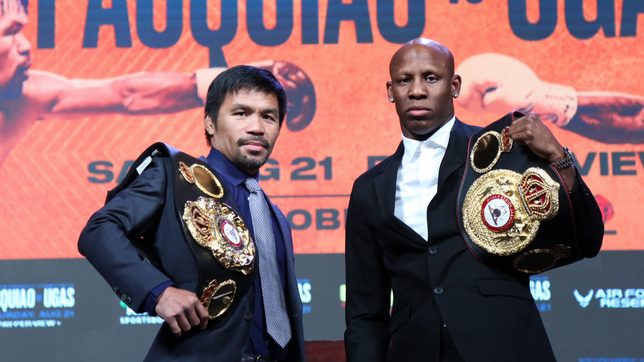 Facebook Twitter Copy URL
Copied
Some may not be sold to the idea of Manny Pacquiao running for president in next year’s elections, but there’s still no questioning his sheer boxing proficiency

They may not all agree with Manny Pacquiao’s politics, but all the bets of these Mindanaoans are on the Filipino boxing icon as he climbs the ring again on Sunday, August 22, despite his nearly two years of boxing inactivity.

Even at the age of 42, the consensus among Mindanao’s boxing aficionados, regardless of their political leanings, is to readily put their money on Pacquiao in his fight with Errol Spence Jr.’s replacement, former Olympic bronze medallist and current WBA super welterweight champion Yordenis Ugas of Cuba.

The much taller and younger Spence, the holder of the WBC and IBF titles, had withdrawn from the biggest fight of his career due to an injury on his left eye’s retina.

Cagayan de Oro-based Judge Isagani Ravidas said, “I have no doubt of his victory. Although up for boxing retirement, Pacman’s passion in boxing is so great.”

Elmer Pamisa, the discoverer and coach of Cagayan de Oro’s pride Carlo Paalam who won a silver in boxing for the country in the recent Tokyo Olympics, said the fight could last for 12 rounds, and Ugas could last the distance, “but my bet is still on Manny.”

“But a well-prepared and high-octane Manny would easily prevail,” Ilogon said.

All of them were not sold to the idea of Pacquiao running for president in next year’s elections, but they’re all in when it comes to their admiration of the sheer boxing proficiency of the only boxer and senator anywhere in the world who holds eight division titles.

(He can seek the vice presidency but if he runs for president, I won’t vote for him.)

Pamisa, himself a boxer before he joined the national team as a coach, opined that a Pacquiao presidency would be disastrous for the country.

(Those around him will just take advantage of him. It’s difficult to run a country.)

Judge Ravidas and coach Ilogon said they were uncomfortable bringing Pacquiao’s politics to the table.

“After Ugas, it would be nice for him to retire for good,” businessman Vito Gandionco told Rappler. “He has fame, fortune, passion, and politics rolled into one. He already has everything in life. But politics is brutal.”

Anthony Pabillore, the former backcourt tandem of Johnny Abarrientos with the once-fabled FEU Tamaraws in UAAP men’s basketball, could only agree. He said Pacquiao “has nothing to prove, but he’s fighting for legacy to become the best ever boxer that comes with speed and power.” But Pacquiao, the politician, has found a fan in former Olympian Roberto Jalnaiz who said the boxing icon can deliver on and off the ring.

“Manny will win this fight, and he will give his best in his other fight in politics. He’s confident that he can help our countrymen. He is serious,” Jalnaiz said.

Others set aside their political views and just acknowledged Pacquiao as a certified warrior in the arts and science of boxing. After all, the fighter boasts of a win-loss-draw fight record of 62-7-2, including 39 knockouts.

At 73, retired ring judge Proculo Maslog has seen everything in boxing.

“Boxers don’t retire. It’s for the love of boxing that Manny keeps on fighting. And there’s no tsamba (lucky break) in boxing. It’s either Pacquiao by TKO or Ugas on points,” said Maslog.

For Cagayan de Oro-based journalist and boxing aficionado JB Deveza: “All the top dogs in boxing like Ali, Tyson, and Julio Ceasar Chavez, didn’t quit until they had enough of the beatings and embarrassing punishment atop the ring.”

“Let’s see on Sunday if Pacman has still it,” he added.

Pacquiao would receive a guaranteed prize of $5 million and an estimated $20 million from pay-per-view sales. According to Forbes, Pacquiao had a net worth of about $26 million as of November 2019.

Win or lose, what he will earn from his Sunday fight would further bolster the senator’s political war chest for the 2022 elections in a country haunted by widespread corruption, poverty, and disunity. – Rappler.com