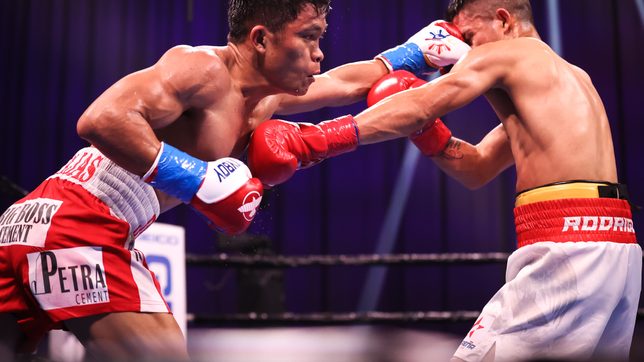 NO STOPPING. Jerwin Ancajas plans to continue training in the US.

MANILA, Philippines – Jerwin Ancajas will have to settle for another title defense than the unification he’s been preparing for.

This developed as Ancajas’ fight with Kazuto Ioka got scrapped following the travel restrictions imposed by Japan due to the threat of new coronavirus variant Omicron.

MP (Manny Pacquiao) Promotions president Sean Gibbons said the Ioka fight has been “postponed indefinitely” and he’s working on Ancajas to stake his International Boxing Federation super flyweight belt against a Mexican in January or February at the latest.

Gibbons also stressed Ancajas’ 10th defense of the 115-pound crown will take place “somewhere in the US.”

“It (cancellation) was unfortunate,” said Gibbons. “Jerwin is looking amazing. He was doing very well in sparring and training.”

According to Gibbons, he’s looking for a suitable opponent ranked within the top 15 for Ancajas.

The cancellation, announced by the Japanese promoters on Friday, came just eight days before Ancajas and his trainer Joven Jimenez were supposed to fly out of Los Angeles, where he held training camp, en route to Tokyo on December 11.

Trying to be upbeat, Gibbons said he’s hoping for the other Filipino boxers – Johnriel Casimero, Raymart Gaballo, Jayson Mama, Marlon Tapales – to be successful in their coming fights before the year ends.

Gibbons added the Ioka unification could be held after Ancajas has defended the title he has held since 2016.

The Ancajas-Ioka tussle was scheduled on December 31 in Tokyo, but it had to be canceled as the Japanese government barred the entry of foreigners since Monday to prevent another spike of COVID-19  cases.

Jimenez said he’s going to maintain Ancajas’ current level of conditioning and training until the date of the next fight gets confirmed. – Rappler.com