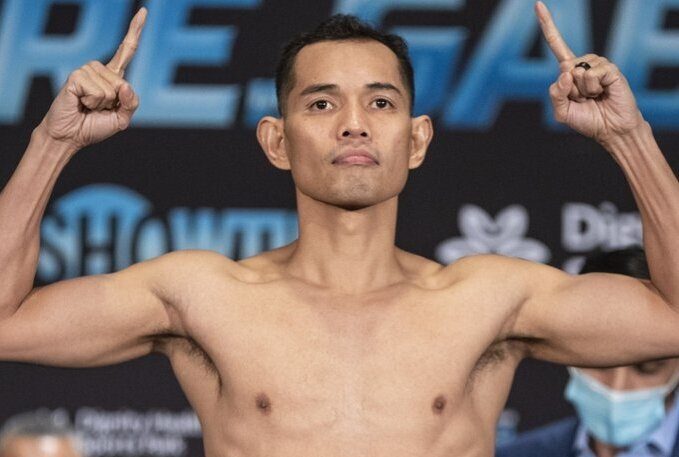 Facebook Twitter Copy URL
Copied
Probing and calculating, Nonito Donaire sneaks in a left hook to the body to knock fellow Filipino Reymart Gaballo out in the fourth round

MANILA, Philippines – There are levels in boxing and Nonito Donaire Jr. certainly belongs to the chosen few destined to be legends.

Brandishing the power that has earned him two Knockouts of the Year, Donaire sneaked in a left hook to the body to knock Reymart Gaballo out in the fourth round on Saturday, December 11 (Sunday, December 12, Philippine time) and extend his reign as the World Boxing Council (WBC) bantamweight champion at the Dignity Health Sports Park in Carson, California.

Probing and calculating, Donaire let Gaballo gain some confidence to exchange punches before unleashing the torpedo-like blow that sent the challenger to the canvas.

Gaballo gamely tried to beat the count and was able to get up only to drop to his knees again.

The 39-year-old Donaire, a four-division world champion and future Hall of Famer, climbed to 42-6 with 28 knockouts and, more important, likely earned a rematch with Naoya Inoue next year.

Only 25, Gaballo absorbed his first loss after 24 wins with 20 knockouts but gained experience on how to tackle a master boxer like Donaire who happens to be his idol.

Just like when he acted as interpreter to Gaballo during the final press conference on Thursday, Donaire again did a class act when he approached Gaballo after the knockout to check on his condition.

Living up to his favorite’s role, Donaire dictated the tempo of the bout, initiating the exchanges and moving forward as Gaballo felt his power.

Gaballo came in prepared for Donaire’s counter left hooks to the head but was unable to duck the body punch that sucked the air out of him.

Marlon Tapales, meanwhile, reintroduced himself to the international stage with a devastating second-round knockout of Hiroaki Teshigawara in their IBF super featherweight title eliminator.

Showing the form and power that made him the 2016 World Boxing Organization bantamweight champion, Tapales caught the Japanese with a barrage of heavy punches for a standing 8-count.

Tapales, one of the stars of Sanman Promotions headed by JC Manangquil, again cornered the taller Teshigawara and unloaded more solid blows that dropped the Japanese anew but got saved by the bell.

Not about to waste the chance, Tapales went on full assault again early in the second round and knocked Teshigawara out with another flurry capped by a wicked right.

The 29-year-old Tapales, now being trained by Ernel Fontanilla with assistance from Lucas Sugar, raised his record to 35-3 with 18 knockouts while Teshigawara, who entered the ring riding a string of 6 knockouts, skidded to 22-3-2 with 15 knockouts.

Tapales earned a crack at WBA/IBF titlist Murodjon Akhmadaliev and this could happen in either February or March, according to MP (Manny Pacquiao) Promotions head Sean Gibbons in the post-bout conference. – Rappler.com