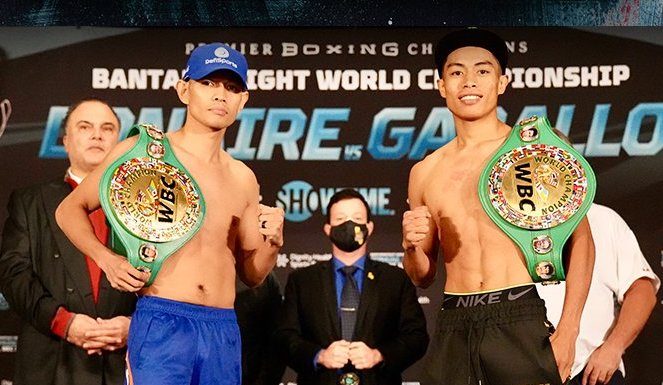 MAIDEN DEFEAT. Reymart Gaballo suffers the first loss of his professional career at the hands of Nonito Donaire Jr.

Facebook Twitter Copy URL
Copied
'You are strong, you are smart, you are talented,' says Nonito Donaire Jr. about Reymart Gaballo after winning their all-Filipino clash

Mindanao pride Reymart Gaballo from Polomolok, South Cotabato, lost for the first time in a stinging way, but gained valuable experience how to deal with a high-caliber tormentor who happens to be his ring idol.

A left hook by Nonito Donaire Jr. to the liver tainted the immaculate 24-0 record of the 25-year-old Gaballo as he suffered the first knockout of his young boxing career in California on Saturday, December 11 (Sunday, December 12, Manila time).

Boxing fans took to social media to comfort Gaballo, believing in his capability to rise up to the challenge.

Gaballo also developed a fan base in the United States.

“I believe this is just the beginning of Reymart’s career as a world champ. Since day one that he arrived here in the US, I’ve been following him,” said overseas Filipino worker Darwin Dante.

“I skipped my work just to watch his fight live in Carson. Year 2022 will be an epic comeback for Reymart. I’ll start saving money now for a ringside seat if ever he will be featured in a main event at the MGM Arena,” Dante added. “Mark my word: this will hold true in the future. We’ll be back, champ.”

The 39-year-old Donaire, a four-division world champion and future Hall of Famer, had immediately checked the condition of Gaballo, who struggled to stand up after the powerful hook sucked the air out of him.

“Reymart, you are a warrior. You are strong, you are smart, you are talented,” Donaire said. “Thank you for sharing the ring with me. I am humbled by the way you really brought the fight. I wish to see you as a world champion someday.”

“Know if you need me, I’ll be there for you. You have my respect…and my friendship.”

Barrientos said he spent his teenage years in Polomolok working as a laborer and it was the place where he first laced on the gloves.

Donaire, who is actually Gaballo’s neighbor from nearby General Santos City, hiked his ring record to 42-6 with 28 knockouts, and more importantly, proved his case for a rematch with Japanese great Naoya Inoue in 2022. – Rappler.com