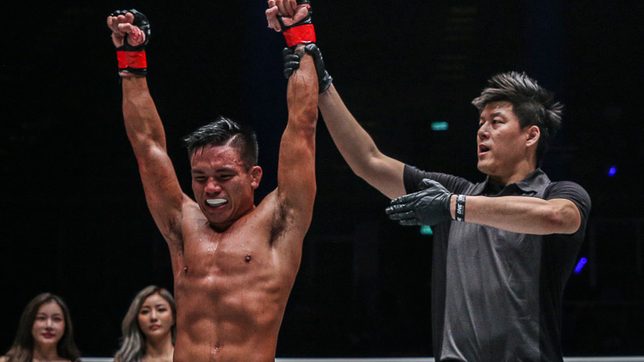 Mark Abelardo. Photo from ONE Championship

When Mark “Tyson” Fairtex Abelardo returns to ONE Championship, expect him to be a man on a mission.

The Filipino-Kiwi bantamweight looks to get his name back in the win column when he battles Fabrício “Wonder Boy” Andrade in ONE: No Surrender on July 31 in Bangkok, Thailand.

Determined to atone for his previous setback, Abelardo has some choice words for his opponent.

“I wish him all the best and for him to keep safe during training camp, because when the fight comes, I am going to bring it – so I hope [he’s] ready,” Abelardo said.

The 28-year-old is coming off a disappointing outing against “Pretty Boy” Troy Worthen in February in ONE: King of the Jungle, where he got dominated from the opening bell en route to a unanimous decision loss.

In that match, Worthen’s world-class wrestling proved to be too much for Abelardo, who found himself on his heels more times than he would have liked in the contest.

Not one to be disheartened by a loss, Abelardo looks at that match as a situation he can learn from, especially with how Worthen methodically broke him down by exerting pressure from the opening bell. (READ: Mark Abelardo made countless sacrifices for martial arts dreams)

“Troy was very good. His game plan was to utilize his wrestling well and that’s something I look to improve. I don’t want to be put on the fence like I did in that fight,” he said.

Knowing that he has the advantage when it comes to the mixed martial arts discipline, the Fairtex athlete plans to keep his opponent guessing when the circle door closes next Friday.

“I’ll be looking to mix it all up, both standing and on the ground, just pressure him everywhere and just look to break him,” Abelardo said.

“I want to utilize a lot of my wrestling, take him down when the opportunity comes, and just wear him out and look from the finish from there.”

At the end of the day, he is hopeful that his effort results in a highlight-reel finish, something that he has been known for throughout his career.

“I want to look for a finish like I always do. Wear him down, put some pressure on him, and look to finish him in the second or if not, the third.” – Rappler.com

ONE Championship returns to live action for the first time in nearly 5 months with ONE: No Surrender, a closed-door, audience-free card set for Friday, July 31, in Bangkok, Thailand. Catch the event live and for free by downloading the ONE Super App.