PROVING HIS WORTH. Kai Sotto knows he has to fight for his spot in the 36ers' rotation.

The NBA remains the ultimate goal for Kai Sotto.

Sotto seeks to get better during his stint with the Adelaide 36ers in the Australian National Basketball League (NBL), keeping his sights set on becoming the first homegrown Filipino to reach the NBA.

“The long-term goal is always to make it to the NBA,” Sotto said in a story published on the NBL website.

“Hopefully next year or the following year. That’s the ultimate dream.”

The 7-foot-3 Sotto, though, tempered expectations as he sees action in Australia, knowing he has to fight for his spot in a team that features one of the best big men in the NBL in Daniel Johnson.

Johnson is a three-time All-NBL First Team member and led the league in rebounding twice.

The 36ers also have Isaac Humphries, a 6-foot-11 slotman who played for the Atlanta Hawks in the NBA.

“I’m a rookie so I’ll start with my specialty, which is defense and rim protection,” the 19-year-old said.

As he tries to earn his minutes, Sotto relished the experience of learning from the 36ers’ veterans, particularly Johnson.

“[G]uarding Daniel Johnson is a challenge for me every day,” Sotto said. “You can’t predict what he’s going to do because he can pass, he can shoot, he can post up, and he’s got good strength.”

“Going to practice and guarding him is a challenge, but when we play with each other, now that’s a good feeling. That’s a good sight to see.”

Sotto and Adelaide will kick off their NBL campaign against the Tasmania JackJumpers on December 3. 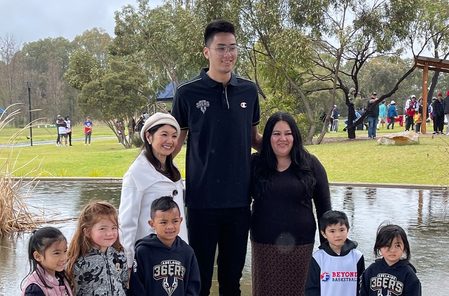