Facebook Twitter Copy URL
Copied
‘We found a way to just get it done,’ says Finals MVP Steph Curry as he celebrates with Klay Thompson and Draymond Green with four fingers raised to represent their shared titles

The tears began to flow for Stephen Curry shortly before the clock ran dry, as the Golden State Warriors merely had to wait for their fourth championship in eight seasons to become official.

A two-time regular-season MVP, Curry was named NBA Finals MVP for the first time, scoring 34 points as the Warriors returned to NBA glory with a 103-90 victory over the host Boston Celtics in Game 6 of the Finals on Thursday, June 16 (Friday, June 17, Manila time).

“You always have a doubt, but you know how long the road is to get back here because of how hard it is to win at this level,” Curry said when asked about the path from worst record in the NBA to champion in three seasons.

“We found a way to just get it done.”

With the victory, the Warriors cemented their place as one of the NBA’s great dynasties.

The 4-2 Finals series win brought the Warriors a seventh championship, breaking a tie with the Chicago Bulls for sole possession of third place in the all-time winners list behind the Celtics and Los Angeles Lakers, who both have 17 titles.

The Warriors are also the first team to win four championships in an eight-year span since the Bulls won six from 1991 to 1998. During the celebration, on the edge of the trophy-presentation stage, Curry, Klay Thompson, and Draymond Green sat arm in arm with four fingers raised to represent their shared titles.

“I knew it was a possibility, but to see [a championship] in real time… holy cannoli, this is crazy,” said Thompson, who missed two full seasons with knee and Achilles injuries and didn’t return until January 9 this season.

The triumph is a remarkable turnaround for the Warriors, who missed the playoffs in the past two seasons amid a torrent of injuries before defeating the Denver Nuggets, Memphis Grizzlies, Dallas Mavericks, and Boston Celtics this year to claim the Larry O’Brien trophy.

While Boston’s defense was talked up coming into the series it was Golden State’s resistance that proved the difference.

The Warriors had looked to be in big trouble early on in the Finals as poor shooting saw them trail 2-1 in the best-of-seven series, but they gave themselves a lifeline by tightening up on the other side of the ball.

“What got this team over the hump was our defense,” Warriors head coach Steve Kerr said.

It is the seventh title overall for the Warriors franchise, which was founded in Philadelphia in 1946 as one of the original members of the Basketball Association of America.

The Warriors also captured the league’s first championship in the 1946-1947 season. 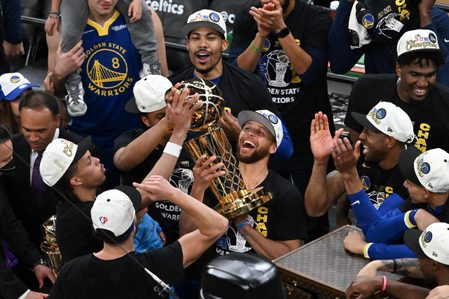