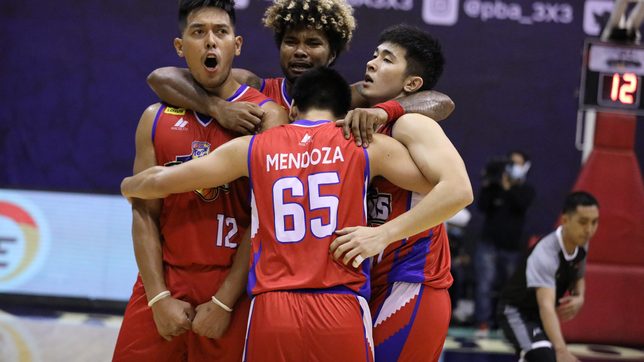 Facebook Twitter Copy URL
Copied
Enduring a couple of semifinal heartbreaks, Purefoods gets over the hump as it nails its first PBA 3x3 title

MANILA, Philippines – There are still no repeat champions in PBA 3×3 as the Purefoods TJ Titans turned back the Meralco Bolts to claim the fourth leg title with a 21-16 finals win at the Ynares Sports Arena in Pasig on Sunday, December 5.

Back in the finals for the third time, the Bolts were aiming to replicate their championship run in the second leg and exact revenge on the TJ Titans after Purefoods booted Meralco out of the quarterfinals in the third leg.

Javelona, though, had other plans as he broke a 15-15 deadlock with a resounding two-pointer and gave the TJ Titans a commanding 18-15 advantage off a nifty fadeaway jumper.

Purefoods then leaned on Jun Bonsubre to dispose of Meralco, with the former San Beda big man scoring all of their last 3 points, including the game-winning shot from beyond the arc.

Joseph Eriobu delivered 5 points, Jed Mendoza chalked up 3 points, while Bonsubre had 3 points for the TJ Titans, who bagged the top prize of P100,000.

Purefoods finally got over the hump after a couple of semifinal heartbreaks as it reached the finals for the first time following a 21-11 mauling of first leg champion TNT Tropang Giga in the final four.

The TJ Titans settled for third in the first leg and placed fourth in the third leg.

Meanwhile, the Bolts matched their runner-up finish in the first leg.

Earlier, TNT clinched third place for the second time with a come-from-behind 21-20 squeaker against Platinum Karaoke.

Almond Vosotros sizzled for 12 points as the Tropang Giga fought back from a 12-16 deficit to take home P30,000.

It was a disappointing ending for Platinum, considering it won all of its first five games of the leg only to lose its last two. – Rappler.com