Barroca, Magnolia hold off Meralco to move on cusp of PH Cup finals 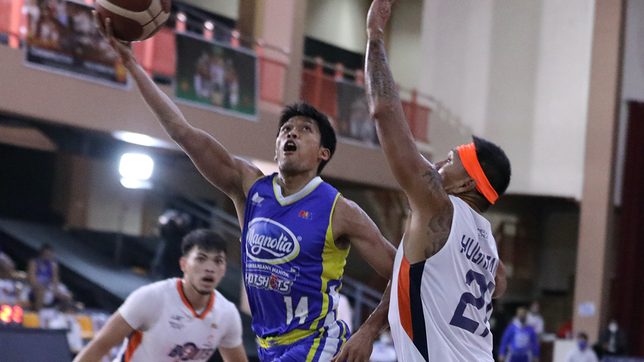 BOUNCE BACK. Mark Barroca redeems himself from a poor performance in Game 3 with a stellar outing in Game 4.

Facebook Twitter Copy URL
Copied
Mark Barroca hits some big shots down the stretch as Magnolia seizes a 3-1 lead over Meralco, a win away from its third all-Filipino finals trip in four years

Magnolia weathered a late Meralco storm to move on the cusp of the PBA Philippine Cup finals with a gritty 81-69 victory at the DHVSU Gym in Bacolor, Pampanga on Sunday, October 10.

Veteran Mark Barroca finished with 17 points and hit some big buckets down the stretch as the Hotshots seized a 3-1 lead in the best-of-seven semifinals, a win away from their third all-Filipino finals trip in four years.

The Bolts trailed by as many as 21 points in the fourth quarter, 50-71, before they erected a 19-3 run anchored on Reynel Hugnatan to cut their deficit to 5 points with 2:30 minutes left.

Hugnatan capped the run with a booming triple as he unloaded 8 of his game-high 21 points in the final salvo.

But Barroca – who scored only 2 points in their Game 3 loss – saved Magnolia from a major collapse, dousing the Meralco fire with a crucial three-pointer of his own in the ensuing play.

After Rafi Reavis and Ian Sangalang split their respective free throw attempts, Barroca put the Bolts beyond reach by canning his foul shots with 20 seconds remaining.

Sangalang also had 17 points in the win to go with 11 rebounds, while Calvin Abueva chimed in 17 points, 12 rebounds, and 3 steals.

Jio Jalalon made his presence for Magnolia with 10 points, 4 rebounds, 4 assists, and 2 steals.

Hugnatan also had 9 rebounds in the loss, which put the Bolts in danger of a a second straight semifinals exit in the all-Filipino conference.

Cliff Hodge had 13 points and 5 rebounds for the Bolts, while Chris Newsome churned out 11 points, 8 assists, and 7 rebounds.