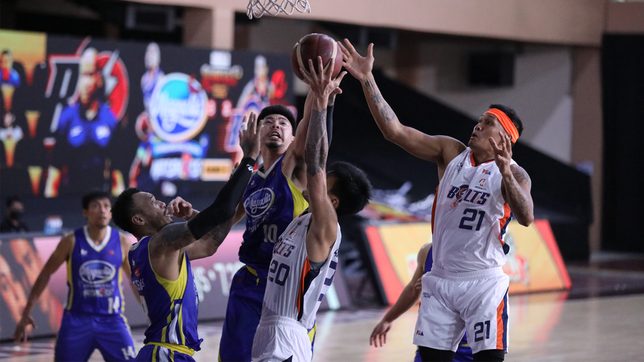 FINALS-BOUND. Ian Sangalang and Magnolia finally get the job done against Meralco.

Magnolia barged into the PBA Philippine Cup finals after dispatching Meralco in six semifinal games with a 93-85 win at the DHVSU Gym in Bacolor, Pampanga on Friday, October 15.

Ian Sangalang stuffed the stats sheet in the series-clinching win, tallying 19 points, 14 rebounds, 6 assists, 3 blocks and 2 steals as the Hotshots reached the all-Filipino finals for the third time over the last four seasons.

Sangalang, the reigning PBA Press Corps Player of the Week, scattered 7 points in the final quarter, while guards Rome dela Rosa, Mark Barroca, and Jio Jalalon delivered the key buckets down the stretch for Magnolia.

The Bolts remained within striking distance off a Cliff Hodge free throw with three minutes left, 80-85, before Dela Rosa and Barroca scored four straight points for an 89-80 Hotshots lead.

Jalalon then put Meralco at bay as he knocked down a floater with a minute left, capping an 11-point, 7-rebound, and 4-assist performance that compensated for an awful shooting game from Paul Lee.

Lee scored just 4 points after missing all of his nine field goals.

Dela Rosa also stepped up for Magnolia, churning out a conference-high 16 points on a 4-of-5 clip from beyond the arc, while Barroca put up 16 points and 2 assists.

Calvin Abueva contributed 11 points and 6 rebounds in the win before he fouled out with less than five minutes remaining.

The absence of Abueva kept the comeback door ajar for the Bolts, but they lost a key player as well in the endgame as Allein Maliksi picked up his sixth and final foul with three minutes left.

Maliksi, who fired a conference-high 29 points in Game 5, got limited to 13 points on 4-of-10 shooting in a heartbreaking night that saw Meralco fall short of the Philippine Cup finals for the second straight year.

The Bolts also reached the all-Filipino semifinals last season but succumbed to eventual champion Barangay Ginebra, no thanks to a Scottie Thompson buzzer-beater in their do-or-die match.

Raymond Almazan led the way in the loss with 16 points, 12 rebounds, and 2 blocks, while Chris Newsome had 14 points, 6 assists, and 3 rebounds.