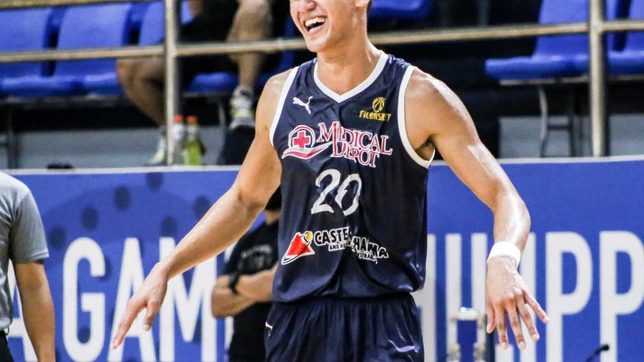 PBA-BOUND. Simon Camacho makes the most out of his Filbasket stint for Medical Depot.

Simon Camacho gets another crack in the PBA.

This time, though, the former Adamson Falcons standout secured a contract as Phoenix signed him up ahead of the Governors’ Cup following his MVP season in Filbasket.

Camacho was selected by TNT in the 2019 PBA Draft but did not sign a contract.

Left without a team and uncertain about his career due to the pandemic, Camacho admitted prior to joining Phoenix that he entertained thoughts of giving up on his basketball aspirations.

“Knowing that basketball has no assurance during this pandemic, I have thoughts of looking for a job and stop dreaming about basketball,” Camacho wrote on Instagram.

But the break Camacho was looking for came as Medical Depot acquired his services for the inaugural Filbasket season.

Camacho made the most out of the opportunity by averaging 13.2 points, 12.1 rebounds, 3.6 assists, 3.6 blocks, and 1.5 steals as he earned MVP honors and made the Mythical Team.

“Lesson I’ve learned is always be ready, always prepare yourself so when opportunity comes, you’re confident to grab it,” Camacho said. – Rappler.com