Facebook Twitter Copy URL
Copied
Check out this year's array of mini-LED gaming laptops as well, a smartwatch that charges through a user's motions, and wireless earbuds with a touchscreen-equipped charging case

MANILA, Philippines – Samsung is flexing its new display tech that’s able to both fold and slide, while more gaming laptops are pairing up with mini-LED displays, which rival some OLED displays while being more durable. Wireless earbuds also gain a new feature: touchscreen-equipped charging cases, while Lenovo announced some pretty interesting premium devices.

Here’s the first part of our round-up of the best gadgets at CES 2023!

The latest models of gaming laptops are announced annually at CES 2023. Here are some of the most impressive ones, carrying top-of-the-line options of up to a 13th Gen Intel Core chip, and an NVIDIA GeForce RTX 40 series GPU.

But they do have other improvements other than the expected spec boost. The Alienware M18 by Dell features a screen that’s 14% bigger than its predecessor. The Acer Predator Helios gets a display that can reach up to a 250Hz refresh rate for the smoothest gameplay, and gains mini-LED technology, which uses mini-LEDs for more precise control on contrast and brightness.

The MSI Titan GT will also make use of mini-LED technology, but with a higher 4K resolution (4096×2160 pixels) compared to the Helios’ WQXGA (2,560 x 1,600 pixels), with the brand calling it the “world’s first 4K 144Hz Mini LED display.” Mini-LED laptops first came along in 2020 but more manufacturers are pushing the tech this year.

Meanwhile, Lenovo’s gaming laptops (Legion Pro 7, 7i, 5, and 5i) will come with the new Lenovo LA AI gaming chip, that the brand says enhances performance through machine learning.

Like many other brands this year, ASUS ROG’s flagship entry, the Zephyrus G16 also features a mini-LED display called the “Nebula Display” that ASUS says will impress with its color and clarity. It has a 240 Hz refresh rate and a QHD resolution (2,560 x 1,440 pixels).

Samsung flexed its display know-how at this year’s show with the Flex Hybrid, a concept device that combines a foldable display and a sliding display.

The left side of the screen can be folded much like the screen on their foldable phones while the right portion features a screen that’s able to slide in and out. Samsung called it a “future smart mobile device” so in case your ultra-expensive Samsung Galaxy Fold is starting to bore you…

The JBL Tour PRO 2 and the Poly Voyager Free 60+ are premium true wireless earbuds with a new twist: they have charging cases that have touchscreens. On the touchscreen, you can adjust various parameters such as volume and noise-cancellation, as well as see battery status and phone notifications. Both devices have wireless charging as well.

A smartwatch that recharges itself by being worn

Love smartwatches but hate that you have to charge them so often? The BHeart by Baracoda might intrigue you. The company says it’s BMotion energy harvesting tech allows the watch to recharge itself entirely by motion, body heat, and environmental light. Like most smartwatches, it’s also fitted with a suite of sensors to monitor health data for both iOS and Android devices. It won a CES Innovation Award in the sustainability category.

A backpack that works with Apple’s Find My feature 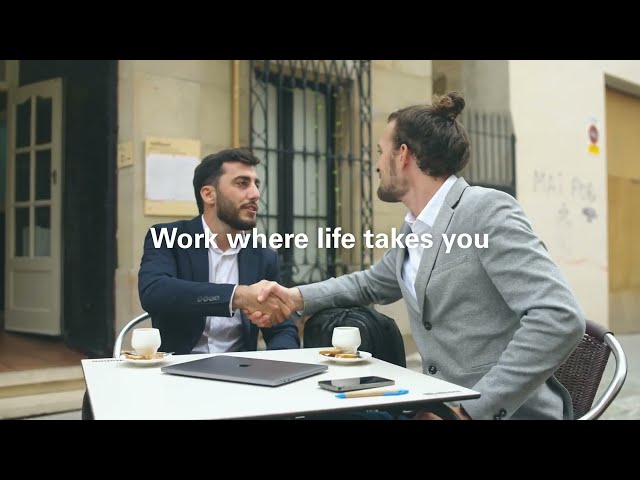 Here’s another CES Innovation Award honoree: Hyperpack Pro, whose most unique feature is its compatibility with Apple’s Find My feature. In case your bag gets stolen, this one has a built-in location module that allows you to easily locate it through Apple’s Find My.

Lenovo has some of the most adventurous designs this year from a big tech brand.

The Yoga Book 9i  a laptop with two full-sized OLED screens, which work as a laptop with a virtual keyboard, or with a stand and Bluetooth keyboard to mimic a multi-screen desktop experience.

The Tab Extreme is a premium Android tablet equipped with a 14.5 inch 3K resolution OLED display with a 120Hz refresh rate.

The Smart Paper is a digital notepad with an E-Ink display similar to the Kindle Scribe. E-Ink displays are easier on the eyes, and are designed to feel like reading on paper. The Smart Paper includes a stylus in the package for note-taking, with 50GB of memory, and voice recording capabilities as well.

The Yoga AIO 9i is a pretty all-in-one desktop. Much like the Tab Extreme looking to compete against the Apple iPad Pro, the AIO 9i with its distinctive “paper clip” stand is beautiful enough to probably steal some eyeballs away from the Mac.

Two companies, Bosch and Ring, have brought their new in-car security cameras at the show. Ring’s Car Cam features two cameras, one pointed outside like a traditional dashcam, with the other pointed into the car’s interior. If it detects movement or other issues, it can record the video automatically and alert the user through an app. A built-in speaker allows the user to yell at the potential intruder.

Bosch’s RideCare companion is a camera that is part of company’s subscription RideCare service, being marketed towards rideshare workers. In markets where it is available, the camera is paired with an SOS button that connects to Bosch’s emergency services, beaming the video to Bosch as well as location information. – Rappler.com

LOL Verifier: The device that won’t let you type LOL unless it hears you actually do it